Halloween is soon upon us, and this is the time for a scary movie. To end this month of fear and fright, a look back at Touchstone Pictures Cold Creek Manor. 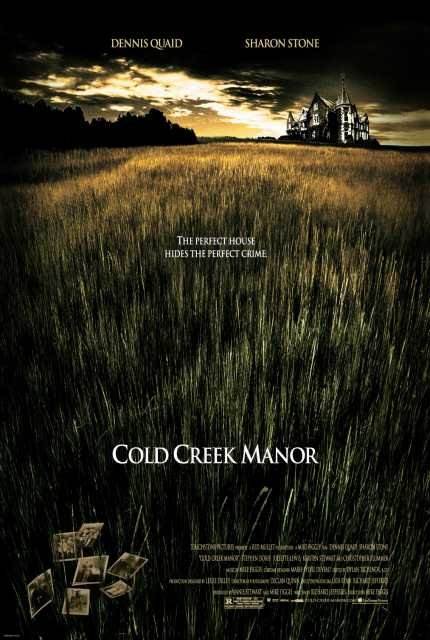 Cooper Tilson and his family decide to relocate from the big city to a small town away from the hustle and bustle of the metropolis existence. In their new home, which is beautiful but in need of work, the Tilson’s find out that even though they are the new owners, the house has a story to it.

As they settle in, Cooper starts to research the previous owners, and eventually meets Dale, one of the former owners of their house. At first it seems like everything is good. Dale is helpful as the Tilson’s adjust to their life.

Days go by and Dale proves to be anything but helpful. In fact, he is very dangerous, and the humble country life that Cooper hoped to bring to his family may very well be in jeopardy.

I have always liked Dennis Quaid. He’s an actor that brings so much passion and energy to the screen that despite all the failings of a movie, Quaid can make a character shine.

Sharon Stone is awesome. She has never got enough credit for her talent, and I think she is the perfect match to Quaid.

Christopher Plummer is a national treasure. Every part he has, Plummer makes it exciting, and whether he has a few scenes or the whole movie, I am captivated by his performance.

Cold Creek Manor is meant to be a creepy thriller, which isn’t that creepy, nor scary. I was hoping for a fright, and on this rewatching of the film, I found myself losing interest in the movie.

Sharon Stone is a great actress and does well with the part of Leah, but she isn’t given much to stand out, and ends up playing a stereotypical role that keeps Stone from excelling. It’s almost like the script purposely makes the audience want to dislike Leah, so they muted Stone from being able to make her presence known in the film.

If I were Cooper Tilson, never would I befriend Dale. There is not one moment on screen that says to me that Dale is trustworthy. Dale is a creep, and the fact that Copper is suckered into believing that he would be helpful makes me doubt his intelligence. Quaid plays the part well, and Stephen Dorff is great as the slimy Dale, but Dale Massie is a walking red flag to run away from.

I remember when Cold Creek Manor came out to the theatres, I was excited. The trailer looked interesting, and I was always game for a Dennis Quaid movie. When my wife and I went to see it opening night in the small town that we lived in at the time, it was sold out. I thought that was incredible and must mean that Cold Creek Manor was on its way to box office success.

When we finally saw the film a week later, I left the theatre disappointed. What I saw from the trailer was not what I got when I saw the movie. I wasn’t scared, nor did I even know what the plot of the film was. It was hard to understand the motivations of the characters because the characters are paper thin. The actors are talented, but they don’t have much to work with.

Rewatching this film has only confirmed what I have felt since that first viewing at the theatre.

Cold Creek Manor gets a 1 Reel rating. If you are bored and have nothing else to do, why not. However, don’t go out of your way to check in at Cold Creek Manor.

Next week, a look back at Oliver Stone’s Nixon.