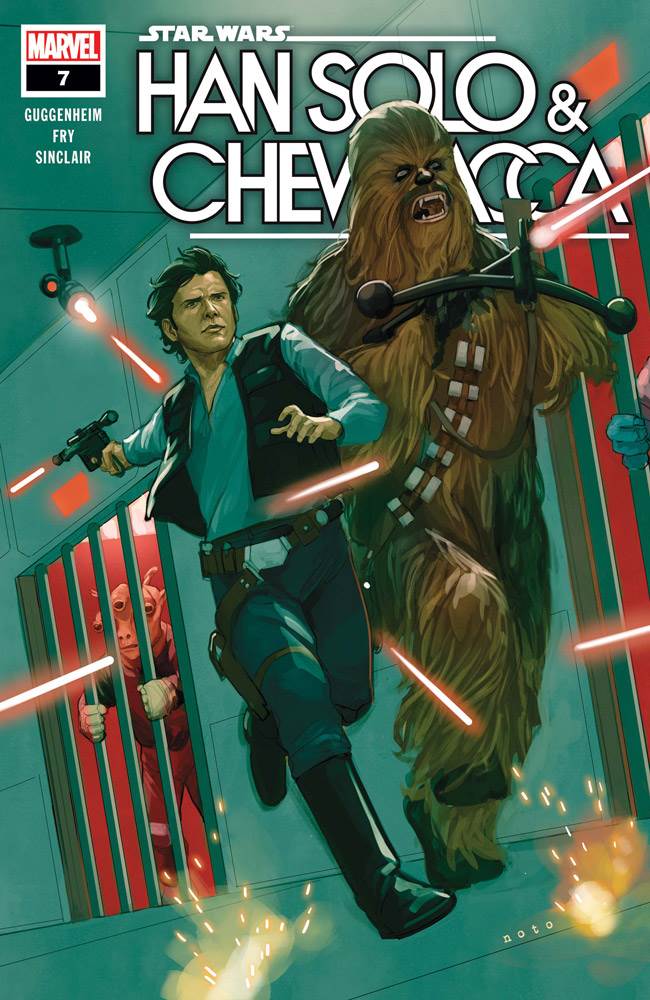 After the high-stakes dark-side shenanigans in this week’s issues of Star Wars: Doctor Aphra and Star Wars: Hidden Empire, it’s nice to settle into a fun romp with our old smuggler pals Han and Chewie in Star Wars: Han Solo & Chewbacca #7.

Unfortunately for this comic-book miniseries from Marvel, the timing worked out so that its jailbreak issue comes just a week after Star Wars: Andor finally wrapped up its own extended Imperial prison arc. Not that there’s much of a comparison between the two (again, Andor takes itself much more seriously than this comic does) but there was a tiny sense of been-there-done-that as I read this new installment. 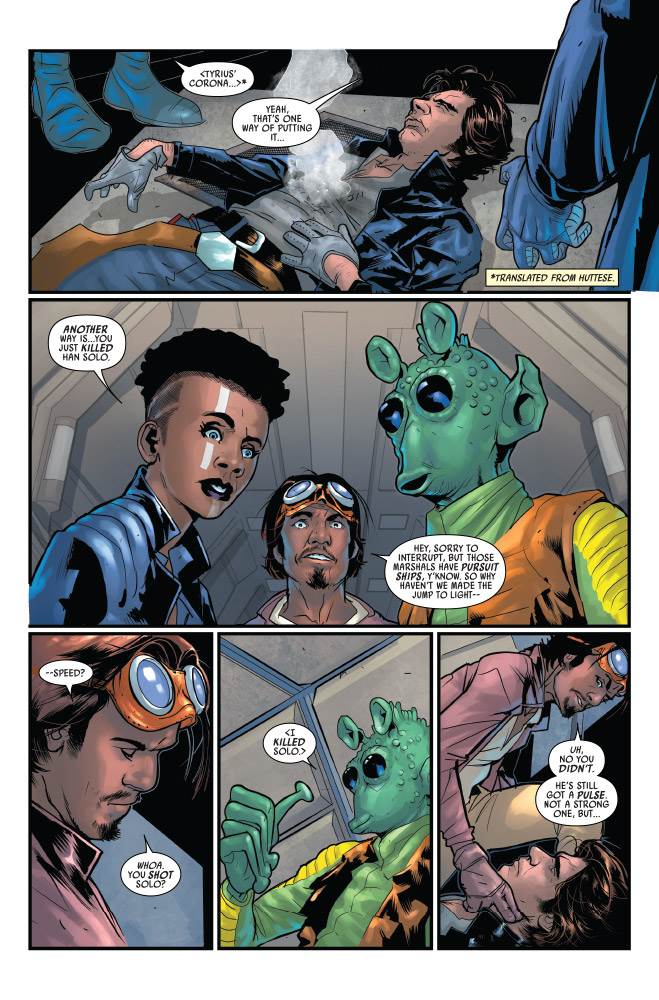 Han Solo & Chewbacca #7 begins with a flashback to explain how Han wound up wounded on the Outer Rim planet Escalon. It turns out he was dumped there after being shot by his rival Rodian Greedo, and now that he’s recovered he’s having trouble finding a way off this particular world. Meanwhile, on the prison planet Gulhadar, Chewbacca and his pirate queen friend Maz Kanata plot an escape with the help of their mischievous new friend Phaedra, who has Chewie swallow a custom-made pill that will make it look like he’s dead. When Chewbacca is taken to the prison’s morgue, Maz helps the homicidal mad scientist Dr. Evazan and his assistant Ponda Baba break free from their capital punishment in exchange for canisters of gas. Posing as a janitor, Phaedra takes out a couple of guards and the inmates use a supposed gas leak as a cover for their egress. Thankfully Han has been causing his own brand of trouble at the same time back on Escalon, because he shows up in a stolen ship just as luck runs out for Chewie, Maz, and Phaedra on the prison’s landing platform. 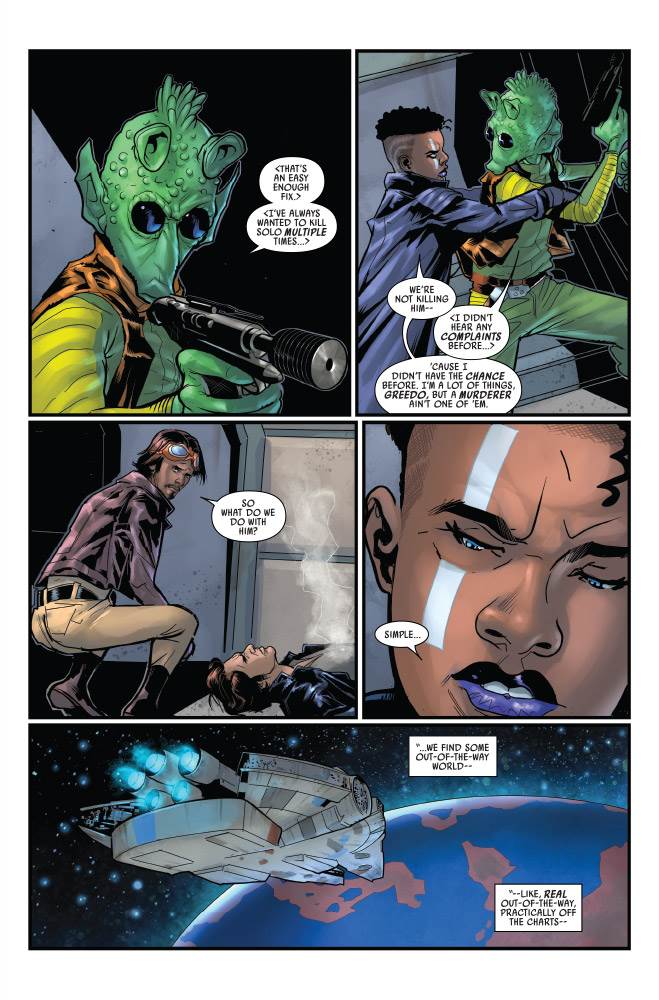 Then, after dropping Maz off on Takodana, it’s off to the Mos Eisley Cantina on Tatooine to confront Greedo and figure out what exactly happened to Han’s ship the Millennium Falcon. Ultimately I think Chewbacca’s stint in prison was a pleasant enough diversion, but its conclusion puts our heroes right back where they were– scrambling to get their bearings in the wake of the first arc’s heist mission and the betrayal by Han’s con-artist “father.” Still, it’s fun just to watch these characters interact with each other, and writer Marc Guggenheim’s partnership with artist Paul Fry is a winning combination that captures the spirit of the smugglers’ relationship, which obviously goes beyond a simple Life Debt. Since Grand Moff Tarkin shows up on the cover of next month’s issue, I’m guessing things are about to get pretty interesting for our protagonists. Avoiding Imperial entanglements… now that’s the real trick, isn’t it? 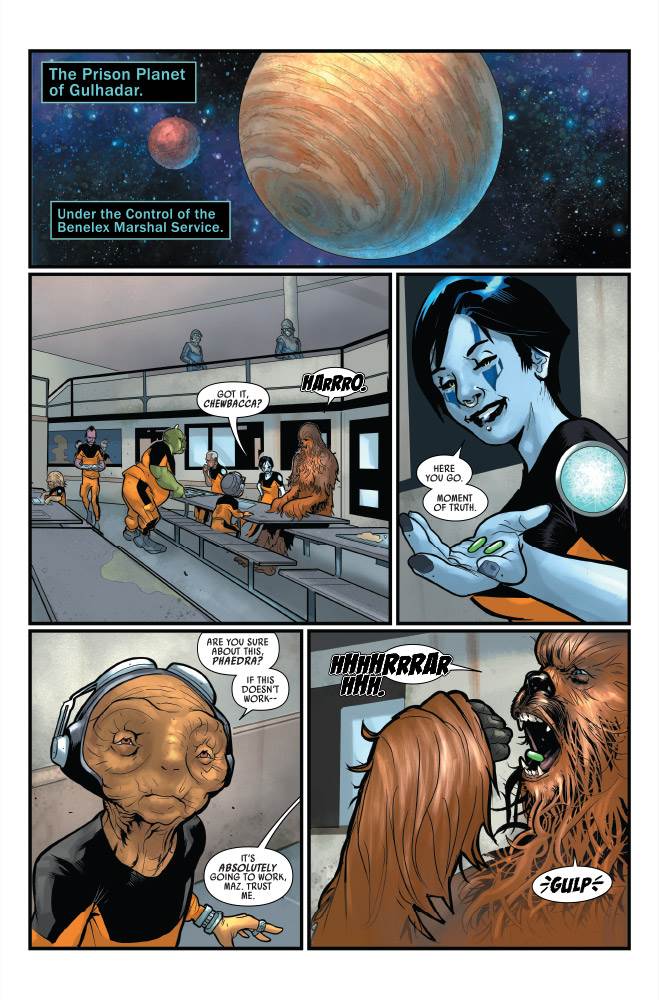