“It’s a show about male stripping, but it also goes pretty deep into the nature of the American dream, capitalism, assimilation, second-wave feminism, and racism,” Welcome to Chippendales creator, co-showrunner, and executive producer Robert Siegel said during a TCA press conference to promote the new Hulu original, which premieres with two episodes on November 22nd. “There’s a lot of really interesting intersections with all these themes. The feminism starts to get affected by the capitalism because Steve sees these opportunities. The club starts as this place where the tables are turned and women are kind of treating the men as sex objects, but then one thing Steve discovers is that if he lets men into the club after hours, he’ll make a ton of money.” Based on a true story, Welcome to Chippendales is full of sex, lies, love, money, and murder. “I didn't have any idea that there was this complex, interesting story behind it,” revealed Murray Bartlett, who plays Nick De Noia, a choreographer who turns the struggling male strip club around but also kickstarts a treacherous feud with the founder of Chippendales. “When they collide with each other, it’s explosive. It’s interesting that it’s called Welcome to Chippendales because it's like welcome to this fun male-stripper show, but really it's like, okay, get ready because you step into this world that has depth and surprises that you just don’t expect.” Without formal dance training, preparing to play a chreographer required a lot of rehearsals, but Murray found it to also be a lot of fun. “There's an energy that comes with the kind of dancing that’s involved in Chippendales and of that year and the music that goes along with it that is just infectious. And on those days, you feel kind of elevated in a way.”

“I had to train to be able to do it as well as they did,” admitted Quentin Plair, who plays Otis, the only Black dancer at Chippendales. “The first day that I was there it was a solo, literally dancing for 11 hours during the day, and from the beginning of it 'til the end, the energy in the building was the exact same, and it was through the roof. I remember Murray and Juliette [Lewis] actually had a scene and we were supposed to be silent, the music dropped, everybody was supposed to be pantomiming. And that coincided with the first time that I took my pants off and needless to say, we did not get that scene in that moment. Everybody screamed, we were supposed to be silent, we literally could not hear people yelling ‘Cut.’ I know for me, I was extremely nervous to do it ’cause, you know, it something I wasn’t used to. But when I actually did dance the first time and I heard the crowd and I really got into it, I realized it was oddly empowering for me, which I would have never thought stripping was my thing. I still don’t think it is, but it was empowering, it gave me some confidence, and I really enjoyed the entire process.”

“It was like Elvis when he was first gyrating and they had to film him from the waist up ’cause, Holy Toledo, if they thought male libido was scary, wait 'til you excite women, that’s a whole other energy force,” laughed Juliette Lewis, who plays Denise, a Chippendales groupie who ends up getting hired as the costume designer/den mother for the dancers. “I made up a whole backstory for her that she was in an oppressive, horrible marriage and that she came in and was born again with this kind of beautiful chi or male energy or whatever. And the dancers, everybody involved, that spirit was so beautiful and fun. And then she thinks she’s creating art, which, who’s to say it’s not? I mean, everything about it is really cute and funny from her perspective. The story is not what I would call cute, but there are elements that are quite comical and riotously so that people are going to really have fun watching.” 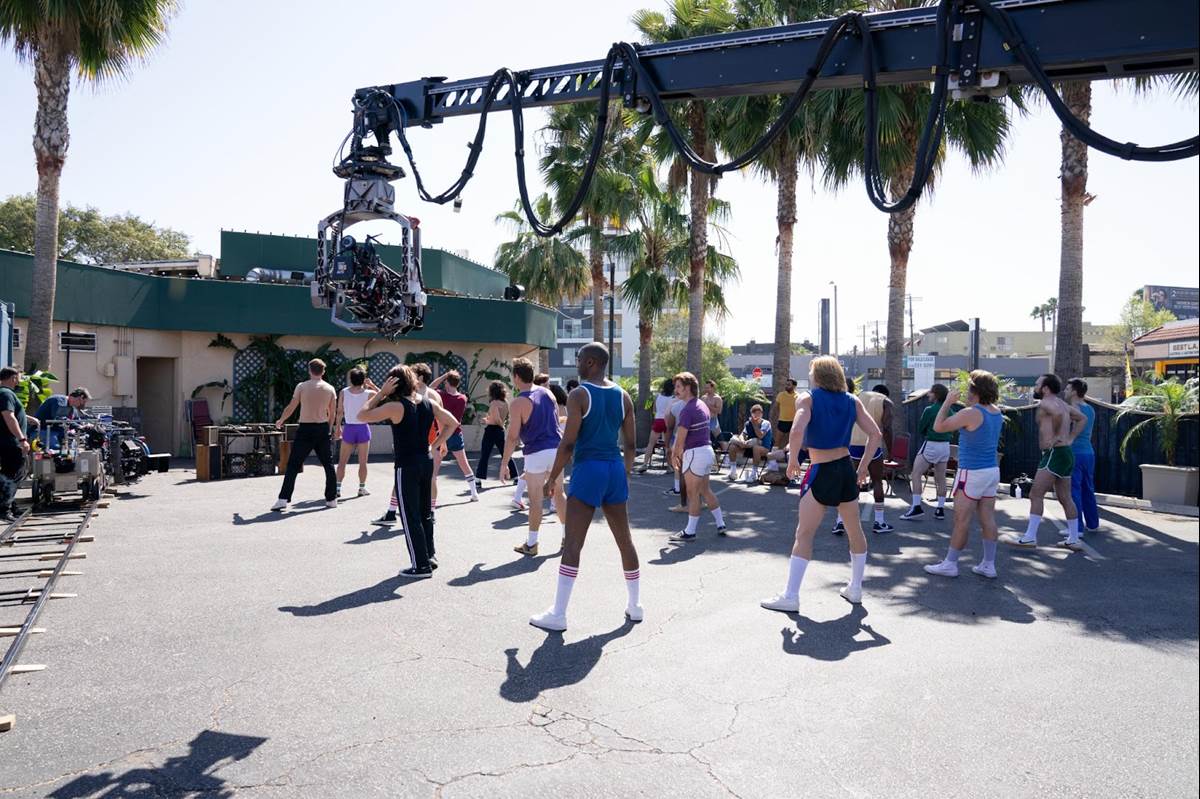 “One of the more special points of the Chippendales story was that it was tethered to the movement of women in this country and them gaining rights and finding their voices,” added Annaleigh Ashford, who stars as Irene a business-savvy accountant who chams Chippendales founder Somen “Steve” Banerjee. “One of the things that was most interesting about the club is that it challenged our hetero-normative views of the way that women are supposed to behave in a sexual way. And so that has always been a thread of the show that we found was important to highlight. Also, it was a club and a world dominated by men, created by men, but really the people who made it happen were women because they showed up every day and they were provided with the space to be free and unabashedly themselves. And even though I think my character wasn't one of the women who came in the club and was throwing out the dollar bills, she wanted to count the dollar bills, which I find even more interesting. A woman who’s really running the show, which a lot of women in that era had to hide behind their husbands to run the show, and I think she was one of those ladies. You know, the engine really moved because of her. And I think the complexities of being in a male-dominated space as a woman in that time, you had to really show up as a lady and undercover-operate as a man. There was a lot of that going on. So I find the glamour and the magic of the show is fabulous, but underneath it’s tethered to, I think, some really incredible themes that are still palpable today.”

“This is the best group of actors I’ve ever worked with, as actors and as human beings,” boasted Kumail Nanjiani who stars as Steve Banerjee and also serves as an executive producer. “I’m going to get emotional but I’ve learned so much from working with them as a person, but also as an actor.” The role is a complicated one that allows Kumasi to showcase his full range as a character who walks a fine line between right and wrong, often stepping over it. “He did create this space where women could really express themselves in a way that they had not been able to in a big group like that. However, that was not why he created that space, right? He was trying to just make money. That was his main thing, he sort of hit on a great idea at just the right time. And then he used the feminism angle when he needed to, to become more successful. But, to me, that was always interesting about him is that he did ultimately a really exciting thing that was just for the service of, in some ways, himself.”

Hop aboard the rollercoaster that is Hulu’s true-crime drama Welcome to Chippendales. The first two episodes are now streaming and new episodes release every Tuesday through January 3rd.