Things get both sexy and cheesy in the third episode of Welcome to Chippendales, appropriately titled “Velveeta” – the sexiest of cheeses. Hulu’s true-crime drama jumps forward in time by two years for this third installment, with tensions rising amongst the key players as the club's success continues to climb. Here’s a recap of everything that occurred in “Velveeta” (the episode, not the boxed cheese).

Somen “Steve” Banerjee (Kumail Nanjiani) returns to Bombay, India for his father’s funeral. Back home for the first time in six years, he finds that his mother (Mona Sishodia) blames him for his father’s death. She claims that had he stayed home and taken over the family business, his father would have quit working at a reasonable age and wouldn’t have suffered this fatal heart attack. Somen argues that any other parent would be proud that their child went to America and became successful, but she refers to his business as “not respectable.” America, the land that attracted her son away, is so unappealing to her that she refuses Somen’s gifts, including several boxes of her favorite imported cheese, Velveeta. She reminds her son that they are a middle-class family and didn’t need America to save them from anything. 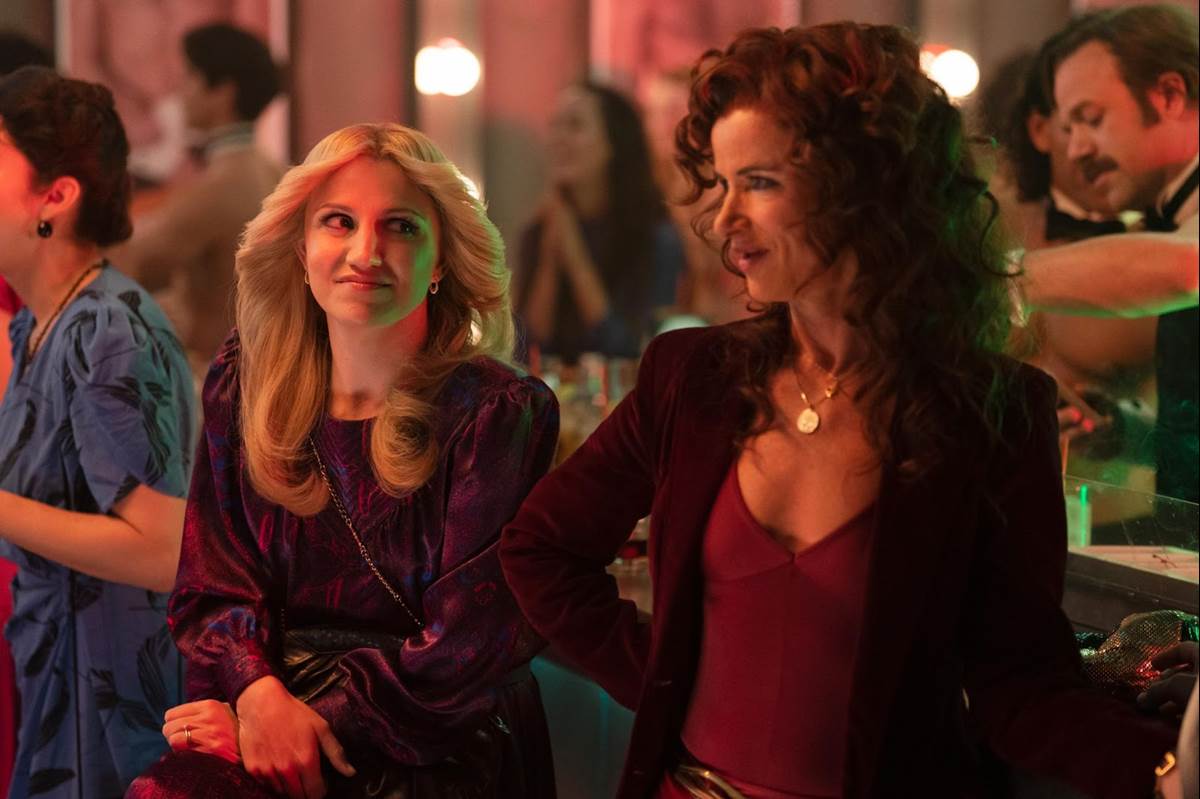 Steve tried several times to reach his wife Irene (Annaleigh Ashford) by phone while away, leaving voice messages full of business reminders, but ending each message with “I love you.” One particular night went way later than expected when Nick De Noia (Murray Bartlett) and Denise (Juliette Lewis) debuted a now bellboy number called “Room Service” that went over incredibly well. After the show, Irene found Nick on the verge of a panic attack in the office she shares with Steve, worrying that he would never be able to top this routine. Cheering him up, he mandated that she join him and Denise at a disco club to celebrate. While there, Irene discovers that Nick is bi when he pursues a young man named Derek (Will Peltz). At the bar, Irene orders her usual Coca-Cola, but Denise convinces her to try a different kind of coke that night. Drugged out on the dance floor, Denise abandons Irene when she sees a handsome young man on the dance floor and introduces herself to Lance (Spencer Boldman). Nick and Denise leave the disco with Derek and Lance, leaving Irene abandoned on the dance floor.

On his last night in India, Somen couldn’t sleep so he went downstairs to look around his father’s office. Standing in Banerjee Print Works, he remembers his father (Ravi Kapoor) teaching him how to use the press as a child (Suriyan Di Ianni). He picks up a single-sheet calendar his father was printing when he passed away. Although he was quiet, Somen’s mother woke up and came down to check on him. She remembers bringing lentils to him and his father while they were working and how Somen accidentally spit some into the press when they were too spicy. “Come to California,” Somen asks his mother, offering her a home in his guest house. “Son, my home is here in India,” she denies him, adding that she is worried about what his wealth and success has done to him. “Some people are not meant to be rich.”

That same night, Denise cuddles with Lance and admires his body, claiming that he doesn’t have a single flaw. “It’s like you were created in a laboratory,” she says, suddenly having an epiphany and running out of her bedroom, across the living room, and into Nick’s bed, edging out Derek to share that she had a brilliant idea for the show. In a montage, we see them working together all night.

Steve finally gets through to Irene on the phone, confused because his wife sounds like she just woke up, but it’s 7:10 pm. She tells him about her night, that she went out dancing with Nick and Denise, that she took drugs, and slept the day away. Steve is angry, his voice building to a yell. Cut to Steve back in L.A. in a taxi on his way to the club from the airport. When he pulls up, he finds a stranger on a ladder replacing string lights above the door. The man is Ray Colon (Robin de Jesús), a handyman hired by Irene while Steve was away who wasn’t aware of Steve’s existence. Steve continues inside, finding Nick and Denise leading a rehearsal with a live band accompanying them. They’re discussing their idea of a “Dr. Hunkenstein” monster made up of each Chippendales dancer’s best assets, with the finale revealing Lance as the perfect specimen. When Irene sees Steve, she rushes to give him a hug and a kiss, but he just wants to know what he’s seeing. She explains the number to him and he shuts it down, telling Nick that the idea is “not respectable” and calling the concept “sick and demented.” When Nick starts to protest, Steve snaps, yelling that he and all of the dancers are his employees and he is the boss. Nick storms off stage to the dressing room. We see Ray watching, his eyebrows raised with intrigue.

Denise follows Nick to the dressing room and tries to calm him down. Nick is so angry and believes he and Denise are the two most responsible for the success of Chippendales, suggesting that they leave and start their own competing male strip club. He adds that except for Otis (Quentin Plair), the dancers would likely follow them. Denise argues that Steve just returned from his father’s funeral and may be more open to their show idea in a few days. Nick says it goes beyond that, complaining about Steve’s budgetary restrictions for the show and quoting the owner as referring to the current show as “sufficiently spectacular.” Nick sees Steve as being devoid of creativity and only being concerned with his bottom line, calling Steve “crazy.”

Irene goes up to the office to try and calm Steve down. He accuses her of being on Nick and Denise’s side when she defends the number. He’s mad at her for going out with them, trying coke, and hiring a handyman without her. “You do not do the hiring around here, I do!” he snaps. Irene stays calm, asking her husband what happened in India. “Nothing,” he snaps. “You’re such a bad liar,” she responds, shaking her head. That night, Irene enters the bedroom to find Steve unpacking his suitcase. “Can we try again?”, she asks, noticing that Steve brought back all of the boxes of Velveeta he took to his mother. “Steve, you gotta let me in,” she begs, asking him to talk to her. She gives him a kiss and turns to leave, saying that she will be watching TV until he decides he’s ready to be loved. Alone, Steve finishes unpacking his suitcase. At the bottom is the calendar he brought back from his dad’s printing press. He seems to have an idea.

The next day at the office, Ray comes to Steve to applaud his leadership style, referring to him as an “apex predator.” Steve asks for more information about Ray, and he shares that he can do electrical, plumbing, carpentry, HVAC, and anything else Steve needs, adding that he knows Kung Fu and dabbles in photography. Ray shares that he was raised in the Bronx and is of Puerto Rican descent, although he never goes there to visit his relatives. With Steve having just returned from his first trip home in 6 years, he suddenly becomes talkative. He tells Ray that his father died and gives him a few details he withheld from Irene. And then he gets a look in his eye. “Did you say you do photography?” 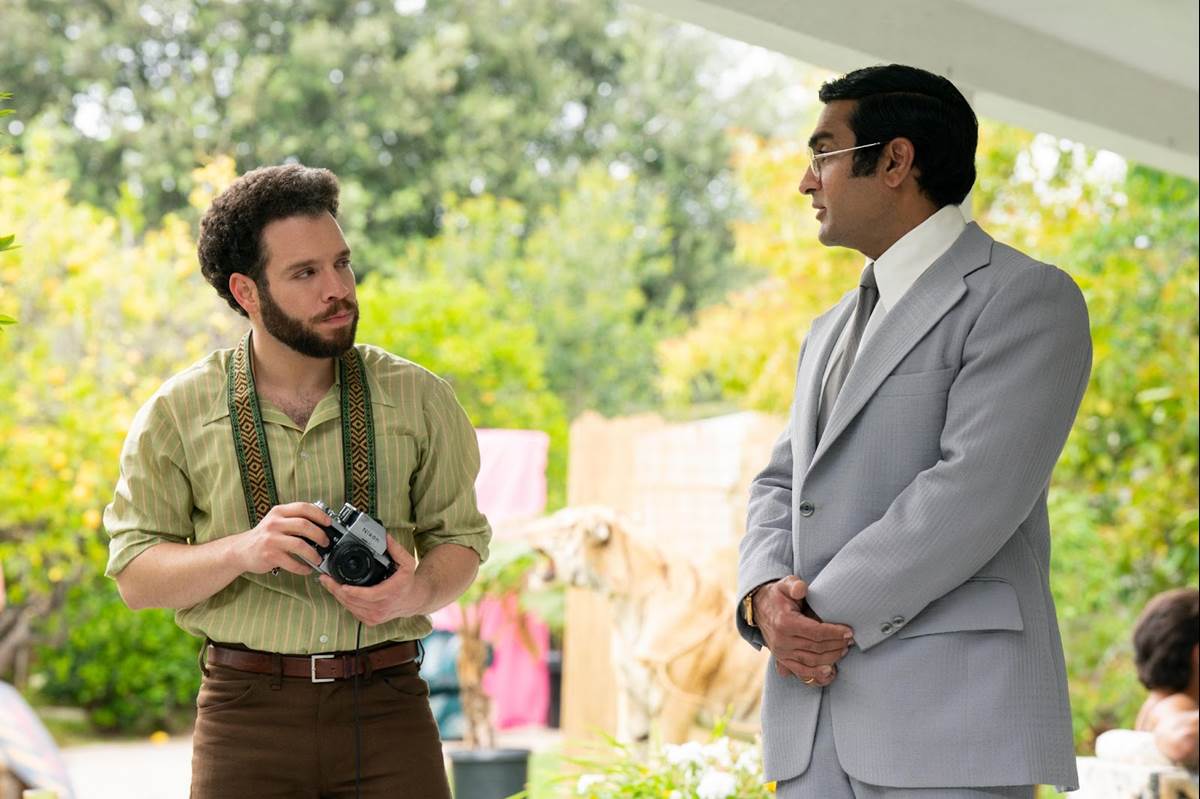 One day, Nick and Denise arrive at Chippendales to find the place empty, except for the bartenders. Nick asks Bobby (Darren Lipari) where everyone is. “They’re at Steve’s,” the bartender responds. They look at each other dumbfounded. Nick drives them both to Steve’s house and when nobody answers the door, he jumps over the fence to open the gate for Denise. They find Steve’s backyard full of shirtless hunks, with Ray snapping photos of one in a wicker chair while Steve gives instructions. Nick is furious that he wasn’t informed that his dancers would be shooting a calendar that day and his ego is bruised that Steve didn’t ask him for any creative input. Nick is also incensed that Steve has hired 6 additional models for the calendar to fill out all 12 months since the club only has 6 dancers on the roster. In the end, Steve asks Nick to leave. He’s so angry he abandons Denise. In the final scene, Nick arrives at an airport, books himself a first-class ticket to New York City, and heads toward the plane.

Welcome to Chippendales will return on Tuesday, December 6th only on Hulu. Next week’s episode is titled “Just Business.” Here’s the official episode description.

As Steve's new calendar flies off the shelves, a fed-up Nick makes a pitch to New York investors. A snub from Steve provides Otis with a sobering wake-up call.