“We made a friendship map,” Darby and the Dead director Silas Howard revealed during a press conference to promote the new teen comedy from 20th Century Studios, now streaming on Hulu. Movies are usually shot out of order and with the film’s two lead characters forced together – a medium named Darby and her recently deceased bully Capri – the production needed a way to reference where the two were in their relationship on any given scene. “Every time there were these fights, we would just plug into that. Like, what does this fight mean about the friendship? What is actually happening? They're reverting to these childhood hurts… Showing this way of not competing but pushing each other to our best selves, I think it really highlights that type of friendship. Sort of tough love in places and admitting wrongs. And I think we just don't see a lot of that and I feel like that's the main thing. The friendship map [was] the engine of the film.” 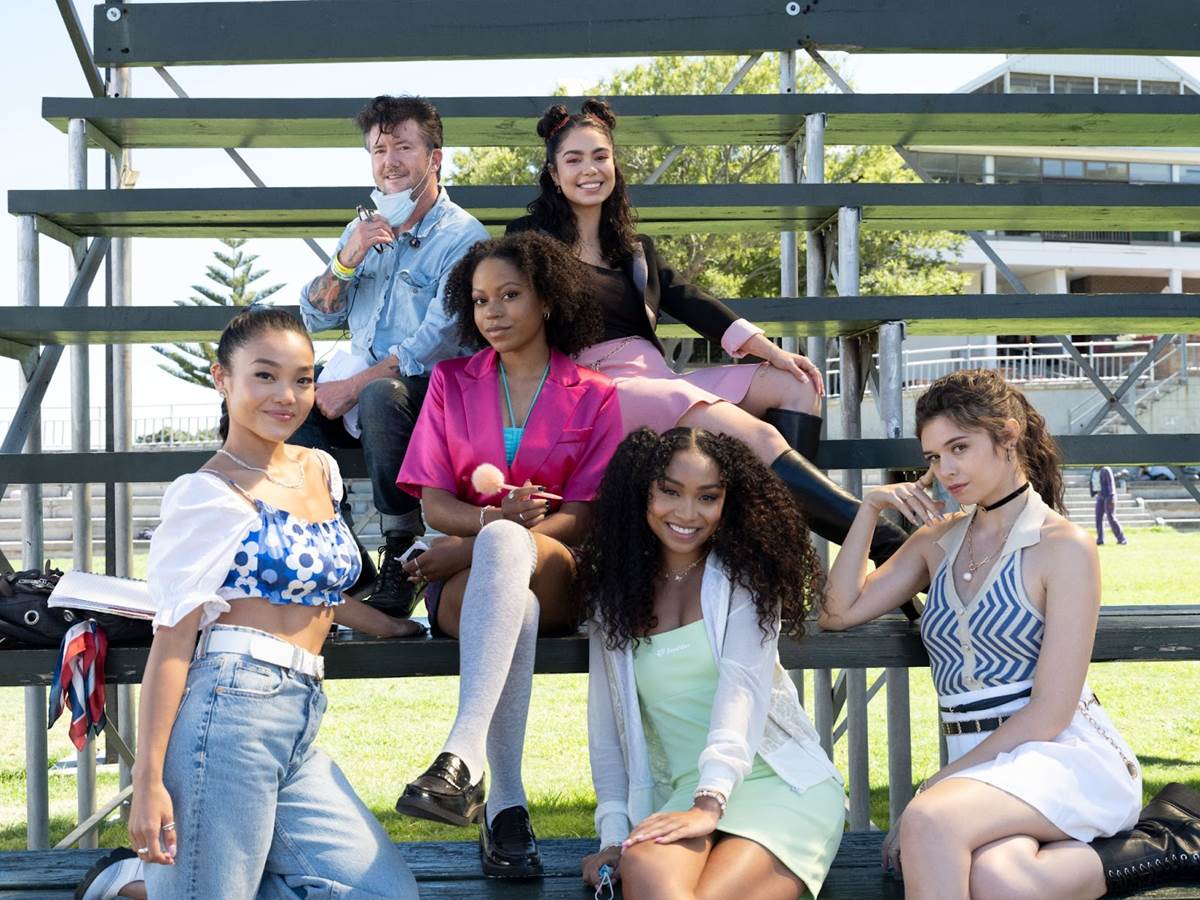 In addition to Darby’s journey from enemies to friends with Capri, you, the audience, are her friend through lots of fourth-wall-breaking moments. “Honestly, it was a little difficult to adapt to at first, just how much dialogue there was and needing to play all these different beats, and to Auli'i's characters who was not supposed to even be visible by other people,” actress Riele Downs explained, who stars as Darby Harper. “But it became natural pretty quickly, believe it or not. I guess maybe being more of an introverted-slash-introspective person, you kind of live that out in your life anyway a little bit. For example my sister, I'm very close with her, so if we're in a public space, she might be that camera person. And Silas and I talked a lot about it, like, who is the camera to Darby? And who would that be for me? So, I sort of just related it to people in my life who I give those reactions to or those  sort of nods to, and it kind of came together.”

“It was really fun,” gushed Auli'i Cravalho about her first villainous role. “I've never played a character like Capri before and there was a lot of fun backstory. My favorite part about being an actor is working on the back story. Especially for Capri, I didn't want to hate her. Like, I have to be her, I must love her, I must understand where she's coming from, even if she's crass, even if other people see her as mean. I'm not mean, I'm just honest, you know, figuring that out. And then my voice immediately pitched up and I talk really fast. I talk with my hands because they gave me really beautiful nails. And even working with the hair stylist to see how the hair would change, I remember giving points of, like, I want to feel like I'm going to war and whatever that would mean. There was a lot of collaboration between Silas and hair and makeup and then Riele as well. There was a lot of room to play, and I really appreciated that.”

Auli'i was given the flexibility to add her own backstory to Capri and her co-star, Chosen Jacobs, found the project to be equally collaborative. “Great leadership is allowing your team and trusting them to do their job well,” the actor shared, who plays Alex, a boy who seems to like and understand Darby for exactly who she is. “They made us so comfortable as actors to really put our ID on these characters. We talked about for my character Alex, I sent [Silas] PDFs of style points that I thought my character would wear, but when I got to set, it was actually there. That doesn't always happen and he just really empowers us as actors to go out there and perform in a way that's true to us. I feel like he made the environment comfortable for us to be our best selves.” “Getting to work with Riele and Auli’i and Chosen, and watching them do their thing every day, and watching them come to set and take on the character was one of my favorite things,” shared Asher Angel, who plays Capri’s boyfriend James. “It’s nice to be in an environment where you’re able to learn from others, especially as an actor.” Asher also explained what attracted him to the role. “He's super vulnerable and he's obviously going through a lot. I feel like other people in the world will really be able to relate to that because when he finds Darby, she's really the one that kind of brings him out of his shell. For the most part, it's all super internal, and he's kind of going through it by himself. It's a lot to take in, and once he starts hanging out with Darby, that really changes him for the better. And he's really able to open up to her and feel like he has someone that's there for him. I think that's super important. When people watch it, I think they'll see that.”

Capri’s posse of mean girl besties are played by Nicole Maines, Kylie Liya Page, and Genneya Walton, who all found it fun to play bad. “We had such a blast getting to do all those scenes,” Nicole reminisced. “The more we got to play with these characters, and the more we got to play with each other, the opportunities for improvisation just grew so much. By the end of the film, we were given the green light to just do whatever stupid thing popped into our heads.” Genneya added, “We could’ve fully taken all of the Mean Girl group tropes, but we were trying to find more depth to that and truly show that we’re just teenage girls that happen to be popular and cheerleaders. But are also still trying to find their way throughout life, and what it means to be a teenager in this current digital age.” Kylie agreed, saying “It was very interesting combining a humorous depiction of these characters and putting them in something very, very traumatic and observing how different people are dealing with the grief. We have the grief of the dead people versus the grief of the living. And I think playing with all of those different dynamics was so fun.”

Darby and the Dead takes place in Los Angeles, so it may come as a surprise to learn that it was actually filmed in South Africa. “We were given a few options of where to shoot the movie, and ultimately, we ended up in Cape Town,” producer Adam Saunders revealed. “We had talked at one point about getting rid of some of these trees and mountains and things that don't feel specific to some place in Los Angeles or someplace in California, but we ended up leaving it because it felt like this idyllic, utopian, magical place that still feels California-ish, but it's so aspirational almost in how it looks, and I think that's kind of what we got from being in Cape Town. And just being in Cape Town was an incredible experience on its own.” 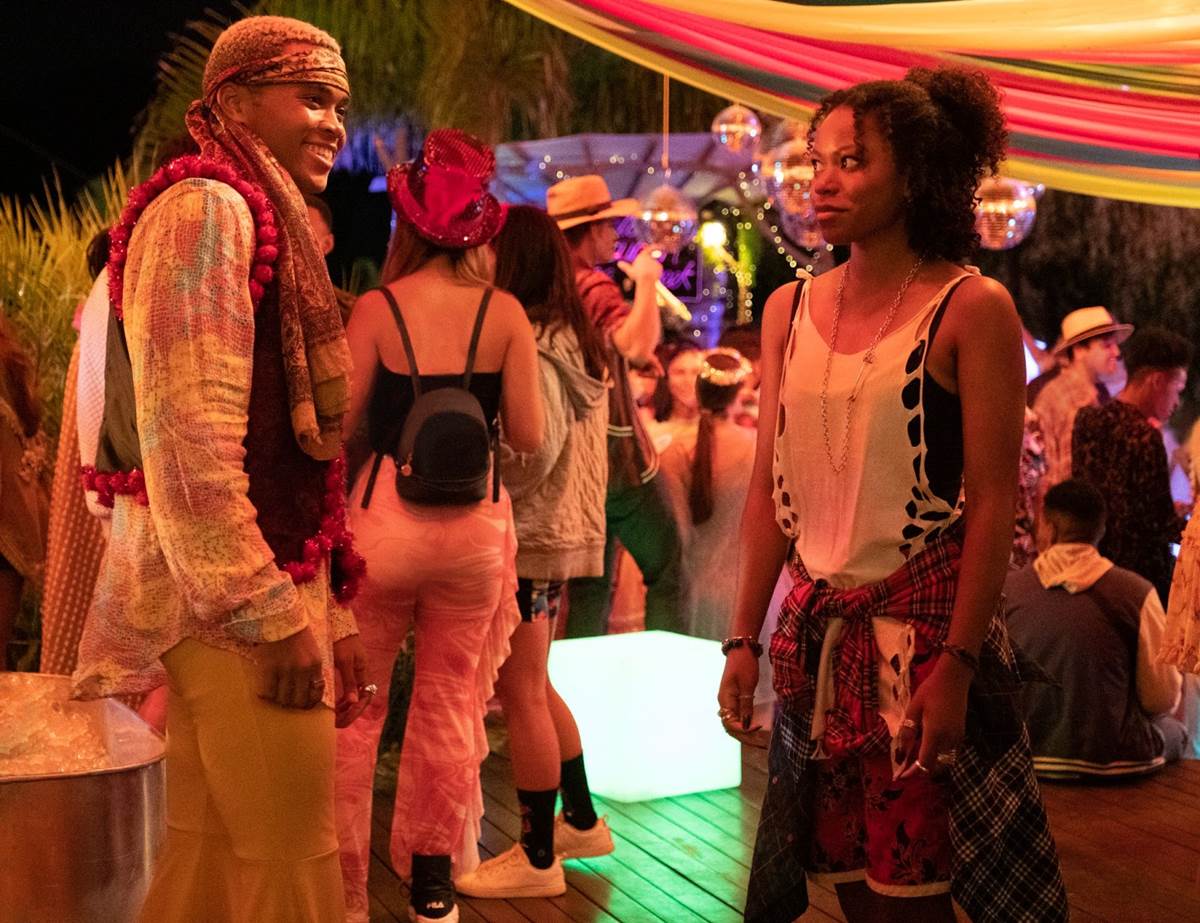 “There was a great ability for all of us to bond,” concluded producer Eddie Rubin about the experience of filming abroad. “We lived in this apartment complex where we were all within walking distance in one complex in the harbor. It was amazing. Nowadays in making film, sometimes it's hard to get that bonding outside of set… So, we were really fortunate to have that ability to create our own little bubble in this community and to see each other and interact and get to talk about the characters and what we're doing the next day. And what's amazing, and what this cast and what Silas did here, is you have an ensemble cast, and you have a lot of characters. But I truly believe that everyone will walk away from this film remembering every single character because everyone here brought something and makes their own so unique and it was amazing to see come to life because some of it wasn't on the page. Silas and the cast brought it out, and I think people will be really surprised and make sure as people are watching that you're listening. A lot of these characters have little one-liners that go quick, but they are fantastic. So, it was a joy, and South Africa, the crew there was incredible. The local cast was amazing, and we could not have had a better time there, and we're so grateful to have had the opportunity to get to travel across the ocean and make this film while getting to experience the beauty of South Africa.”

You can see Cape Town double as Los Angeles, the voice of Moana play a mean ghost, and Riele bring Darby to life now in Darby and the Dead, streaming exclusively on Hulu.