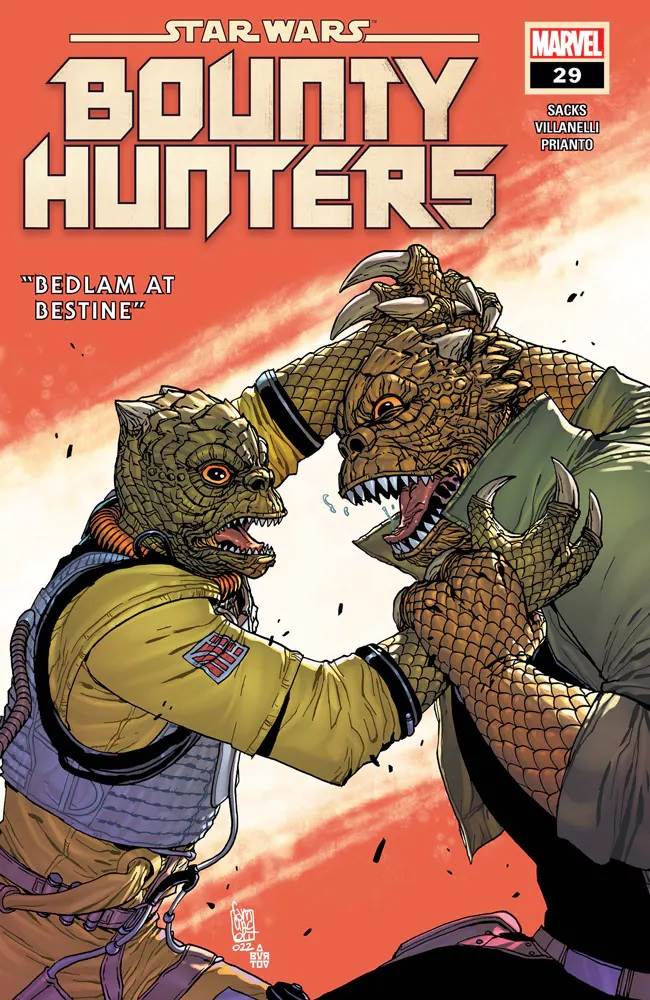 The burgeoning conflict between the Crimson Dawn crime syndicate and the Galactic Empire spills over into the pages of Marvel’s ongoing Star Wars: Bounty Hunters comic book in issue #29, out today.

When we last checked in on our titular antiheroes, they had been enlisted by Crimson Dawn to stop a shipment of Imperial supplies headed to the planet of Bestine. But little do they know that the crack team the Empire has put together to counteract the hunters’ mission is headed by their former ally Beilert Valance. 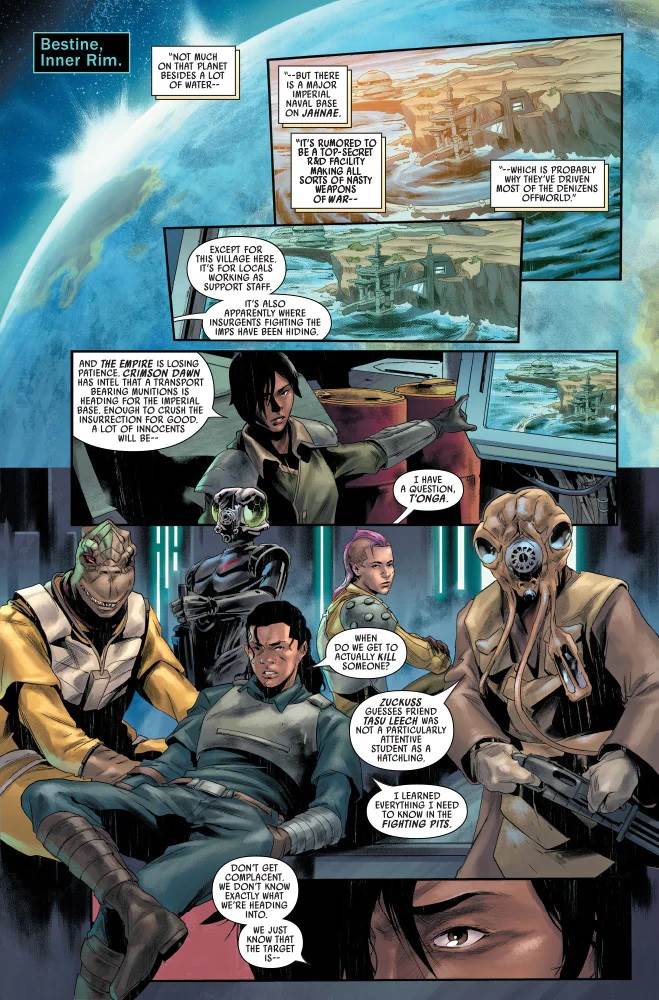 T’onga’s crew and Valance’s current Imperial squad are on a collision course for wackiness (or maybe just combat), and Beilert quickly figures out where the Crimson Dawn operatives will strike, even before he knows who they are. The action kicks off pretty early on in this installment, with T’onga and company (Losha, Tasu Leech, Zuckuss, and Bossk) boarding the Imperial transport while the droid 4-LOM stays back to guard their ship and have it ready for use as a getaway vehicle. Meanwhile on the jungle planet Son-tuul (first seen in the Star Wars: Doctor Aphra comic), assassin droid IG-88 shows up to clean house for the Empire, who have discovered that the Son-tuul Pride Syndicate has been working with Crimson Dawn. Funnily enough, I was just thinking about how IG-88 had never made an appearance in Bounty Hunters– even after his current-canon survival of the events of The Empire Strikes Back was established in the War of the Bounty Hunters crossover– and suddenly I turned the page and there he was. It was great to see him in all his full-panel splash-page glory, and artist Paolo Villanelli (collaborating effectively with talented colorist Arif Prianto) is already doing a terrific job rendering him for what I believe to be the first time. 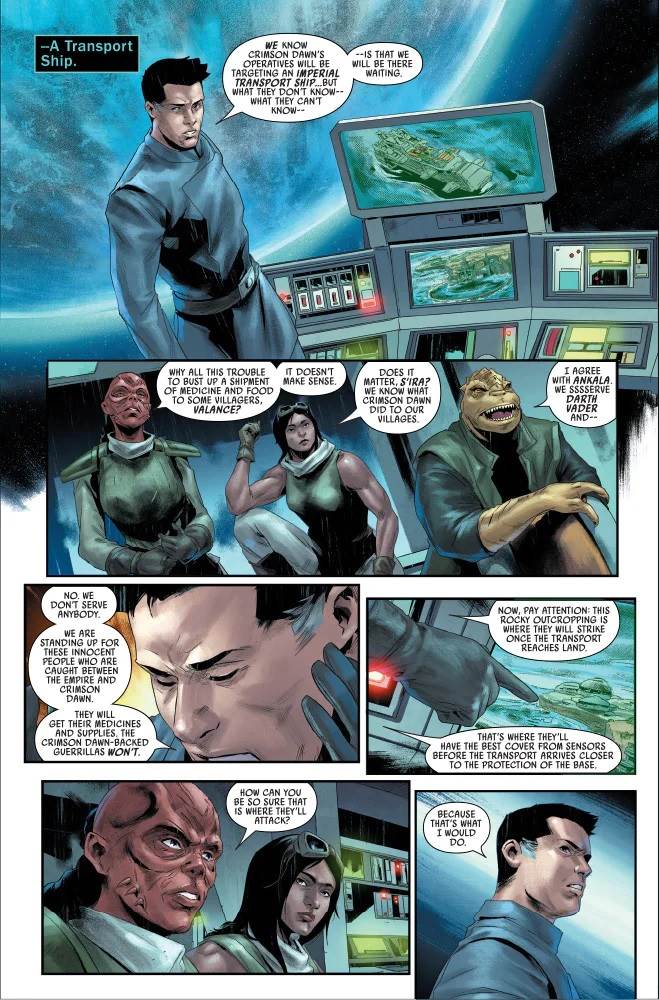 After IG-88 completes his task, we see the next bounty he’s assigned to track down for the Empire: General Vukorah of the Unbroken Clan, who doesn’t appear in this issue otherwise. Then we cut back to Bestine, where Tasu Leech and Bossk are ambushed by Tanka (a member of the so-called “Revengers,” a team assembled by the Empire to take on Crimson Dawn in the Star Wars: Darth Vader title), and it’s a thrill to watch the two reptilian Trandoshans on warring sides go mano-a-mano after Tasu is taken out of commission during the fight. And after a half-dozen pages of fisticuffs, Bossk emerges victorious by using his wits to outmaneuver Tanka’s obviously superior strength. But the bounty hunters haven’t accomplished their goal quite yet, as T’onga, Losha, and Zuckuss find themselves pinned down by Imperial forces, and then– in a cliffhanger reveal– discover their enemy is being led by none other than Valance himself. It’s an extraordinarily exciting issue overall, and I dare say it may rank among my favorite chapters of the Bounty Hunters comic, mostly thanks to the well-choreographed action and compelling variety of characters and locations. My only hope is that writer Ethan Sacks and his artistic cohorts can keep up the quality as the palpable dramatic tension between factions rises. To whose allegiance will Valance remain faithful: his freelance friends or the Empire and Vader? We’ll find out next year. 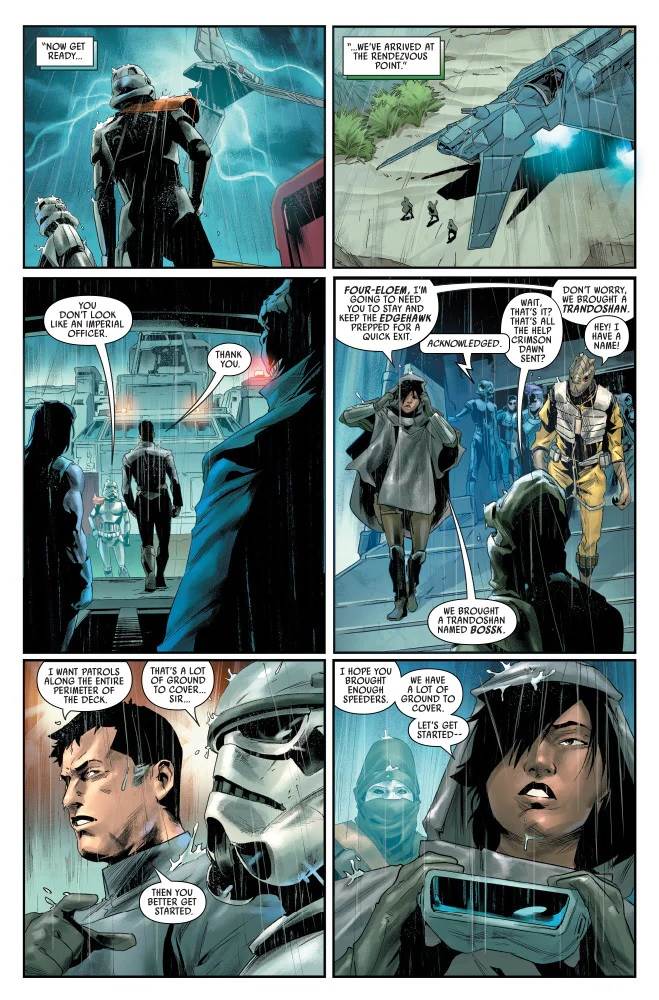