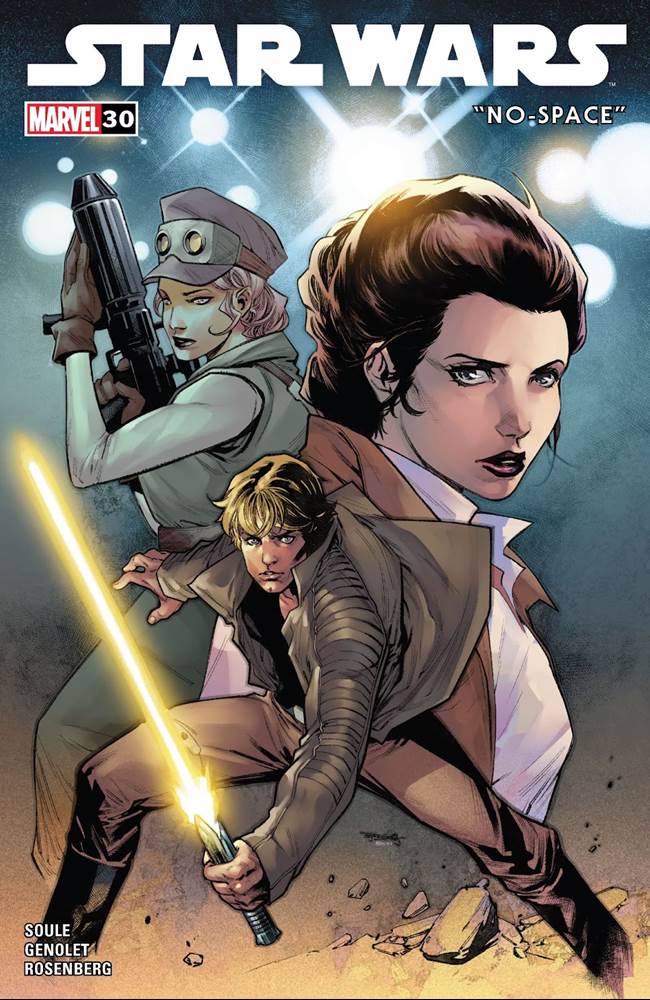 One of the things I love the most about the current era of Star Wars storytelling is its interconnected nature, and nowhere is that more evident than in the expansive world of Lucasfilm Publishing. Not only is the company in the middle of its ambitious multi-year Star Wars: The High Republic initiative, but it has also made the effort to connect that era (set hundreds of years before the Original Trilogy and the events of the Skywalker Saga) to other points in the larger narrative.

Those connections have come up again in today’s new issue of Marvel Comics’ flagship Star Wars title, in which Luke Skywalker, Princess Leia, Chewbacca, and friends have used a Nihil path engine to travel to a location from The High Republic known only as No-Space. 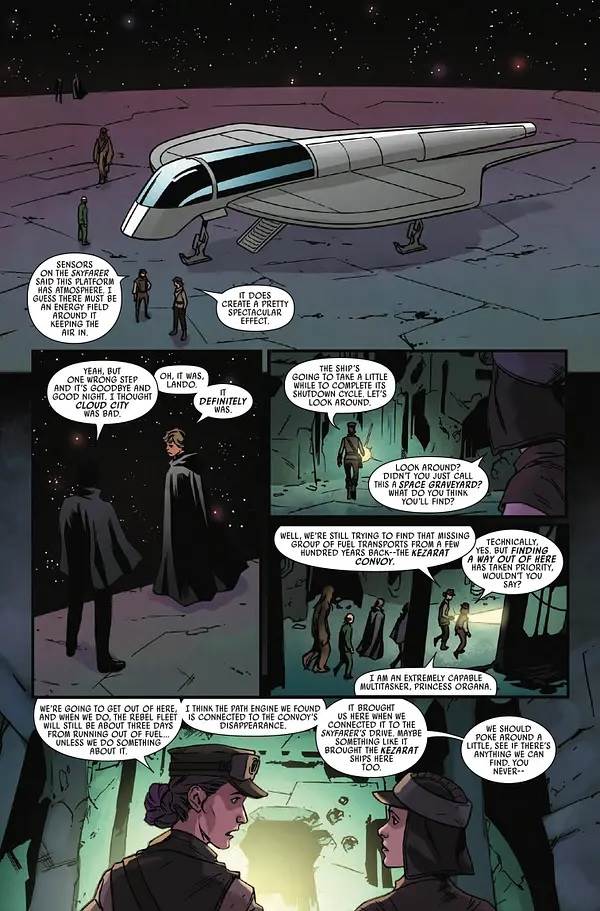 After a two-month gap since the previous issue, writer Charles Soule and artist Andrés Genolet are back with more stories set between The Empire Strikes Back and Return of the Jedi. Star Wars #30 begins with our group of protagonists having jumped through hyperspace using their stolen Path engine, and winding up in No-Space, which the evil band of marauders known as the Nihil called their home during The High Republic. They’ve come there in search of the fabled Kezerat Convoy, which disappeared centuries earlier and may be carrying much-needed fuel. Unable to jump away for thus-far unexplained reasons, the gang decides to explore the abandoned platform they found hovering in space, protected by an invisible energy shield– I believe this to have once been the Great Hall of the Nihil. There, they come across a fairly creepy young boy who calls them “news” and happily takes Leia’s rations, which he refers to simply as “flavors.” He doesn’t shed much light on the situation, but he does warn our heroes about a danger posed on the platform, which they soon discover is a whole mess of kill-droids out to eliminate anyone and anything in their path. They can’t return to their ship, but they are rescued by another space-faring vessel that swoops in from out of nowhere, in which a voice immediately instructs them to dispose of their various weapons. They hesitantly comply, and then– much to their surprise– are taken to what remains of the long-lost Kezerat Convoy itself. 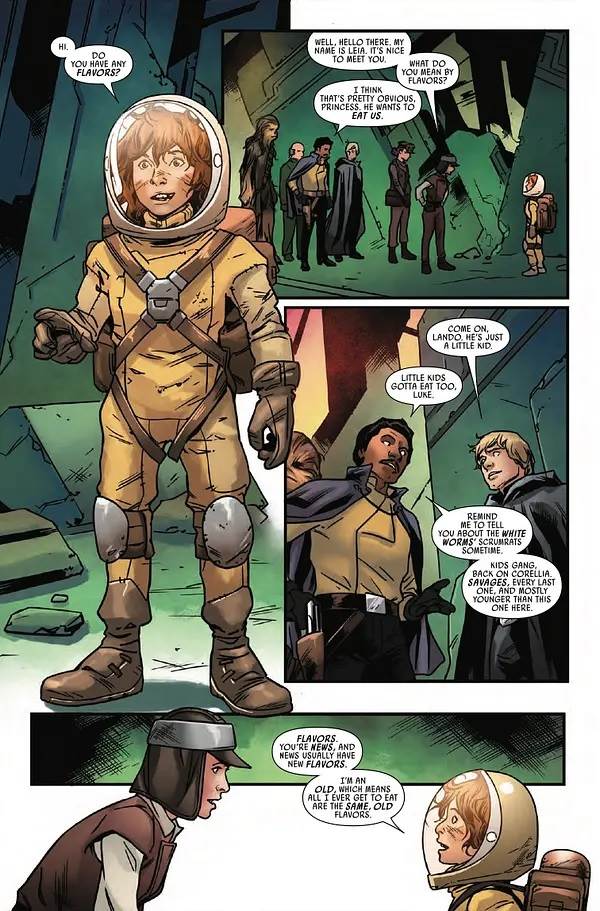 It’s an exciting new adventure for this group of characters, and I love seeing Lando Calrissian, Amilyn Holdo, and even Lobot tagging along on this particular excursion. I like the strategies that Soule is using to make up for the absence of Han Solo during this period when the smuggler-turned-rebel is frozen in carbonite– he’s populated the supporting cast with charming personalities and made sure those characters each have roles to play. Plus, this journey to No-Space feels fresh and new, with memorable elements of horror and suspense that we, as readers, haven’t experienced too often in this main Star Wars comic. The art by Genolet and colorist Rachelle Rosenberg feels appropriately eerie and kinetic (in the right parts) for this story, and the creative team has found a great pace to let the tale unfold, balancing mystery with action and humor. I’ve gotten to the point where I’ve gushed enough about Soule’s writing in these reviews, but it bears repeating how much he’s nailed the voices of all these familiar personas from A Galaxy Far, Far Away, and it’s a joy to watch them bounce off each other and react to a strange new place that none of them have visited before. I’m very intrigued by where this all might be headed, and the final-page revelation that more of the Nihil’s ways (and armor) may have survived than I previously suspected. So I’ll cross my fingers that this title doesn’t take any more months off, and I’ll look forward to reading more. 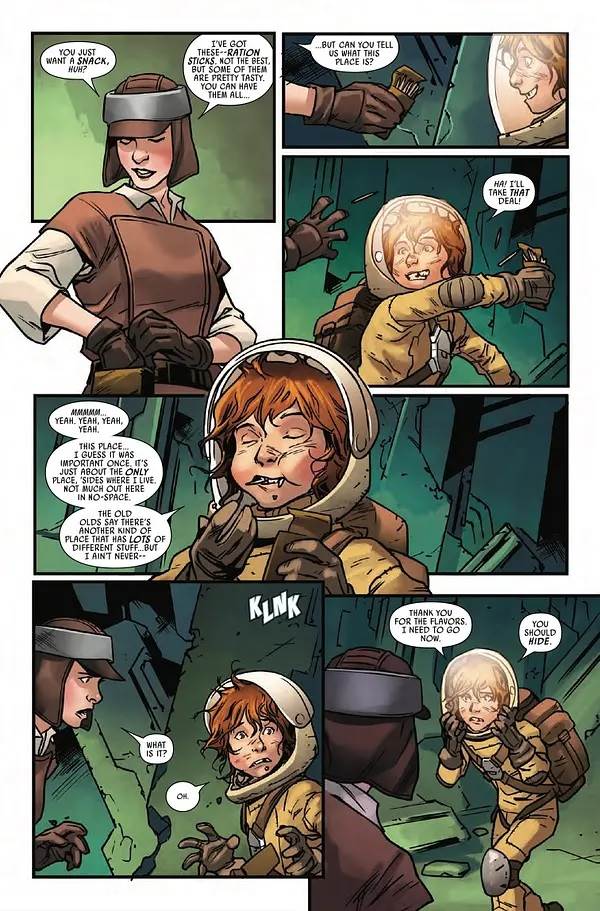 Star Wars #30 is available now wherever comic books are sold.