The Most Dangerous Game meets Clue meets Chef’s Table in Searchlight Pictures’ The Menu, which comes to Blu-Ray on January 17th. Directed by Mark Mylod, the Emmy-wining executive producer of HBO’s Succession, and written by two former editors of The Onion, Seth Reiss and Will Tracy, The Menu is as dark a comedy as they come, crossing into the psychological thriller genre. With an all-star cast headlined by Ralph Fiennes, Anya Taylor-Joy, Nicholas Hoult, Judith Light, and John Leguizamo, The Menu comes home to deliver thrills and chills to audiences who want to relive the surreal dinner, or who missed out on catching it on the big screen. 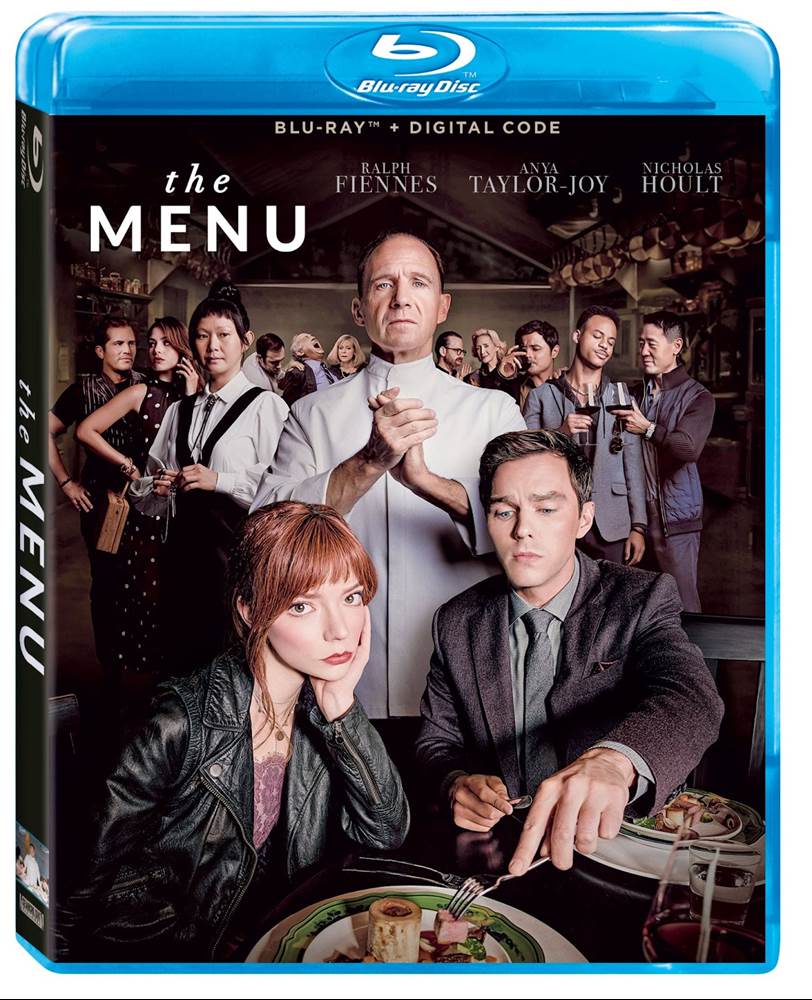 A foodie, a restaurant critic, a movie star, a wealthy couple, and a trio of tech bros have secured a spot at the final seating at Hawthorn, an expensive and exclusive private island restaurant run by renowned chef Julian Slowik (Ralph Fiennes). The menu is ever-changing and the chef delights in crafting a story as the courses progress. But on this fateful night, the guests soon discover that it’s not just the restaurant’s last meal, but theirs, too, with their own personal stories woven into the meal.

With lots of surprising twists, genre-bending writing, visionary directing, and incredible performances, The Menu is a winner all around. On Blu-Ray, the film is accompanied by a light but worthwhile assortment of bonus features. These include a comprehensive featurette about the making of the film and its visual style, as well as three deleted scenes.

The Menu is presented in its original 2.35:1 aspect ratio. The HD Blu-Ray presentation handles the color story well, with occasional bright pops of color in a handful of scenes, but mostly used as the dishes are served. Details are perfect as each meal is plated and delivered. If it weren’t for the disturbing components of the film, these shots would make you hungry.

The primary audio mix is a 5.1 DTS-HDMA track that does a fine job of placing you in the center of the action. While not a jump-scare kind of film, there are a few moments where an off-screen audio cue demands your attention from a rear speaker. Additional audio options include Spanish and French 5.1 Dolby Digital, and an English Audio Description 2.0 Dolby Digital mix.

The Menu comes home in a standard Blu-Ray case with no slipcover or disc art. The only included insert is a digital copy code redeemable through Movies Anywhere. The disc menu features animated artwork of Julian Slowik in the kitchen set to score from the film. There are no trailers.

The Menu was a winner in theaters and now you can find out why with the Blu-Ray/Digital release from Searchlight Pictures. While the lack of a commentary track is a shame, the included featurette is thorough with its coverage of everything from designing the food, sets, and costumes, to the themes of the film and challenges the actors faced making it.