“What happens between the first season and the second season is tremendous,” How I Met Your Father executive producer Pamela Fryman said during a TCA visit to the set in Hollywood. The hit Hulu comedy returns on Tuesday, January 24th, for a second season that doubles the episode order. “We make something in a vacuum and then we put it out in the world and we see how it's received. We take all of that with us into the second season… Everybody is more comfortable. It's funnier. All of those things translate into just a huge shift for us for Season 2. So as much as Season 1 was a complete joy, Season 2 has been off the charts. It's just been magic to be on this stage. And I think you see that translated in the episodes in Season 2.” There are a lot of pros to having a bigger season order. “The first season, we had 10 episodes; This time, we had 20,” explained co-showrunner, writer, and executive producer Elizabeth Berger. “That makes it very different in terms of how you approach it. I think Season 1, we felt like, oh, man, we have to really push this romantic mystery in every episode because we have such limited real estate. This season, we felt like this is awesome, we have so much room to play here. And we can spend a lot of episodes telling those really fun, you're young, and you're in New York and you're hanging with your best friend stories. And then we still have room to push our arcs forward in a way that feels exactly the way we want to do it. So, I think utilizing our real estate most effectively and telling both those kinds of stories and marrying them together was our primary goal when we stared down these 20 episodes at the beginning of the season.”

Speaking of the beginning of the season, diehard Hilary Duff fans will be pleased to know that she is given a reason to sing in the premiere episode. “We didn't clear the first song, so there was a couple of runners up, and this is like 30 minutes before we shot,” the “Sparks” singer revealed. “It was like, ‘Oh, is it going to be Kelly Clarkson's 'Since You've Been Gone'?’ ‘No, no.’ ‘Okay. Go work on that one.’ ‘Okay.’ ‘All right. Is it going to be Carrie Underwood 'Before He Cheats'?’ And I was just like, ‘You guys are giving me some people with some big, broad voices to try.’” Anxieties aside, Hilary Duff came to the set prepared with all of the possible song options and the rights were literally cleared while she was singing one of them. “I have to very much put myself out on the line and embarrass myself. And sometimes it works and sometimes it doesn't, which is that fear of being an actor and just being, like, I have to step up and I have to just try. I'm either going to fall or it's going to work and I'm going to make everybody laugh. And that fear is a really fun state to be in while we're shooting here, because it makes you feel alive.” 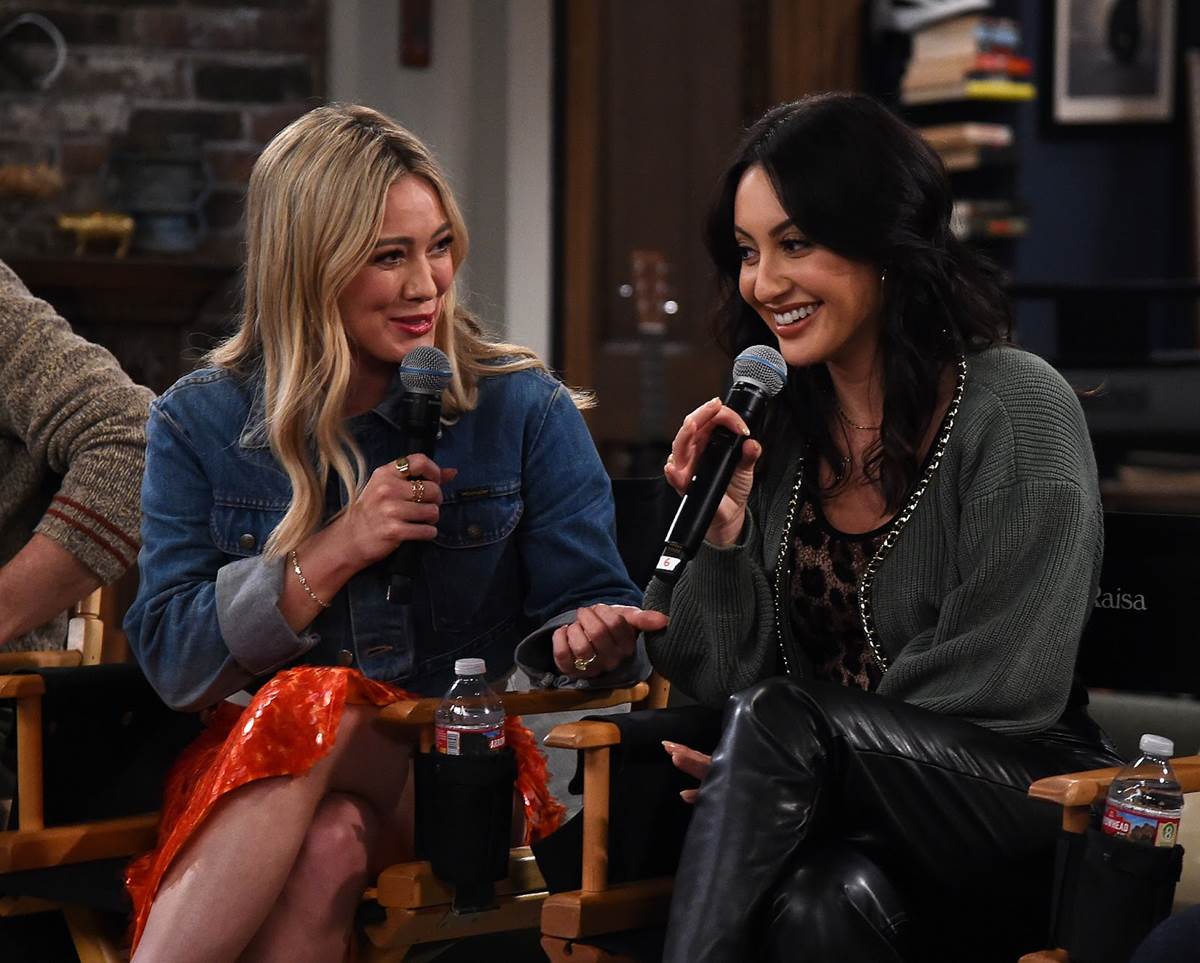 The narrative that drives How I Met Your Father is Sophie’s quest for love, one that gives birth to a child who is listening to this story from the future. But one of the most special elements of the show is the bond of sisterhood shared by Sophie and Valentina. “I really love that in our friendship, whether we have ups and downs or she's getting us into some trouble or, you know, even the dynamic we've had the last few episodes where we're really sharing our insights, we can keep it light,” Francia Raisa said of the dynamic between Valentina and Sophie. “We really have a sisterhood. I call [Hilary] my work wife, where we're really supporting each other and have each other's backs. And I think it's beautiful to show an audience. It's beautiful to show other friendships, especially as we're growing in today's world, trying to figure out what friendships and relationships looks like.”

Similarly, Tien Tran and Christopher Lowell have grown into a sibling-like dynamic off camera, which is fitting since they play brother and sister Ellen and Jesse. “He's my older brother in the show, but I look up to him in real life, so when we're acting together, I am just trying to soak up as much as possible and learn from him,” Tien shared of working with Chris. “I love that in this season, you see Ellen and Jesse lean on each other in different situations when it comes to love, life, and also their jobs. And they're just really, truly rooting for each other, and also, at times, annoying the hell out of each other, because that's what a true sibling relationship is like. So, it's been really, really exciting to get to be a part of a brother-sister relationship on TV with that handsome dude.” “She's everybody's favorite,” Christopher Lowell said of Tien Tran. The interview was held in the living room set of the apartment that Jesse shares with Sid, played by Suraj Sharma. “I remember [executive producer Adam Londy] hinting to us that we would get to have some more fun roommate [stuff] to do this season, and we have gotten that, and it's a blast. It's just so fun to work with [Suraj] and everybody else.” Chris also squashed any presumptions that Jesse and Sid are meant to be this series’ equivalent of Ted and Marshall. “I don't think there's ever a time where we're walking through the set being like, ‘All right, but we got to get that Ted flavor into it.’ It just feels so much like its own entity, which is crazy, because, literally, as we were walking out to come do this Q&A, there's like the design of this set from the original show back there, which is insane.”

“This is the exact same [floor plan], which is crazy,” Suraj Sharma pointed out. “But he's right. We didn't really ever have to compare. From the get, it was like, okay, this is its own thing. We're going to find its own flavor.” While the cast was told to be tight lipped about surprises in store for the season, Suraj did give a tease of what’s to come for Sid. “You will see a lot more of Sid's back story and all the crazy things that happen in his life and ups and downs. It will take you somewhere. It took me somewhere.” 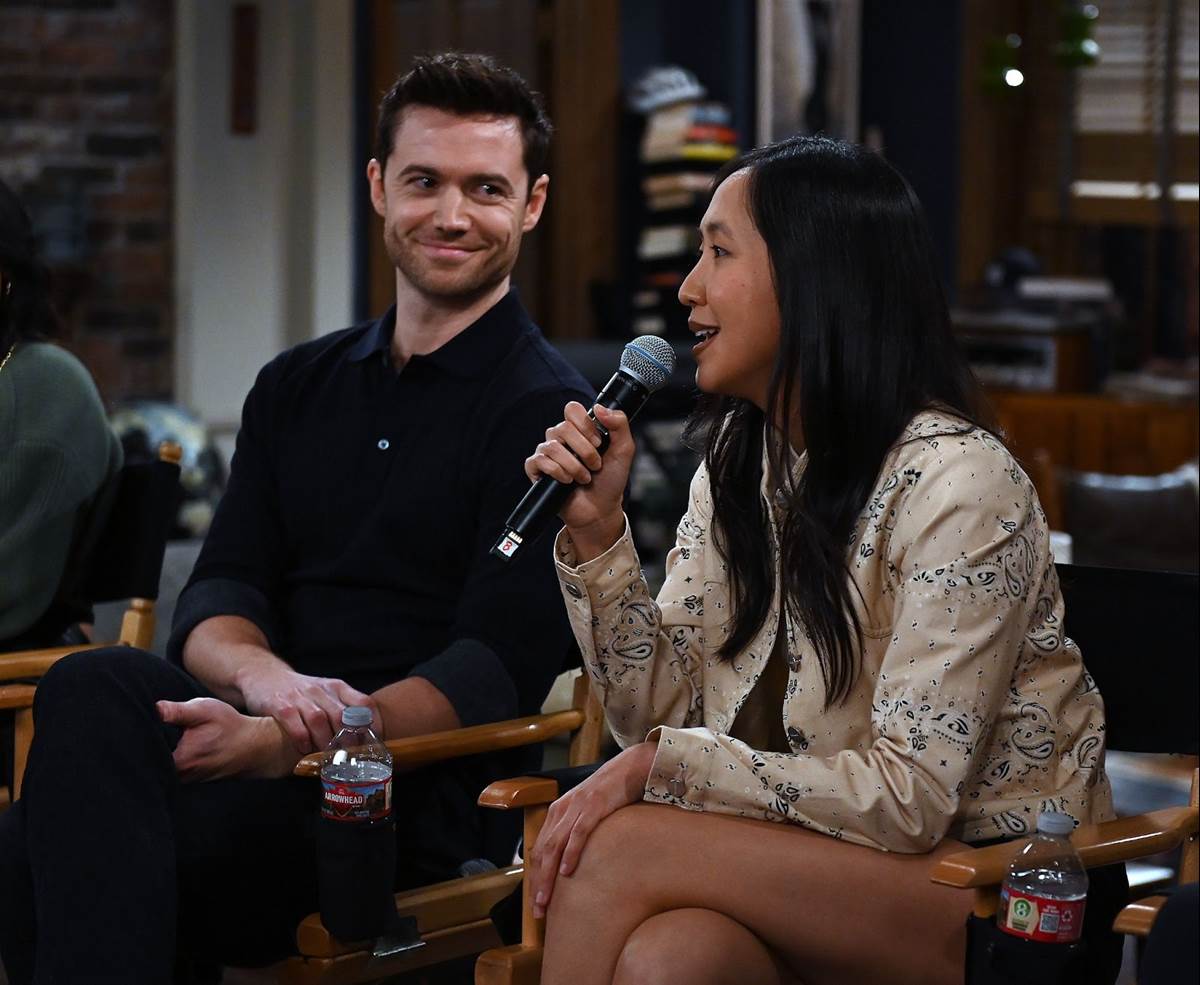 With a second season comes even more familiarity between the writers and actors. “I recently discovered that we've been lied to,” laughed Tom Ainsley about trying to get an early scoop on the next script for his character Charlie. “Quite often, I'll get what I think is the scoop, and I'll come in the next morning, and I'll tell everyone. And they all go, We haven't heard that.’ And I go, ‘Well, they can't have told me. There's no way they would have told me and only me.’ And I have a feeling that they're trying to find where the leak is. Guys, it was me all along. I was the leak.”

Thankfully, there haven’t been any leaks, but fans will soon get to dive back into the fun of How I Met Your Mother. As fun as the show is to watch, the cast and creative team have a great time making it, too. “She could not be a more dream partner,” co-showrunner, writer, and executive producer Isaac Aptaker said of doing this project with Pamela Fryman, who worked on the original How I Met Your Mother. “Multicam was a totally new format for Elizabeth and I. We've done screenplays and drama and single-cam comedy, but we were walking into something we had never tried and with this big, high stakes show. So, we were like, if we are going into a totally new format, we need a partner who's as experienced and collaborative and calming and all of the adjectives as Pam is. We throw these scripts at her that are tremendously ambitious because we don't understand the limits of the format, really, for better or worse, sometimes for worse. But she finds ways to bring it all to life.And when it's truly impossible, she gives a suggestion that always makes it better.”