Disney Research Hub’s “PaintCopter” and How it Could be Used

Disney’s Research Hub is known for creating some amazing things, including the robotic acrobat that took the internet by storm in the spring. Now, it looks like they’ve created an autonomous unmanned aerial vehicle (UAV) dedicated to spray painting 3D surfaces, aptly titled the PaintCopter.

Disney Research offers the following description of the unique and interesting new technology:

“This paper describes a system for autonomous spray painting using a UAV, suitable for industrial applications. The work is motivated by the potential for such a system to achieve accurate and fast painting results. The PaintCopter is a quadrotor that has been custom fitted with an arm plus a spray gun on a pan-tilt mechanism. To enable long deployment times for industrial painting tasks, power and paint are delivered by lines from an external unit. The ability to paint planar surfaces such as walls in single color is a basic requirement for a spray painting system. But this work addresses more sophisticated operation that subsumes the basic task, including painting on 3D structure, and painting of a desired texture appearance. System operation consists of (a) an offline component to capture a 3D model of the target surface, (b) an offline component to design the painted surface appearance, and generate the associated robotic painting commands, (c) a live system that carries out the spray painting. Experimental results demonstrate autonomous spray painting by the UAV, doing area fill and versatile line painting on a 3D surface.” 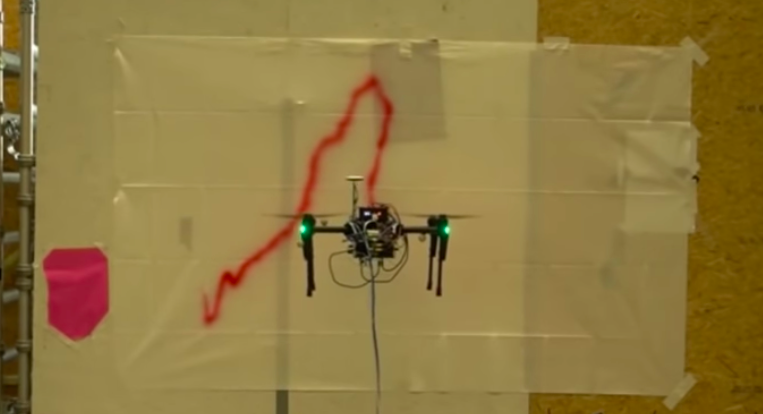 Potential functions for this new technology could range from simple touchups on on-stage areas of the parks to total design changes. This might make things a bit easier the next time Walt Disney World decides to transform Cinderella Castle into a birthday cake.

For more information on the PaintCopter and other projects, visit the official Disney Research website.