Welcome to Disney Extinct Attractions. My name is Cole Geryak, and I’ll be your guide on today’s journey to the future and new Horizons. 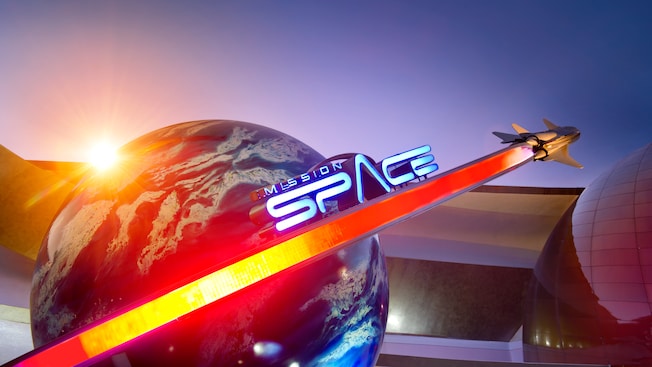 A few months ago, Disney announced that Mission: SPACE in Epcot would be undergoing a major refurbishment this summer. While details about what this refurbishment entails are scarce, the fact that Disney is closing the attraction down for two months in the middle of the summer means that Disney has acknowledged that Mission: SPACE needs some major love and care and are now able to do something about it. Ever since it opened, the attraction has been one of the most maligned in the Epcot canon. However, its predecessor was anything but that, being perhaps the most beloved extinct attraction of all time.

Opening on October 1st, 1983 (Epcot’s first anniversary), Horizons was the quintessential Epcot attraction. It took every part of the park and put it into one amazing attraction that is still remembered fondly today.

But before I say too much, let’s take a step back and look at one of the major inspirations for Horizons. 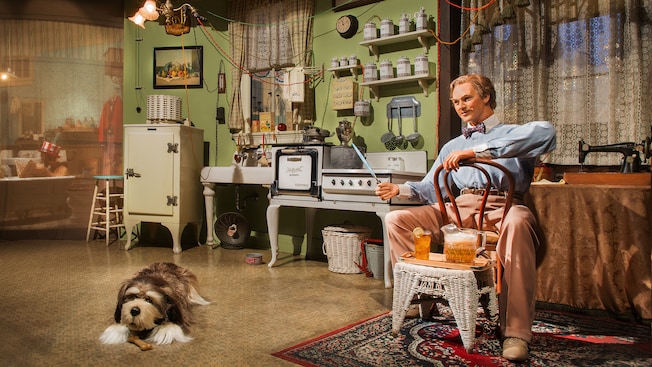 Walt Disney’s Carousel of Progress is the longest-running stage show of all-time. Sure, all of the actors are animatronics, but it’s still extremely impressive that this show has been running since 1964. It has moved from New York to Anaheim and then back across the country to Orlando, but no amount of moving can make it lose its charm.

Originally sponsored by General Electric, this attraction was one of Walt’s favorites and is one of the few attractions to bear his name today. Its simple story about seeing a day in the life of an American family every twenty years is timeless and endearing to hearts around the world.

General Electric was so pleased with how much people loved Carousel of Progress that they actually approached Disney with an idea for an attraction. The idea, spearheaded by then-GE CEO Reginald Jones (above), was for an attraction that focused on Thomas Edison’s invention of electricity and how it lead to change. Disney took that initial idea and ran with it, expanding the idea to have a global message and talk about all innovation, especially when it came to the future. 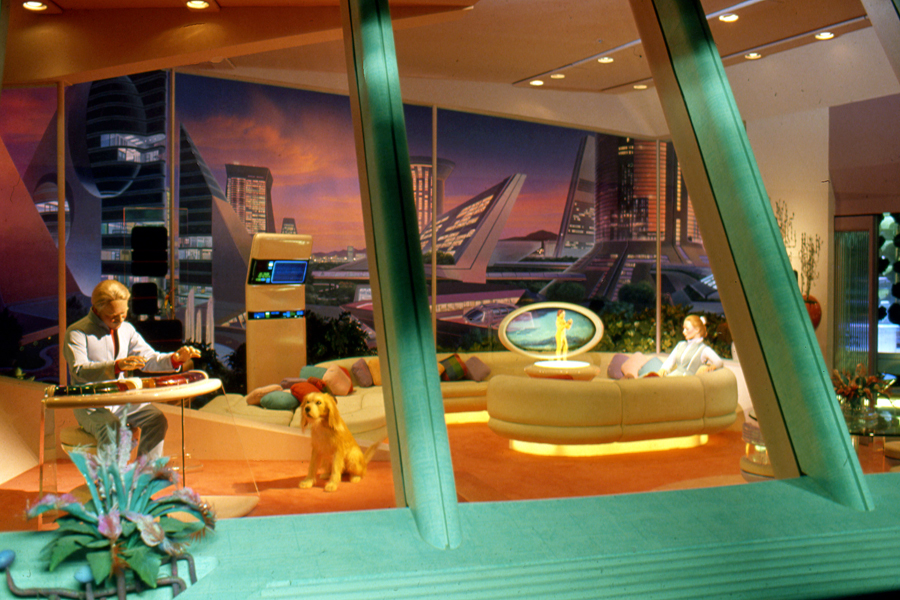 In many ways, Horizons was a direct sequel to the Carousel of Progress. Whereas the Carousel focused primarily on the past, Horizons took place almost entirely in the future and looked at what kind of innovation we could expect in the coming years.

But before I dive too much deeper into it, you can find a video of the attraction below. I highly recommend watching it because this attraction truly was one of a kind and seeing it will help with context for the rest of the article if you never got the chance to experience it. (It is a little hard to hear the dialogue, however, so I recommend listening with headphones.)

Before writing this article, I had heard amazing things about this attraction and all those things only scratched the surface of how truly great this attraction was. I can’t quite put my finger on what I loved so much, though. It’s just one of those attractions where you need to experience it again and again to really understand the importance of the attraction.

First and foremost, the scope of the attraction was amazing. With over a thousand feet of track and an Omnimover system, Horizons was very reminiscent of other classic attractions like Spaceship Earth and the Haunted Mansion. But what set Horizons apart from both of those was how it blended together multiple ride types into one cohesive attraction. 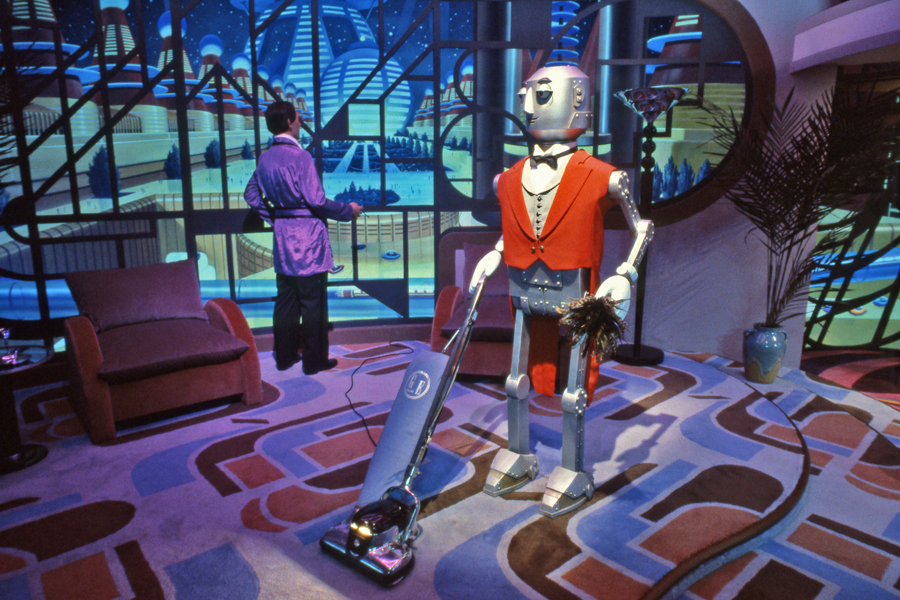 To start, Horizons had some very impressive Audio-Animatronics, showcasing Disney’s true proficiency at creating the technology. These animatronics created the crux of the story in which we saw a normal 21st-century family (this was in the 1980s) going about its daily business. In this way, it functioned as a sequel to Carousel of Progress because you saw the family multiple times throughout the attraction, and they served as the main group through which the action of the attraction occurred.

Being able to physically move through the story of the family was such a refreshing take on the Carousel of Progress narrative. Instead of doing more of the same, we got a lot of new things with a dash of similarity to keep guests engrossed. (Also, if you listen closely near the beginning, you just might hear the song “There’s a Great Big Beautiful Tomorrow.”) 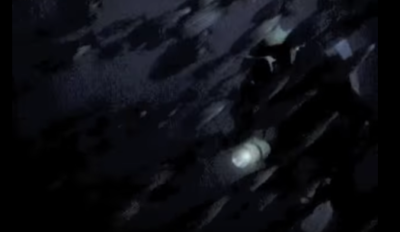 It’s hard to see in this picture, but there were also giant screens on which part of the action of the story took place. (You can see it much clearer in the video.) The coolest part of these screens was how seamlessly they flowed with each other. Because it was an Omnimover, these screens all needed to be strategically placed so that what was happening on one screen would not distract what was happening 50 feet away in this continuously moving attraction.

Maybe it was great editing by the maker of the video I watched, but I tend to think that the Imagineers just really nailed it on this one. Every single transition on the screens is fantastic and brings a lot of great information to the story of the attraction, as well. My favorite one had to be when guests were placed inside of a computer chip for a few seconds because I imagine that that must have really blown the pants off of most guests in 1983, when computers were still relatively new. 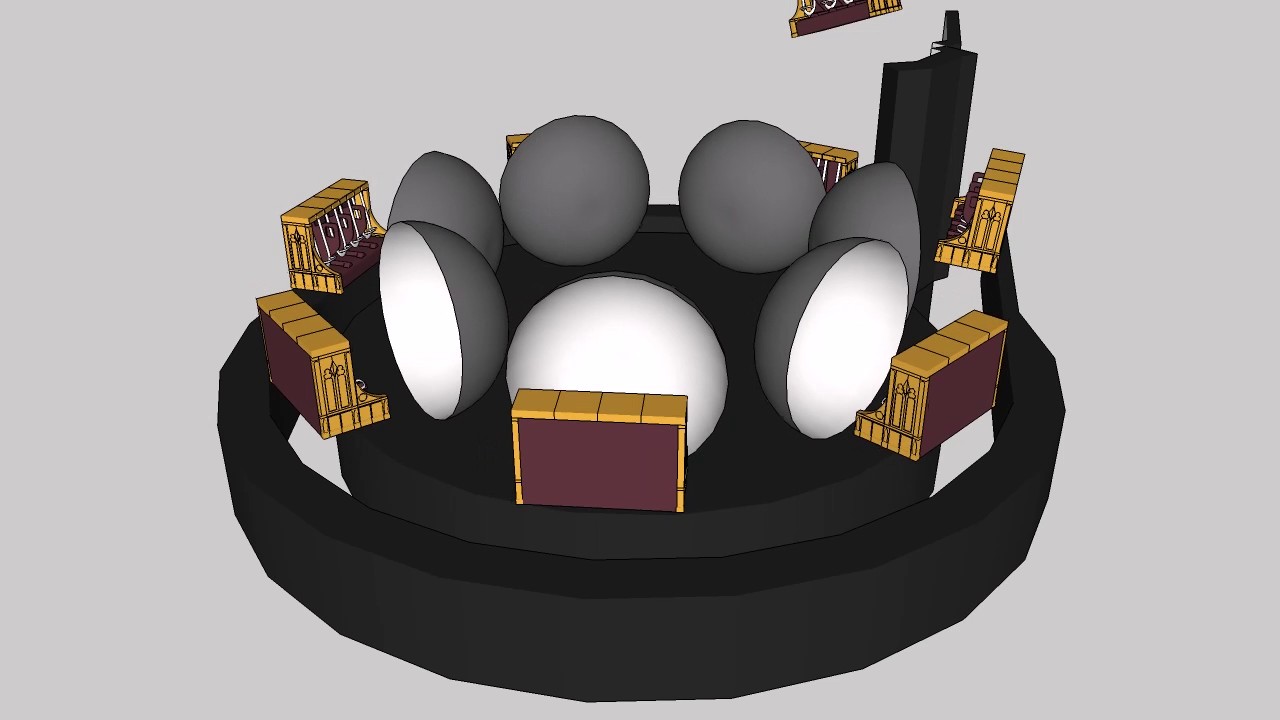 But the coolest technology used in Horizons has actually been brought back today to much acclaim in Universal Studios’ Harry Potter and the Forbidden Journey, so if you’ve ridden that attraction, you’ll have a bit of an idea of what I am about to talk about.

Towards the end of the attraction, guests got to view a tourist video of multiple locations that they could “visit” once they exited Horizons. Though it sounds kind of cheesy, the videos were actually incredible, a sort of flight simulator over the landscape that was very evocative of Soarin’.

However, the coolest part was that the screen that these videos moved with groups of about three Omnimovers for 30 seconds, really aiding in that feeling of motion. Then, the screen would peel away and guests would go on their merry way. It is a little confusing, but if you go to the end of the video, it should make a little more sense. That’s not all though, because you and the guests nearby, who would share the screen with you, would all get to vote for which location you wanted to see by pressing a button in the vehicle. The fact that not only would this screen move in front of you, but that it would actually play whichever video you chose is mind-boggling to me.

Nowadays, something like that seems pretty commonplace, but this was 1983, when randomization in rides was relatively unheard of. The design behind all parts of the attraction is astounding, but the end really takes the cake for me as the coolest part of all. Speaking of those tourist videos, they actually made their way to Tokyo Disneyland as a part of Star Tours. As guests exit the attraction, there is a small kiosk showing videos of other excursions, three of which are the exact videos that would play at the end of Horizons. Very few extinct attractions from the US have mementos overseas, so it’s a testament to the legacy of Horizons that it was part of the magic in Japan. 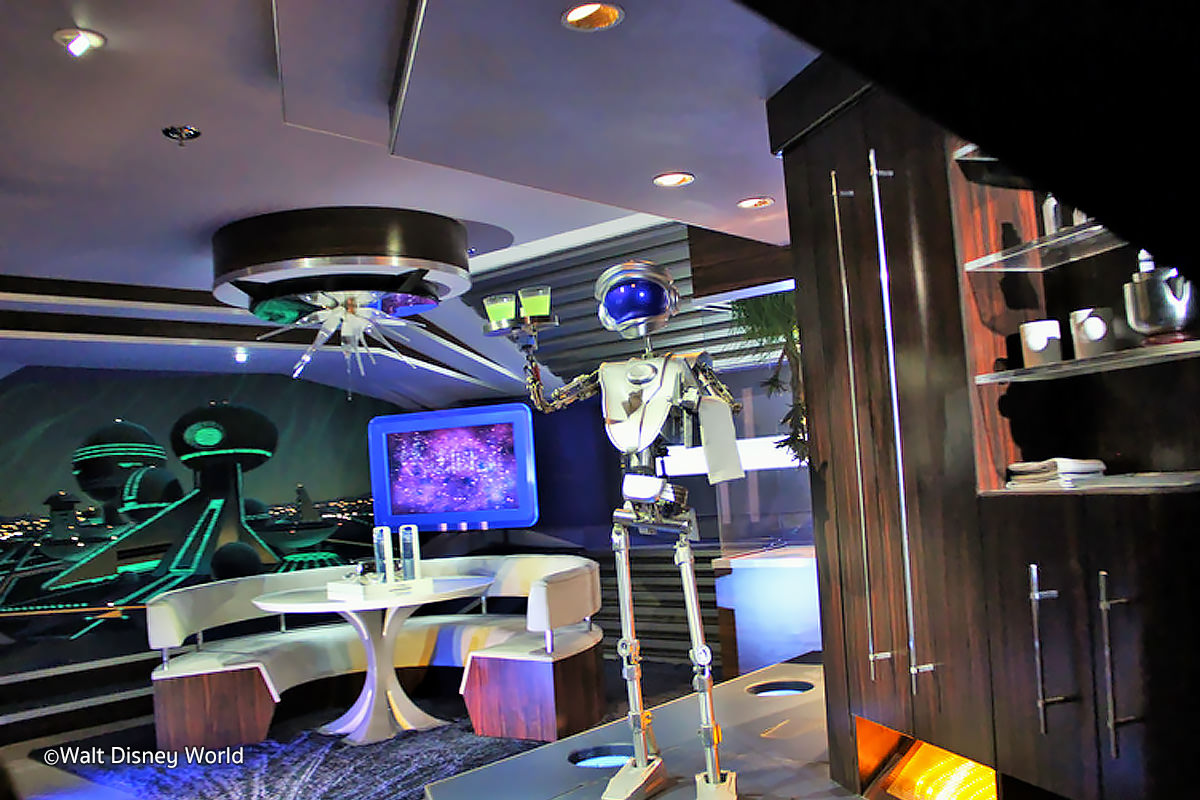 But Japan wasn’t allowed to have all the fun as Walt Disney World’s Space Mountain also wanted to memorialize Horizons. As guests exit Space Mountain, there is an entire post show that is chockfull of references to Horizons. There’s a bag saying Mesa Verde (one of the tourist video locations), an underwater scene that looks a lot like the one in Horizons, and even its very own robot butler. 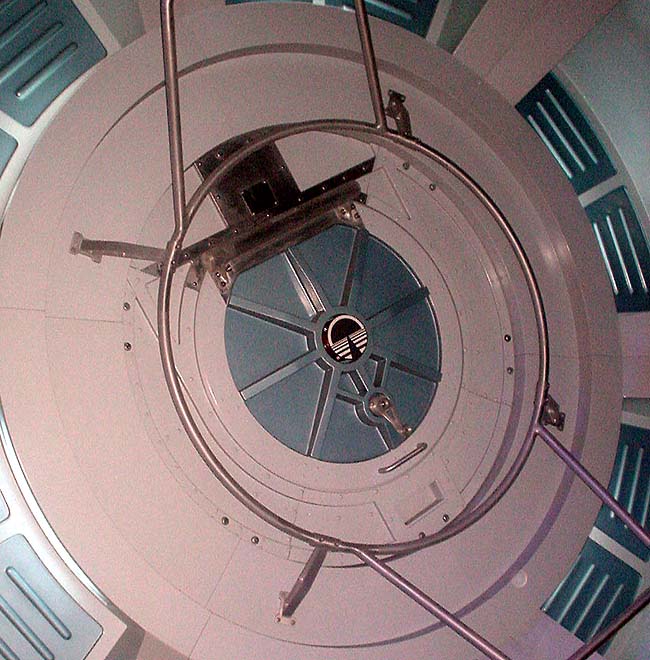 But my favorite homage to Horizons has to be in the attraction’s successor itself, Mission: SPACE. In the queue, there is a giant gravity wheel and right at the center of it is the Horizons logo. I love when attractions make reference to their predecessors because it’s such a nice gesture to show respect for what came before.

Well, now that the wheel brought us full circle, let’s take a couple steps back and look to what led to the wheel even needing to exist in the first place. 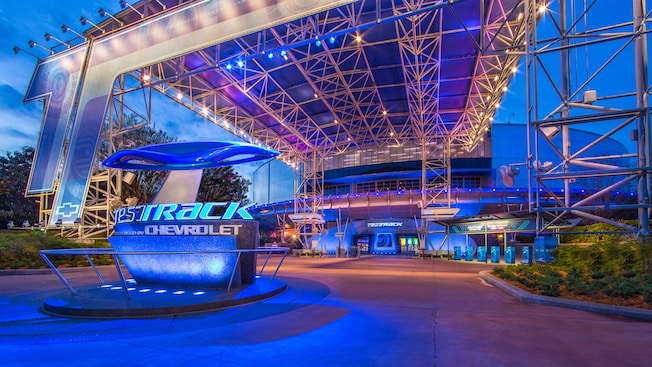 In the middle of the 1990s, Disney as a company was revitalized, so massive changes started happening to the theme parks and one that was affected heavily was Epcot. One of the first attractions to close in Epcot was Horizons, seemingly ending its run in December 1994, primarily due to General Electric deciding to drop its sponsorship of the attraction. But fans were lucky because other plans were in store for Epcot. Horizons reopened in December of 1995 to help with guest flow due to the closure of Universe of Energy and World of Motion to become Ellen’s Energy Adventure and Test Track respectively. Both of those attractions are on the same side as Horizons, so Epcot really needed Horizons open or literally one whole side of Future World would have been closed for over a year.

But, eventually, both of the attractions reopened, and Horizons was now the odd one out as an older attraction with no sponsor, leading to the attraction’s unfortunate official end on January 9th, 1999. Ultimately, I believe that the lack of the sponsor lead to the attraction’s closure, especially since the Disney company felt a lot of financial pain in the late 1990s, so costs needed to be cut wherever they could.

Horizons truly represented all of Epcot, between its focuses on technology, the future, space, transportation, communication, and much more. The fact that the park got rid of the attraction is such a shame, but time does go on and changes need to made. Who knows if we’ll ever see an attraction like it again, but I sure hope so because Horizons was truly one of the greatest attractions ever made.

I hope you guys enjoyed this post because I know that I fell in love with Horizons just from writing about it. I now see why it has such a huge following and am proud to count myself amongst that number.