If there are any theme park enthusiasts who dislike holiday celebrations, life must be tough this time of year. 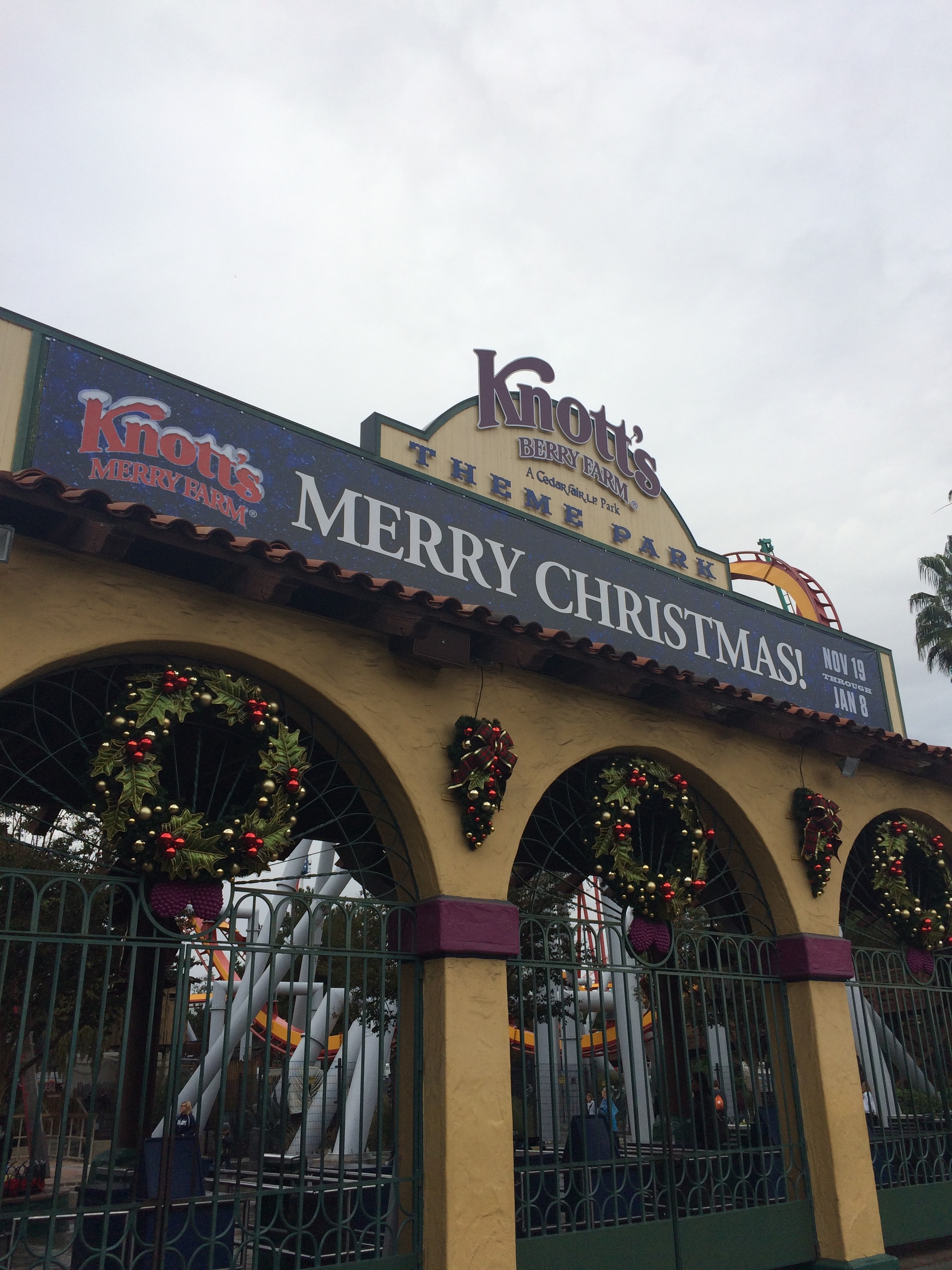 All of the usual offerings of Knott’s Berry Farm, such as the world-class roller coasters including the newly refurbished wooden coaster, GhostRider, and family attractions including the new Voyage to the Iron Reef, and renovated classics Timber Mountain Log Ride and Calico Mine Train, are supplemented by Merry Farm’s Christmas-themed shows, music, decorations, food, and activities. Whether you’re a local or you’re going to be visiting southern California for a few days, you owe it to yourself to visit Knott’s Berry Farm, and there’s no better time than during “Merry Farm”. There’s the Christmas Crafts Village in Ghost Town (which was just renovated to celebrate its 75th anniversary), Christmas in Calico at Calico Town Hall and Ghost Town, the Calico Tree Lighting Ceremony in Calico Park, and Santa’s Christmas Cabin in Wilderness Dance Hall. “A PEANUTS Guide to Christmas” at Camp Snoopy Theatre – A new show to help you “survive the holidays”.

“A Christmas Carol” and “The Gift of the Magi” at the historic Bird Cage Theatre – Knott’s melodrama company performs the classic stories that remind us of the spirit of the season. On select nights, you can enjoy the musical and comedy stylings of Krazy Kirk and the Hillbillies at this location.
“Calico Saloon Christmas Show” at Calico Saloon

“It’s the Merriest Christmas Show Ever, Charlie Brown” at Calico Mine Stage – This is a new show at a new venue, with Charlie Brown as the leading character. 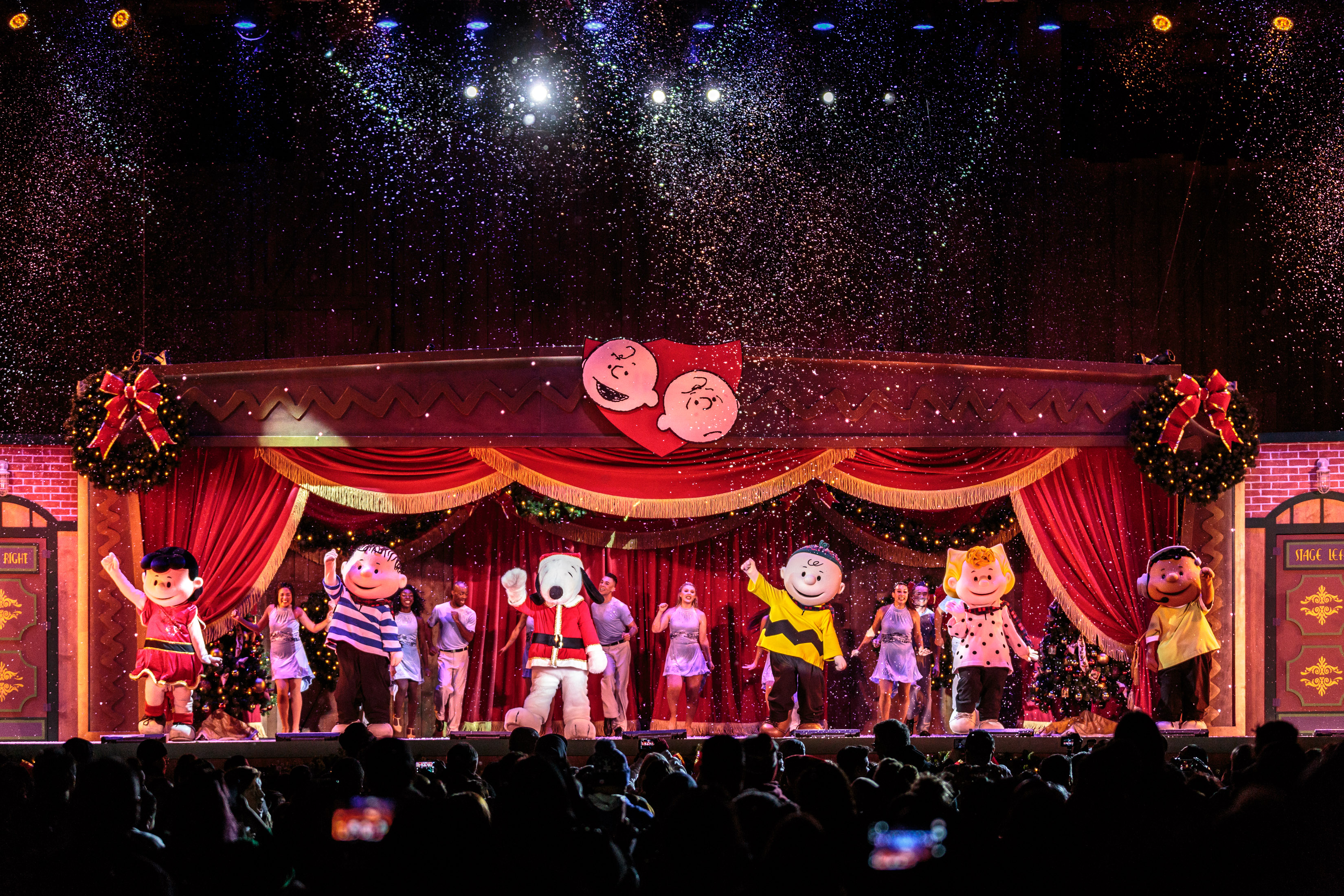 “Merry Christmas, Snoopy! Ice Show” at Charles M. Schulz Theatre – It’s good to get to the Charle’s M. Schulz Theatre at least thirty minutes ahead of the start time for this returning show, as it is very popular, and for good reason. The cast skillfully navigates the stage, performing on ice, as they bring on the holiday cheer, with Snoopy leading the way. If you like watching ice or figure skating, you won’t want to miss this. Judging from the reaction of the crowd, the audience thought the show was well worth the wait. Knott’s wouldn’t be Knott’s without must-have food and drink, so when you visit Santa’s Christmas Cabin at the Wilderness Dance Hall, you can buy freshly-baked cookies, pastries, chocolate-dipped cheesecake on a stick, seasonal craft beers, hot chocolate with marshmallows and hot spiced holiday wine. Also available in Ghost Town are poured-to-order maple lollipops.

Merry Farm is running through January 8. When you plan to go, consider a deal that Knott’s is calling the perfect stocking stuffer: a 2017 “Season Pass” that includes one free admission in 2016, unlimited visits in 2017 with no blackout dates (364 days), discounts on select food and merchandise, and access to exciting year-round seasonal events, starting at $90, and that can be paid in six payments of $15 (plus applicable taxes and fees).

If you’d prefer a one-day ticket, I highly recommend buying at least three days ahead of time from the official Knott’s website as you can save a substantial amount of money.