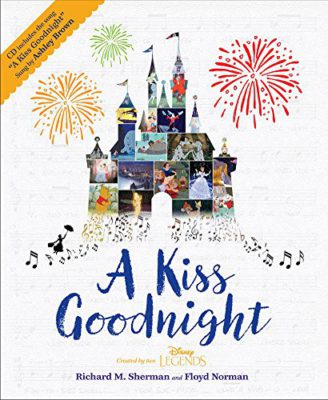 Debuting at the D23 Expo, A Kiss Goodnight is a special book co-created by Disney Legends Richard M. Sherman and Floyd Norman. I like to think of it as a bedtime story for adult Disney fans, which comes with a CD of the title song, written by Sherman for Disneyland’s Diamond Celebration. The song made its debut at the Legends ceremony at the 2015 D23 Expo, which makes this book’s debut all the more fitting.

Written by Richard M. Sherman and Brittany Rubiano, the book tells the story of Walt Disney as a dreamer. It begins with young Walt in Marceline being inspired by a free fireworks show and follows the persistent artist through to the creation of Disneyland. Bookended by fireworks on either end, it’s a touching tribute to the Disney Parks tradition, which Walt described as “A kiss goodnight.”

The illustrations are by Floyd Norman and his wife, Adrienne Brown Norman. A unique style choice is that most of the pages are in black & white, unless fireworks are included in the artwork, in which case the pages become full color. Fans who know their Disney history will find Walt’s story brought to life, including a drawing of him as a child dressed like Lincoln, Walt’s drawings on the side of a WWI ambulance, Alice Comedies, Oswald, early Mickey, and the Griffith’s Park carousel. There are tons of details that fans are sure to appreciate.

This hardcover book comes with a CD, the debut release of Ashley Brown’s recording of “A Kiss Goodnight.” The song was previously heard at the end of the 60th Anniversary fireworks show, “Disneyland Forever,” and many fans were upset that it was not released in conjunction with the celebration. Disney Press has made it worth the wait by pairing the song with this beautiful book, and the final pages feature the full lyrics.

The cover advertises the Disney Legend status of the book’s creators and both give lengthy introductions. In Richard Sherman’s, he shares an anecdote about a day at Disneyland with his wife that ended with a run-in with the boss, who confessed that he tears up every time he sees Tinker Bell fly during the fireworks. In Floyd Normans, he discusses a wing of the old Animation Building that he would often peek his head in to see what was being created for the parks. These introductions prove that nobody was more qualified to make this book than Sherman and Norman.

It’s not often that I recommend picture books to adults, but A Kiss Goodnight was truly created for the adult Disney fan. It’s still very appropriate if you want to read it to your kids and if they’ve ever seen a Disney fireworks show, they’re sure to enjoy it. But it will tug at the heartstrings of any diehard Disney fans and is sure to be a treasured addition to your Disney book library.

A Kiss Goodnight will make its debut exclusively at the D23 Expo July 14th-16th and will have a wide release later this summer on August 22nd.