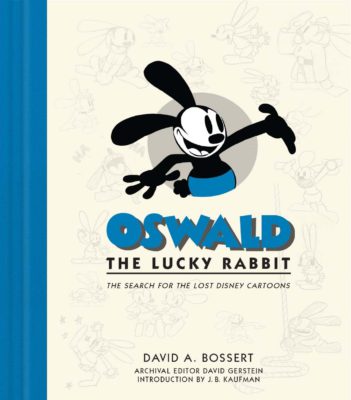 Assuming you’re not a brand spankin’ new Disney fan, you probably know the story of how Walt Disney lost his animated character Oswald the Lucky Rabbit and how the company reacquired him in 2006. But what you probably don’t know is that Universal didn’t have copies of most of the 26 shorts produced by Walt Disney, leading to a global search for these treasures of animation history. The story is now chronicled for you by Dave Bossert, the man who lead the search for these shorts, in his new book Oswald the Lucky Rabbit: The Search for the Lost Disney Cartoons.

Broken up into five sections, the first recounts the origins of the character, a segue for Disney between the Alice Comedies and the Mickey Mouse series. It chronicles how Charles Mintz became involved as distributor, the drama that ensued during production, and the heartbreaking moment when Walt Disney discovered that his character and most of his animation staff had been yanked out from under him. It also gives Ub Iwerks the credit he deserves for creating Oswald and serving as an animator on most of these shorts.

The second section covers the humorous story about the trade Disney made in 2006, giving NBC an ESPN sportscaster named Al Michaels in exchange for the rights to Walt Disney’s version of Oswald (the character evolved post-Walt and Universal retains that version). Michaels has his own version of the story, which is also highlighted here.

For readers who already know their Oswald history, the third and fourth sections become the highlight of the book. These cover the exploration of the materials that were readily available from these shorts and the search for any that may be out there in the hands of archives around the world as well as private collectors. In 2007, a collection of shorts that had been found were released through the Walt Disney Treasures series, but more shorts have been discovered since then, and in some cases more complete elements of those same shorts are now in Disney’s possession.

As a film nerd, I delighted in reading about the restoration process on the Oswald shorts as well as the challenges Disney went through to find them or buy them back. You can’t help but feel Bossert’s excitement when following each lead around the globe and at the back of the book, he empowers you with the ability to help him find the handful of shorts that have yet to be found, as well as some lost elements from a few incomplete shorts now back home at Disney.

The fifth and final section gives a breakdown of each of the 26 shorts. If the shorts have been found, it includes screen stills from the shorts, as well as scans of any art elements that are in Disney’s Animation Research Library or the Walt Disney Archives. In a few cases, the full pre-production script is provided. Bossert reveals any elements that may be missing and helps fill in the gaps of what elements they’re still looking for.

Reading Oswald the Lucky Rabbit: The Search for the Lost Cartoons really opened my eyes to not only the worldwide success of Oswald, but also the longevity of the character. I had no idea that his career lasted for so long without Walt, often competing at cinemas with Mickey Mouse, and his original shorts were even re-released with sound by Universal in the wake of Mickey’s success. This is required reading for any Disney History buffs or any fans of classic cartoon shorts.

Fans of classic Disney shorts can help Dave Bossert in his quest to find and restore lost shorts by contributing to his Patreon project. They already have leads on another lost Oswald short and are currently working to restore a lost minute of footage from the Alice Comedies.