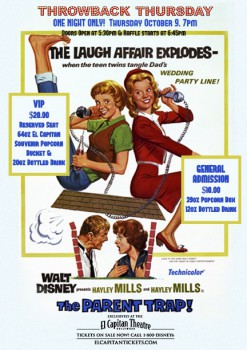 The next edition of The El Capitan Throwback Friday will be The Parent Trap on October 9.

THE PARENT TRAP was originally released on June 19, 1961. This Walt Disney film which stars Hayley Mills, Maureen O’Hara and Brian Keith is a story about teenage twins on a quest to reunite their divorced parents. The screenplay by the film’s director David Swift was based upon the book LOTTIE AND LISA (Das Doppelte Lottchen) by Erich Kastner.

Identical twins Susan Evers and Sharon McKendrick (both played by Hayley Mills) meet at summer camp, unaware that they are sisters. Their identical appearance initially creates rivalry, and they continuously pull pranks on each other, which ultimately leads to the camp dance being crashed by their mischief. As punishment, they must live together in an isolated cabin for the remainder of their time at summer camp. After both admit they come from broken homes, they soon realize they are twin sisters and that their parents, Mitch (Brian Keith) and Maggie (Maureen O’Hara), divorced shortly after their birth, with each parent having custody of one of them. The twins, each eager to meet the parent she never knew, switch places. Learning the news that their father is planning to marry a gold digger, the twins scheme to sabotage their father’s marriage plans and get the former spouses back together.