Jessie Appearing in a Crossover Episode of Ultimate Spider-Man 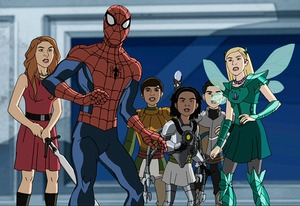 TV Guide is reporting that an animated version of Jessie (voiced by Debby Ryan) will be appearing in a special crossover episode of Ultimate Spider-Man: Web Warriors. The special crossover will air on Friday, Oct. 10 at 9:30/8:30c as part of Disney Channel’s “Monstober” programming event. The episode will also air on Sunday, Oct. 19 at 8/7c on Disney XD.

In the episode “Halloween Night at the Museum,” Jessie comes in possession of a medieval sword that Morgan Le Fey is after. Jessie and Spider-Man then team up to fight Le Fey. Debby Ryan’s Jessie co-stars Peyton List, Karan Brar, Cameron Boyce and Skai Jacksonalso voice animated versions of their characters in the special episode.

Other Monstober highlights include four episodes of the new mystery adventure special Evermoor, which will air on two consecutive Fridays (Oct. 17 and Oct. 24) at 9/8c and the one-hour Phineas and Ferb special “Night of the Living Pharmacists,” inspired by Night of the Living Dead, which premieres Saturday, Oct. 4 at 8/7c. Simon Pegg, Nick Frost, George Romero, Noah Wyle and Bella Thorne guest star.