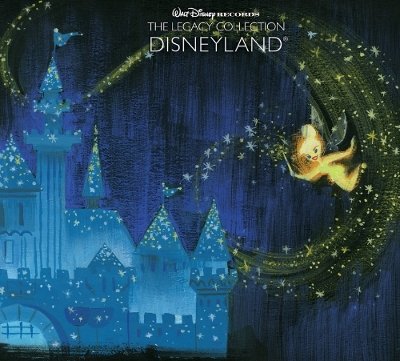 The eighth release from The Legacy Collection celebrates the 60th anniversary of Disneyland Resort with a 3-disc set, which features classic music from attractions.  The set was produced and compiled by Grammy®-winning producer Randy Thornton.

This release coincides with the Diamond Celebration and will be available exclusively at Disneyland Resort beginning May 20th, with a wide release set for August 21.

The Legacy Collection Disneyland explores the rich past behind songs and attractions past and present. Beginning with the recordings from the opening day of Disneyland in 1955, the collection guides the listener down Main Street U.S.A., through the greatest attractions, shows and lands that exist today and those that are a happy memory.

The liner notes provide extensive historical background by writer Stacia Martin, a 37-year veteran of the Walt Disney Company and Disney Historian, who oversees special projects for many divisions of the company including Walt Disney World, Walt Disney Imagineering and Walt Disney Records.

Walt Disney Records The Legacy Collection Disneyland 3-disc set will be available exclusively at Disneyland Resort beginning May 20 and on August 21 at Disney Music Emporium:disneymusicemporium.com.  For more information on Disney Music Emporium, please visit, DisneyMusicEmporium.com become a fan at Facebook.com/disneymusicemporium or follow us at Twitter.com/DisneyMusicEmp.