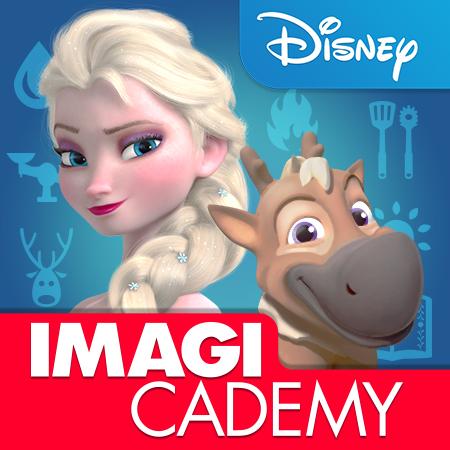 Today, Disney Publishing Worldwide, the world’s largest publisher of children’s books and apps, announced Frozen: Early Science, a series of apps grounded in early science principles, featuring favorite characters and stories from the award-winning animated film, Frozen. The new series of apps is the latest offering from Disney Imagicademy, the company’s technology-driven learning initiative for families with children 3 to 8.

“We are excited to introduce early learners to another educational concept in a fun and uniquely Disney way,” said Jeff Sellinger, senior vice president, Disney Learning. “The Frozen: Early Science apps bring together Frozen’s hugely popular story and characters with an early sciences curriculum developed in conjunction with education experts and academics. The goal of Disney Imagicademy has always been to inspire children’s natural curiosity, and what better subject to do that with than science – where discovery and experimentation is at the heart of learning.”

The Frozen: Early Science apps are designed to reward observation, experimentation and deduction, skills that are the building blocks of the scientific process. Each app features environments, themes and beloved characters from the Academy Award-winning film, including Elsa, Anna, Olaf, Kristoff, Sven and more.

“Disney Imagicademy is such a wonderful initiative and we are thrilled that Frozen characters are featured in the program,” said Peter Del Vecho, producer, Frozen. “The focus on science is a perfect fit with each activity being an extension of the film’s storyline. It feels good to know that fans around the world will be able to practice early science skills with their favorite Frozen friends in a new, authentic and educational experience.”

“All children have the capacity and propensity to explore, observe and discover the world around them,” adds Dr. Stacy Sinclair, adjunct professor at USC’s Rossier School of Education, associate professor at Loyola Marymount, and one of Disney’s collaborators in developing Disney Imagicademy Frozen: Early Science. “These are the basic aspects of understanding early science skills, and as an educator who develops science curriculum for children in kindergarten through twelfth grade, I believe that tools like Frozen: Early Science can help children in their early years develop a lifelong love of science.”

Phases of Matter and Life Science

All Frozen: Early Science apps connect to the Disney Imagicademy Parents app, giving parents the ability to see what their children are discovering, making and building in the apps. The Parents app was created with the belief that parents and caring adults are an integral part of every child’s learning process. It provides parents a window into their child’s accomplishments digitally and remotely, as well as ideas to extend the principles of observation, experimentation and deduction into the everyday world.