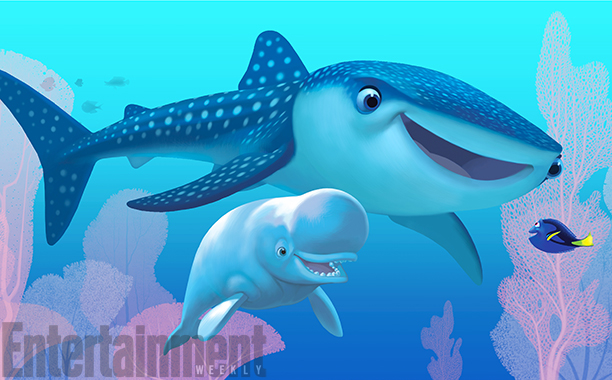 “My character isn’t great at his own sonar capability, and Destiny has trouble swimming straight,” Burrell explained to the magazine.

“We totally get on each other’s nerves,” Olson reveals. “I like to think I’m a shark, but Bailey calls me a whale, and I make fun of his head, because it’s gigantic.”

Dory meets these new characters at a marine rehabilitation on a mission to find her family. This new adventure take place six-months after the events in Finding Nemo.
Original director Andrew Stanton is returning to animation following the disappointing performance of his live-action John Carter. The film also features the returning voice talent of Ellen DeGeneres and Albert Brooks who will be joined by Ed O’Neill, Kaitlin Olson, Ty Burrell, Eugene Levy and Diane Keaton. It is presumed John Ratzenberger will also return.
Finding Dory hits theaters June 17, 2016.