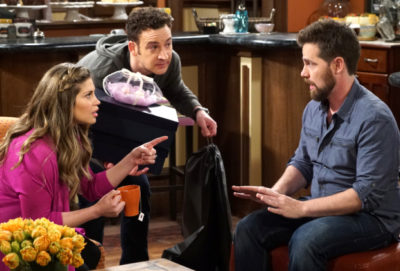 It appears Girl Meets World may not be returning for a fourth season. As pointed out by TV Line, in his latest episode of his podcast Rider Strong said, “We finished the third season of Girl Meets World — my brother and I were directing a lot of episodes and I acted in a couple — and the show ended.” Strong appeared in Boy Meets World as Corey Matthew’s best friend Shawn Hunter, a role he reprised in the Disney Channel sequel.

Disney Channel has not commented if the series will continue on or not, but it is not uncommon for Disney Channel to end its sitcoms after the third season.

Over two decades after Boy Meets World premiered, Girl Meets World continues to follow the life and times of Riley, the daughter of Cory and Topanga Matthews and sister to little brother Auggie. Now entering their first year of high school, bright-eyed Riley and her group of friends – confident Maya, dreamy Lucas and intelligent Farkle – embark on a new journey, navigating through the highs and lows of freshman year. Their beloved middle school history teacher, who also happens to be Riley’s dad, follows his students to high school where he keeps a watchful eye on the group.

UPDATE 1/4/17: The writers of Girl Meets World confirmed the news on Twitter.

It is with incredible pride in our work and complete sadness that things end, that I report to this wonderful audience that our show is over

I just officially got the call, and would like to thank this audience for its incredible love and loyalty. Please watch our January episodes

We leave you with three incredible souvenirs of a show we couldn't be more proud of. As I look back I can tell you with absolute certainty –

We gave you our best.