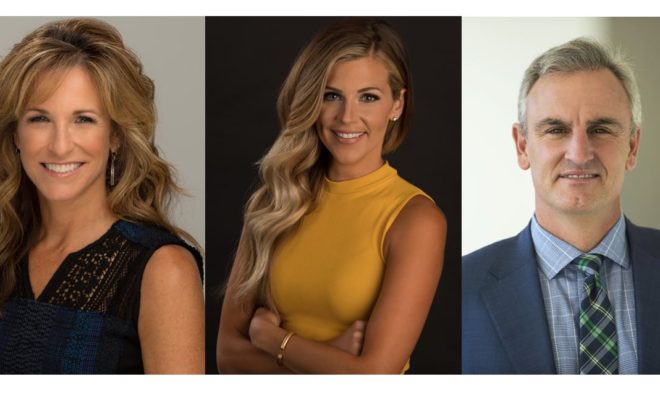 With Chris Berman moving into a new role in 2017, a trio of talented ESPN commentators – Suzy Kolber, Samantha Ponder and Trey Wingo – will assume his previous host responsibilities on ESPN’s NFL studio shows.

“We have three exceptional hosts in Suzy, Sam and Trey, who will usher in this new era of NFL studio coverage on ESPN,” said Stephanie Druley, ESPN Senior Vice President, Studio and Event Production. “They each have a unique style and approach, yet they all share a passion for the game of football that is evident to viewers. We look forward to this group being the face of our NFL studio coverage for many years ahead on ESPN.”

Kolber, who has co-hosted Monday Night Countdown with Berman since 2015, will now host the entire Monday Night Football pregame show from the site of each week’s game. She will also add the MNF halftime and postgame host role to her responsibilities while continuing to anchor weekday editions of NFL Insiders from ESPN’s Bristol, Conn., studios.

“The true joy in this job for me is being at the games and fostering my relationships with NFL coaches, players and executives, as well as our ESPN team,” said Kolber. “Now, having the opportunity to host our entire show from site, as well as halftime and postgame, is an amazing opportunity. This is exactly where I want to be.”

Ponder, one of ESPN’s top college football reporters and a contributor to College GameDay since 2012, becomes the new host of Sunday NFL Countdown – just the third in the 32-year history of ESPN’s long-running Sunday morning NFL pregame show. Originally NFL GameDay, Bob Ley launched the program in 1985 before Berman assumed the role a year later, serving as host for an industry record three decades.

Ponder, a versatile talent with an engaging conversational style, will also contribute NFL interviews and features. She has hosted College Football Live and served as a college football and basketball sideline reporter, most recently on ABC Saturday Night Football and including the College Football Playoff National Championship. She joined ESPN in 2011 as one of the first commentators for The Longhorn Network in Austin, Texas.

“I couldn’t be more grateful to be a part of the Sunday NFL Countdown family,” said Ponder. “There is no such thing as replacing Chris Berman, but the chance to build on his incredible legacy while simultaneously taking new risks to serve NFL fans is the opportunity of a lifetime.”

Wingo will now host all three days of the annual NFL Draft telecast on ESPN, beginning with the 2017 event April 27-29 in Philadelphia. He will also continue to be the face of ESPN’s daily year-round pro football coverage on NFL Live – the show he has hosted since its inception in 2003, NFL Insiders: Sunday Edition, NFL Primetime, and more. Wingo, who joined ESPN in 1997, hosts coverage from key NFL events throughout the year, including Super Bowl, Pro Bowl and NFL Draft.

Said Wingo: “The draft is the only ‘real’ reality TV show there is. No one has any idea what’s going to happen which makes it so fun. When ESPN first asked about televising the draft, the NFL said, ‘Why would you want to do that?’ One of the reasons that made the draft a great watch was Chris Berman. His insight and humor made it so much more than just people reading names. I’m honored to follow in his footsteps.”