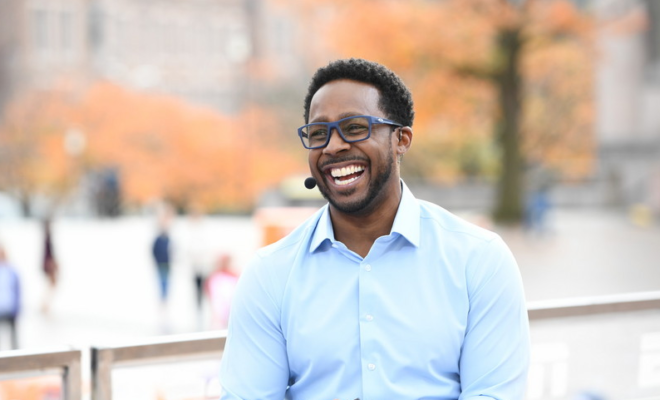 ESPN has secured Desmond Howard – a longtime voice on College GameDay Built by The Home Depot – to a multiyear agreement to remain with the network. Howard has been a part of the seven-time Emmy-Award winning College GameDay – college football’s longest-running and most-celebrated Saturday morning pregame show – since joining ESPN in 2005. He is also a staple on ESPN’s daily, weekday news and information show – College Football Live, in addition to calling select mid-week games during the season. Howard will continue to play a large part on ESPN’s College Football Playoff programming.

“I am both excited and reflective as I embark upon my 13th season with ESPN,” said Howard. “When I transitioned from playing the game to talking about it for a living, I could not have landed on a better team than College GameDay, where I’ve been fortunate to learn from and grow with some of the very best in this industry.

Likewise, I consider myself lucky to be able to travel the country throughout the fall and be surrounded by so many die-hard college football fans who gather together to help us create a uniquely electric atmosphere every Saturday morning… Is it August yet?”

“The name Desmond Howard is synonymous with college football,” said Lee Fitting, ESPN senior coordinating producer. “Desmond has been a key part of our College GameDay family for over 10 years, and will be into the foreseeable future. Desmond has established himself as a respected analyst, and know he is going to continue to deliver honest and thoughtful opinions elevating our college football coverage.”

Howard is joined each week on GameDay by host Rece Davis, along with analysts Lee Corso, Kirk Herbstreit and David Pollack.

“Desmond was obviously a great player and has taken that same flair, style and fearlessness to College GameDay,” said Davis. “Desmond is thoughtful, energetic and never shies away from taking strong stands on issues surrounding the game, and it is that type of honesty and candor that resonates with fans and makes our show better. He has become one of the most respected voices in the game, and I value him greatly as a friend and teammate.”

“I am beyond thrilled that Des is returning to our College GameDay family,” said Herbstreit. “He continues to grow as an analyst and works hard to be dialed in on the subject matters each week. We are fired up that he is back on the desk with the team!”

The Super Bowl XXXI MVP (1997) and Pro Bowl selection (2000) joined ESPN a few years after his remarkable 11 seasons in the NFL. Drafted fourth overall by the Washington Redskins (1992), Howard spent three years with Washington, before spending time with the Jacksonville Jaguars, Green Bay Packers, Oakland Raiders and Detroit Lions. With a memorable postseason kickoff return of 99-yards in the 1997 Super Bowl, he became the first and only player on special teams to be named Super Bowl MVP as part of the Packers.

As a college player at Michigan (1988-1991), Howard was the first receiver in Big Ten history to lead the conference in scoring as he set or tied five NCAA records and 12 single-season Michigan records. In 1991, the All-American won the Heisman Trophy by the second-largest margin of victory in the trophy’s history (85 percent of the vote). He was also awarded the Walter Camp Trophy and the Maxwell Award that year.