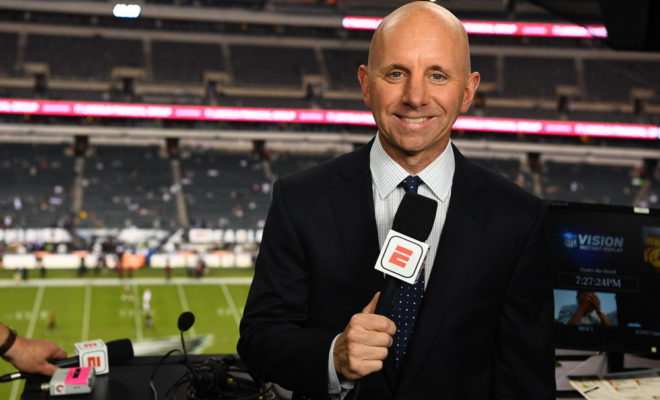 ESPN has announced that Monday Night Football will have a completely new team “in the booth” next season. Play-by-play voice Sean McDonough has signed a new multi-year extension and will rejoin ESPN’s college football team this fall. His assignments will include high-profile national games each week, as well as a College Football Playoff Semifinal. McDonough will continue to call the CFP National Championship on ESPN Radio, marquee college basketball, The Masters Par 3 contest, and more. This follows McDonough’s two season’s as the play-by-play voice of Monday Night Football. Previously, commentator Jon Grudden departed the broadcast team to return to coaching with the Oakland Raiders.

“Sean is so well-respected at ESPN and throughout our industry and we look forward to his return to college football where he will be a signature voice on many of our biggest games, including the College Football Playoff,” said Stephanie Druley, ESPN Senior Vice President, Events and Studio Production. “Sean is a highly-skilled broadcaster who brings great passion, energy and work ethic to every game he calls. In addition to his premier play-by-play skills, Sean excels at storytelling and setting the scene for the emotion and pageantry of college football, which are such integral parts of our presentation.”

“Over the past two years, as I watched college football on television, I realized how much I missed it,” said McDonough. “Being the ‘Voice of Monday Night Football’ was one of the great honors of my life, but I am grateful for the opportunity to return to the unique traditions, rivalries and pageantry of college football and to tell the stories of the participants. I look forward to reuniting with ESPN’s college football team where I have so many close friends in front of and behind the camera.”

Added ESPN Monday Night Football producer Jay Rothman: “Sean is a Hall of Fame broadcaster and person. On behalf of our entire MNF family, I thank him for his outstanding work the past two seasons and wish him well as he returns to college football.”

McDonough, who has been with ESPN since 2000, was a top play-by-play voice on Saturday afternoon ABC college football before moving to MNF. He continues to call ESPN’s Big Monday ACC basketball games and the NCAA Final Four for ESPN International. He has also done play-by-play for Major League Baseball, NHL, tennis, golf, the College World Series and other college sports for ESPN.

Prior to ESPN, McDonough was the television play-by-play announcer for the Boston Red Sox from 1988-2004. He also spent 10 years at CBS Sports when he was the network’s lead college football play-by-play announcer from 1997 to 1999. As CBS’s lead Major League Baseball broadcast voice in 1992 and 1993, he called the All-Star Game, the National League Championship Series and the World Series. McDonough’s other CBS assignments included a diverse array of sports – men’s and women’s college basketball, NFL, golf, U.S. Open Tennis and the Olympic Winter Games.

The NY Post is reporting that Joe Tessitore will be Monday Night Football’s new play-by-play man. This would mean that Tessitore and McDonough will swap roles between Monday Nioght Football and ESPN’s #2 College Football broadcasts.