Last night, we had the absolute pleasure of attending "Marc Davis in His Own Words: Imagineering the Disney Theme Parks with Academy Award-Winning Filmmaker Pete Docter and Imagineer Chris Merritt.” a virtual presentation on the Zoom platform hosted by The Walt Disney Family Museum in San Francisco, CA. Current Pixar Animation Studios Chief Creative Officer and Academy Award Winning Director Pete Docter and Imagineer Chris Merritt took us on a journey through Marc Davis’ move from The Walt Disney Studios to WED Enterprises, sharing stories that appear in their book Marc Davis in His Own Words: Imagineering the Disney Theme Parks.

For those unaware, Pete Docter is the Oscar-winning director of Monsters, Inc. (2001), Up (2009), and Inside Out (2015), and Chief Creative Officer at Pixar Animation Studios. Starting at Pixar in 1990 as the studio’s third animator, Docter collaborated with John Lasseter and Andrew Stanton in developing the story and characters for Toy Story (1995), Pixar’s first full-length animated feature film, for which he also was supervising animator. He served as a storyboard artist on A Bug’s Life (1998), and wrote initial story treatments for both Toy Story 2 (1999) and WALL•E (2008). Aside from directing, Docter also executive produced Monsters University (2013) and the Academy Award-winning Brave (2012). 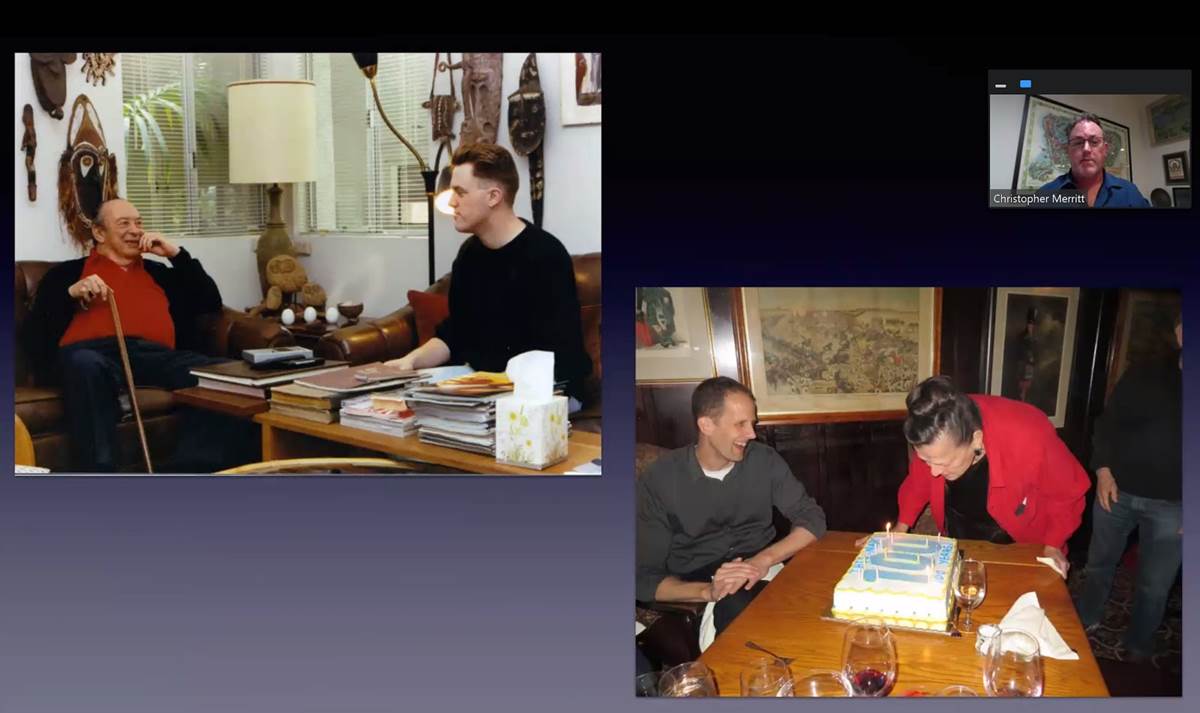 Christopher Merritt has over 20 years of ride and show design experience, creating theme park attractions and environments around the world. He has served as an Art Director and Production Designer at theme parks located in California, Florida, Tokyo, Singapore, and Shanghai. In 2010, Merritt’s Knott's Berry Farm pictorial history, Knott's Preserved, was published to critical acclaim. His book Pacific Ocean Park: The Rise and Fall of Los Angeles' Space Age Nautical Pleasure Pier was released in 2014.

As we learned during this presentation, both Docter and Merritt had a close, personal relationship with both Marc Davis and his wife, Alice Davis. Marc was an animator at Walt Disney Studios, considered to be one of the masters of the artform and one of Walt’s legendary “nine old men.” Both Docter and Merritt became close with the Davis’ when they were studying animation at California Institute of the Arts.

Some of our biggest takeaways from the presentation:

Marc and his wife, Alice (who also worked at the Walt Disney Studios and WED Enterprises), were adventurers of sorts, collecting art and artifacts from their travels, especially after they fell in love with Papua New Guinea. The collections that were displayed and how they were displayed in the Davis’ living room (and pictured in Docter and Merritt’s book) were highly influential to the design of Carl and Ellie and their home in the film, Up.

A majority of the text in Docter and Merritt’s book, Marc Davis: In His Own Words: Imagineering the Disney Theme Parks comes from numerous interviews, seminars, classes, and internal videos from the company. Many of the pictures in the book have never been seen before, some unpublished that were intended for Look magazine that were later uncovered in the Library of Congress after the publication went bankrupt. 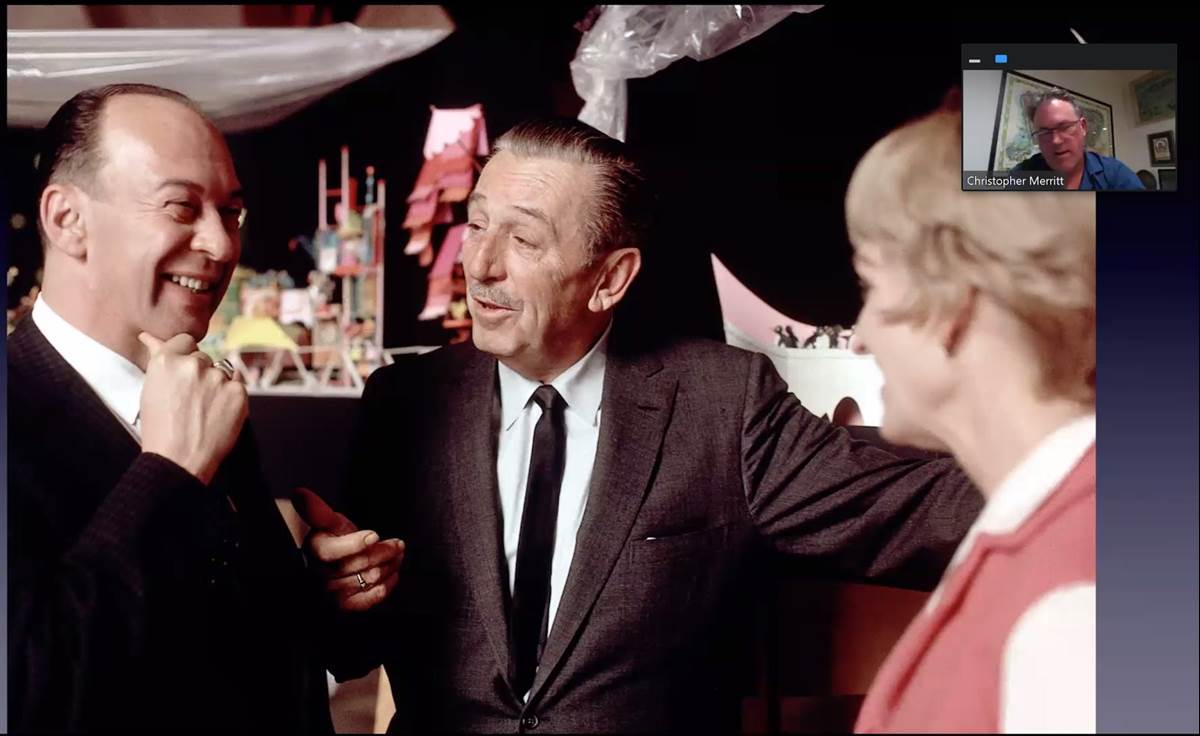 According to Docter, Marc and Alice never had any children. Instead, they “adopted people.”  Docter said he would visit the Davis household, usually to get animation advice but never had a martini made by Marc Davis. According to Docter, Davis was known for making the drink when he had guests and it apparently packed a punch. Merritt said that he would go over to their home for the wisdom and stories of theme park design, and had a martini that knocked him to the ground. Both said they were always fed.

Much of the art in their book was rephotographed using newer technologies from today, making Davis’ work as it did when he first worked on it, with accurate displays of the colors and styles as they were intended. Some of this art includes sketches and pictures of models for the Jungle Cruise at Walt Disney World’s Magic Kingdom. Davis, widely known for his elephant bathing pool scene in the Disneyland classic wanted to have a different take on the new one. This included scenes with man-eating plants that made it very far along the design process, appearing in models and even on production schedules. Marc Davis, as well as his wife Alice, were very close with artist Mary Blair, all of whom worked on the it’s a small world attraction for the 1964-65 World’s Fair. While researching their book, Docter and Merritt discovered one of Blair’s original pencil sketches for a scene in the attraction that had a sheet of vellum paper attached to it. On the sheet were faded markings that once scanned into a computer and photoshopped revealed notes from Davis to Blair, which according to Merritt was “like a time machine where you can hear the conversation between the two.”

Their book also focuses on one of the more personal pet projects of Marc Davis that was never built, the Western River Expedition at Walt Disney World’s Magic Kingdom. Pete Docter got very excited when Chris Merritt originally showed him the art from the lost attraction as it was something he had never heard of until they started working together on the book, being impressed by the scale which would have seen the attraction to be about “two Splash Mountains tall.” 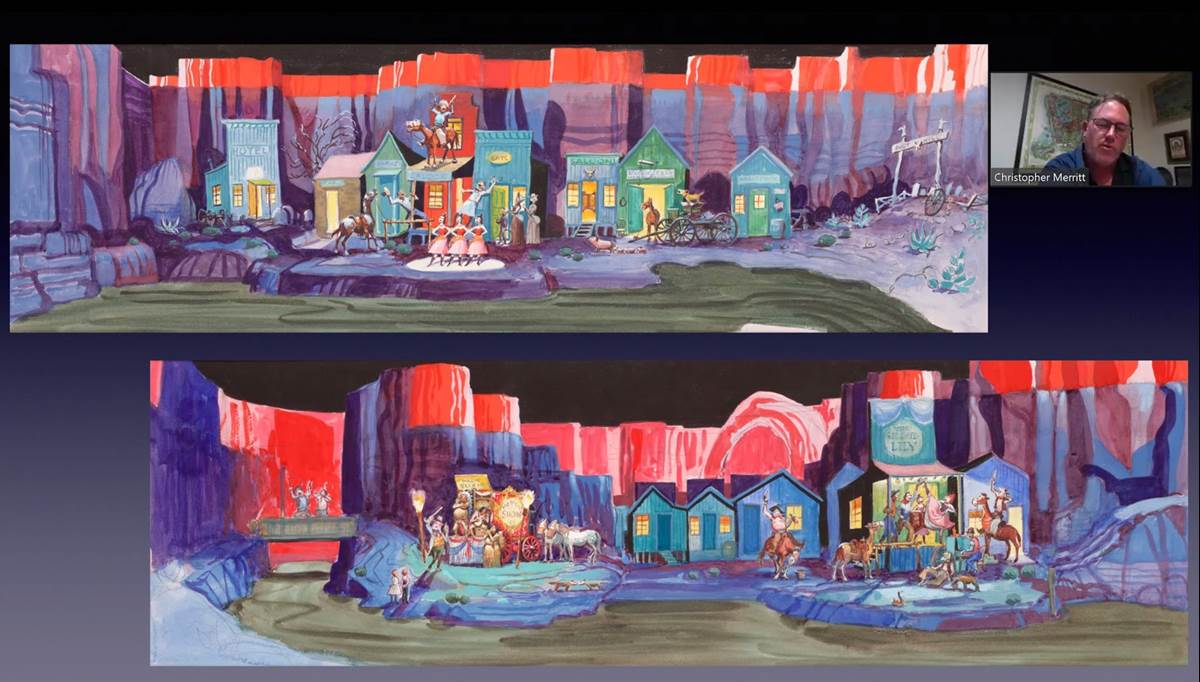 When asked during the Q&A Portion what Merritt knew Marc thought of the Florida adaptation of Pirates of the Caribbean, he said succinctly that both Marc Davis and John Hench sought to “fix the problems” with Pirates of the Caribbean in Florida that were made in the original in California, adding that Hench thought that the grottoes were a mistake and that Davis hated the whole “clackety clackety” of going up a lift hill at the end. Merritt later added that Pirates of the Caribbean was probably the project Davis was most satisfied with during his career.

Docter and Merritt were also asked if both had any personal favorite pieces of advice that Marc Davis had given them. Merritt said that regarding theme park design, he always would hear him saying “you gotta make it read, kid.” meaning that guests will have literally only seconds to see something, and the whole gag or visual cue needs to be picked up on immediately. Docter, the animator, took the wisdom from Davis that you must explore every idea from every angle you can think of, and not just the first one that you saw.