Walt Disney CEO Bob Chapek sat with host Don Yaeger for his podcast, Corporate Competitor, to discuss his journey from high school to the leader of one of the most iconic companies in the world. 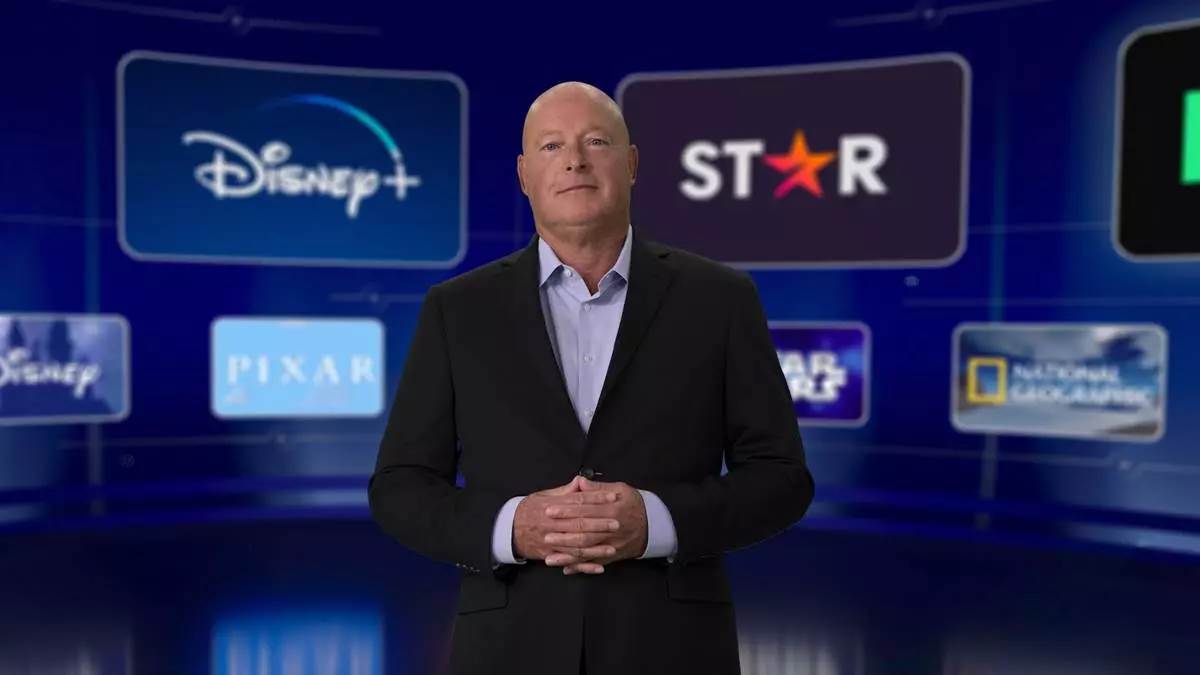 While most people reading this might have a semblance of knowledge about who Bob Chapek is, the name Don Yaeger might not mean anything. Yaeger is a corporate leadership speaker, a longtime associate editor for Sports Illustrated, executive coach and 11-time New York Times best-selling author, many books of which were sports related. This leads to fondness for Chapek based on his experiences in high school as an athlete that were carried over into his leadership style.

Chapek: “Never underestimate the power of one person’s will to get something done. Not everybody starts at the same starting line but through perseverance, hard work, determination, dedication, will power, you can even things up pretty quickly.”

Yaeger opens the podcast with an introduction showcasing Chapek’s career, but says that he’s excited to hear more about how Bob’s track and field experience shaped his journey to CEO. Although on the Track and Field and Cross Country Teams at his high school in Hammond, Indiana, Chapek would run around the city wanting more when not in competition.

Chapek: “It wasn’t just the miles it was where I was doing the miles….this was not an idyllic meadow…I was going from under the smokestacks of a steel mill, to under the smokestacks of an oil refinery, past the soap plant that was belching out stuff that I’m sure they’re not allowed to belch out these days…. I sort of persevered and wanted more. I wasn’t the greatest runner in the world, but I did what I could and every time I wanted to stop because I was tired I kept going and that did become a bit of a metaphor for me trying to run to someplace that I’d feel more comfortable in my trying to break the cycle and be one of the few kids that went on to college and found something else.”

“I think one of the greatest strengths in the world is willpower. Individual human willpower. To an extent, running for me was a symbol of wanting to persevere and do something bigger and better. Since then, I’ve seen it at work in countless places. Never underestimate the power of one person’s will to get something done.” 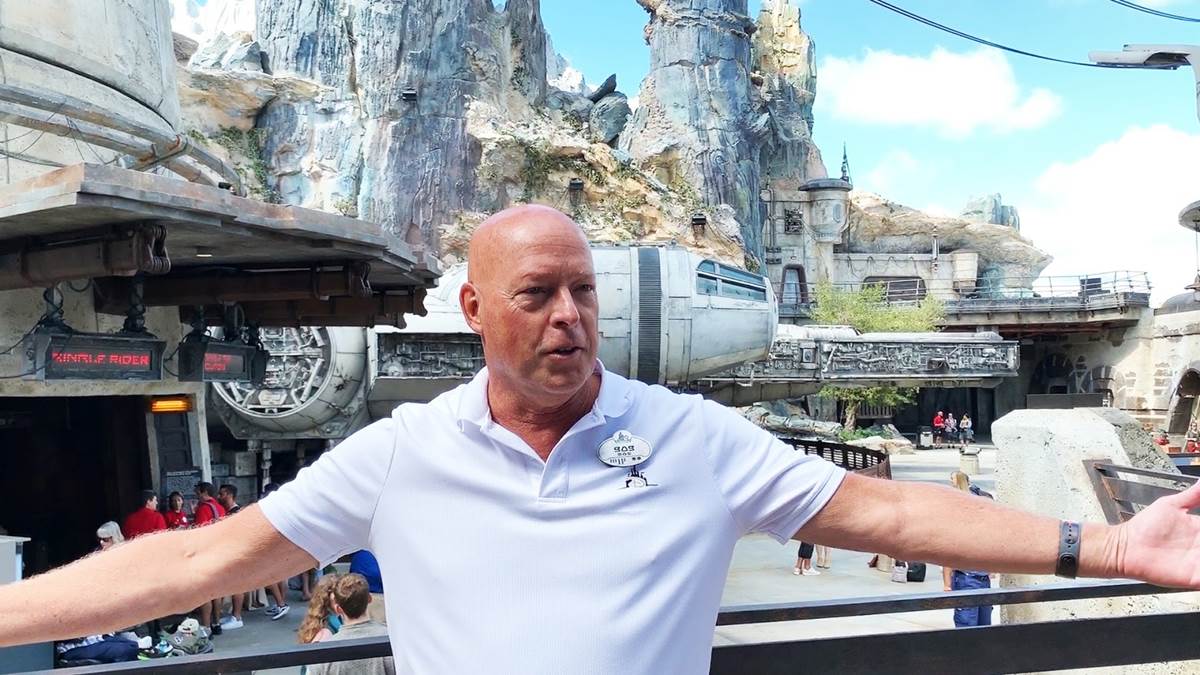 Aside from the sports teams, Chapek also spent some time on his high school’s Scrabble team, where he says now he would have made his longest word ever played would have been “Supercalifragilisticexpialidocious” and he would have put it on numerous triple and double score spaces. This all leads into his first trip to Walt Disney World which became an annual tradition for his family, as well as an embarrassing picture with a young chapek and Cinderella. Maybe that embarrassment is why Chapek saw his first job at the Walt Disney Company as a “packaged goods” job. Just a job. He always had an affinity for the company he says, but it was never somewhere he aspired to be, or one of those “dream job” situations that kind of permeate among the Cast Members of the Walt Disney Company.

Citing his undergraduate degree in Microbiology, he says he always saw himself in a pharmaceutical company, but instead found himself at the Walt Disney Company in the home entertainment division selling VHS tapes, then DVDs, then Blu-Rays, and then digital files before he ended up taking over parks and resorts, which ultimately led to the CEO gig. 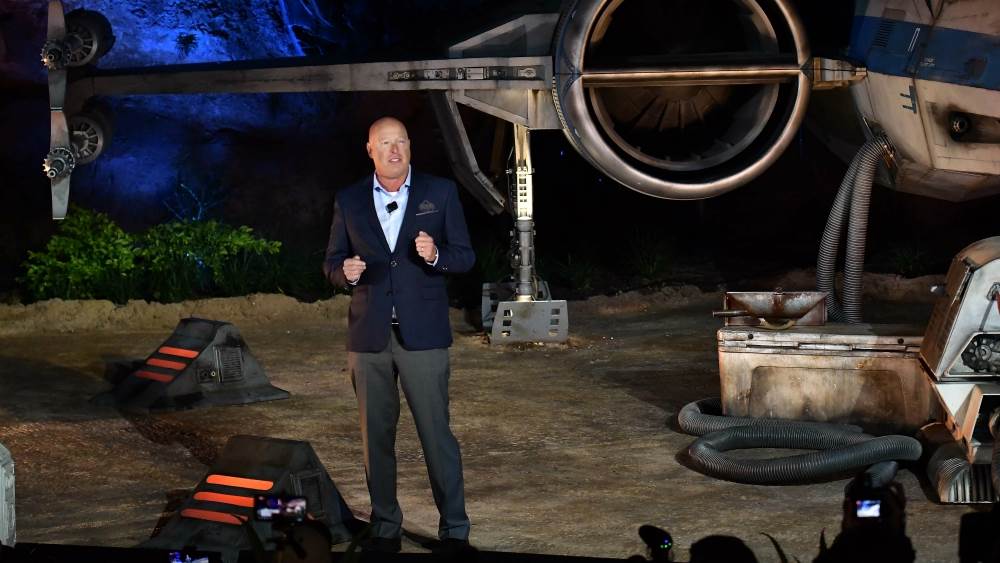 Yaeger refers to a commencement speech that Chapek gave the class of 2015 at his Alma Mater, Michigan State, and asks him about three things that would be the hinges of success: God-given talent, determination, resourcefulness and willpower, and creating your own luck by doing the hard work, saying during that speech “luck is what happens when preparation meets opportunity. To this day, I over prepare for pretty much everything.” Chapek goes on to share a story that he had a habit of keeping a copy of a speech he was giving every time folded in his pocket just in case the prompter ever went out. Time and time again he would do this even though the prompters never failed….until one day, it did. Luckily he had that speech folded in his pocket.

He also goes on to explain his process of thinking out answers to “Third-derivative” questions for board meetings and other situations, and uses that as a metaphor for his preparedness, saying it has to get to that level. He used the example of a board meeting, “how is X-Y-Z coming in China?” with a follow up to the answer of that question, and the next level of questioning that might come after that response, saying that's the level he prefers to have things prepared at.

He’ll work with teams to learn as much as he can to prepare, sometimes for weeks leading up to an event, before he does a method he calls “pencils down” where he isolates himself to compile all the information without any help to bear down and focus on the task at hand.

The Walt Disney Company has a legacy that many feel should not be strayed from, many of those even in the ranks of the company. Aside from being on “the front end of the wave” as Chapek puts it, where he says that you are most prepared for change if you are the one changing things, as he did with the focus on and radical growth of Disney+. With a company that’s culture is as organized as the Walt Disney Company, Chapek focuses on two things that make a great leader, especially for a company 175,000 deep.

Chapek: “I always say there’s only two things you do as a leader, pick the hill you want to take, what's the vision, what's the goal, and then you lead a whole bunch of people up that hill with you… I find in big organizations the toughest thing is what we like to refer to as ‘The Frozen Middle.’ In other words, it's easy to promote change or cause disruption, create transformation, amongst your direct reports. Then the question is how do you create ambassadors out of them, so eventually within a short period of time you have a complete transformation throughout the entire company. That middle is where it's really tough because you have people that are sort of vested in ‘the old way’ of doing things and you’ve got to get them thinking  differently but they already feel like they have an investment in the way it was. The middle of the organization is generally always the toughest.” 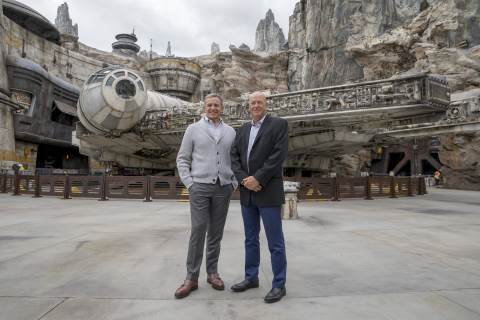 But what makes a team more than a group of individuals wearing the same colors, jerseys, or seeing the same logo on a paycheck? According to Chapek, it’s shared values.

“This starts in the recruiting process. You have to have shared values…Sometimes the toughest hires you do to fill a role are people outside the company, particularly the more senior they are because they haven’t necessarily grown up with the same shared values if they come from a different company. There is a direct correlation between the long term success of somebody with how long they’ve practiced their art and function outside of the company. It's a strong culture and we have a lot of shared values. Most Disney, I don’t know what the average is, but we have many many many people, 20, 25, 30, 35 years at the company, so we’ve got shared experiences and shared values. That is the essence of what a culture is that is frankly, going to way out date me. This company is way bigger than me and I inherited those cultural values from those people that came before me, Bob Iger, Michael Eisner, who all created this entity that is going to [outlive] all of us.”

Yaeger and Chapek both serve on the Board for the Make-A-Wish company and they also discuss the iconic nature of the Disney Brand, as well as Pixar, Marvel, and Star Wars, and mention that over 50% of wishes from the kids in the Make-A-Wish program ask for a Disney wish. The premise of the podcast as a whole is based on the research that a disproportionate number of Fortune 500 executives had a history of active engagement in sports at a high school or collegiate level, so sports analogies and experiences are peppered throughout the discussion. You can listen to this entire episode of Corporate Competitor Podcast here.