When Galaxy’s Edge opened, it was great to see merchandise that was part of the storytelling that wasn’t just slapping a logo on to a T-shirt or magnet. While the range of items at Avengers Campus is not nearly as wide, given the land’s smaller footprint, it shows Disney merchandise’s commitment to innovation and trying new things.

The marquee item is the Spider-Bot, which is the chief antagonist of the WEB Slingers attraction. While the Spider-Bot was previously available, what’s new are the tactical upgrades that can give your bot powers inspired by characters such as Black Panther, Iron Man, Black Widow, Ant-Man, and The Wasp. While they can play on their own, the true fun is when they battle each other. So hopefully you have a friend who is willing to take you on. 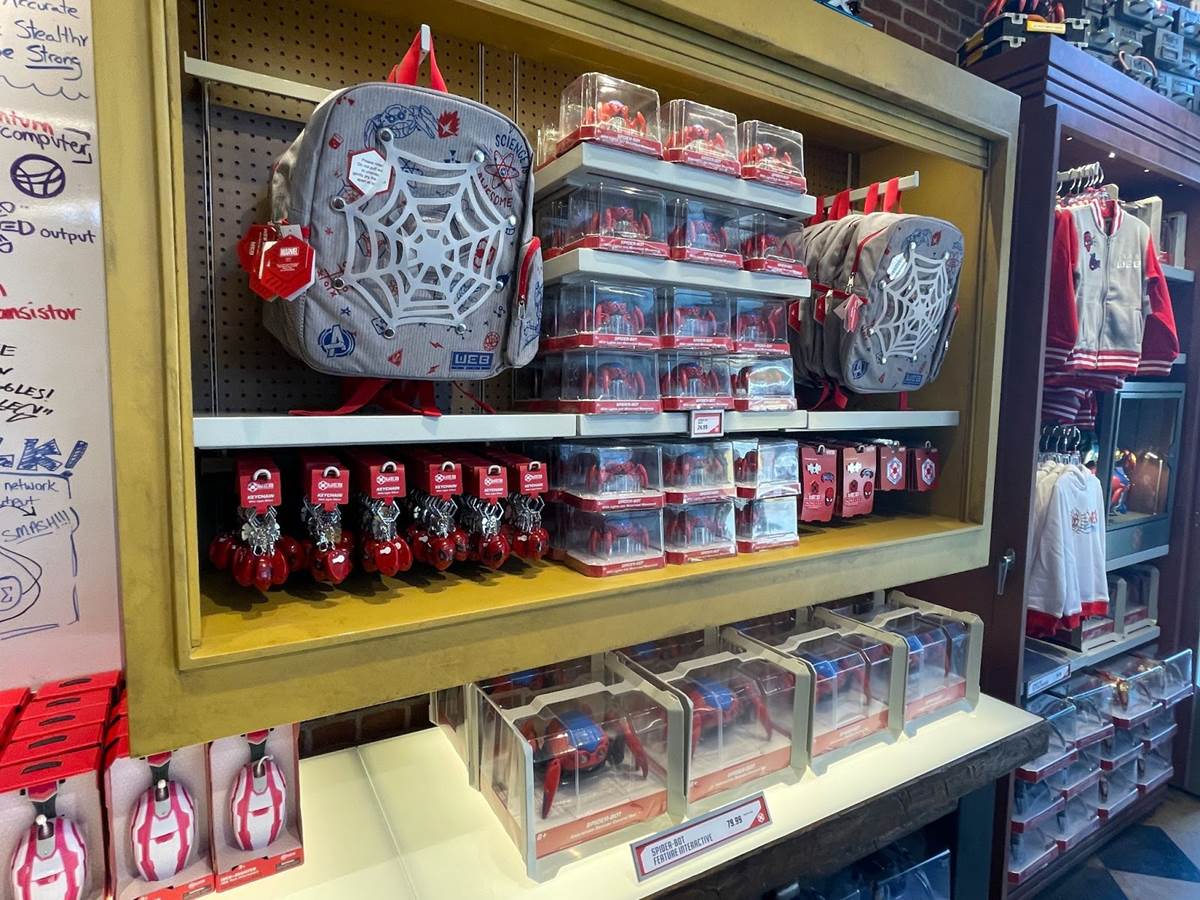 The Spider-Bots can be carried in a web-mesh backpack, which can fit any bot, even with any of the tactical upgrades. If you don’t want to carry your bot around, you can use the webbing to carry other items such as a water bottle.

Another fun item are Spider-Man goggles that light up and feature over a dozen Spider-Man looks. I also enjoyed the Pym drinkware collection that features an assortment of laboratory inspired containers, as well as an Avengers Campus bag that can be used as either a backpack or a duffel.

Many have wondered about the WEB Power Band and the other extensions. While I didn’t get a chance to experience the attraction with them, I will say it is very possible to get a high-score without them, so they are not required. That being said, I do like how they can play in both the attraction and at home. The base mode allows you to shoot multiple webs on the attraction, while the Spider-Man and Ghost Spider extensions include electro-dynamic webs. At home, they actually shoot webs, which retract back in. The Iron Man and Rescue repulsor cannons change their webs to repulsor blasts on the ride, but at home shoot blasts of air. A trio of lightweight orbs can be used at home to levitate above the air blasts. But to me, the hidden gems are STEM inspired sets that allow you to have more fun once you get home. One set allows you to make your own webs, while the other helps you create some gamma ooze. Getting to play at home does help ease the disappointment of no longer being at the Disneyland Resort.

The WEB Suppliers merchandise location continues the “maker space” feel of the attraction, complete with Spider-Bots that come alive around the store. Behind the registers are also the current leaderboards from the attraction so you can keep tabs on your performance.

Though the shop is cool, I would highly recommend picking up your merchandise at the Backlot Premiere Shop. That location has significantly more space, while having a larger assortment of merchandise. That way you don’t need to lug all your treasures throughout Avengers Campus.

The initial wave of merchandise has brought me much joy. As we have seen new items pop-up in Galaxy’s Edge since its opening, I hope that they will continue developing fun new products for Avengers Campus, perhaps even based on new Marvel storytelling from the comics, movies, and the land itself.