Clones have been a big part of Spider-Man lore for  very long time. Peter Parker dealt with all kinds of headaches because of clones and, just recently, Miles Morales got a clone saga of his own. We thought he had put that nightmare behind him (well, mostly) but it appears it has come back in the worst way possible.

“Miles Morales: Spider-Man #38″ is the first part of the new “Empire of the Spider” story arc. Miles and Shift have been jumping around the multiverse and now they find themselves in an unfamiliar version of their home with a family foe at the center of everything that is wrong with this version of New York. 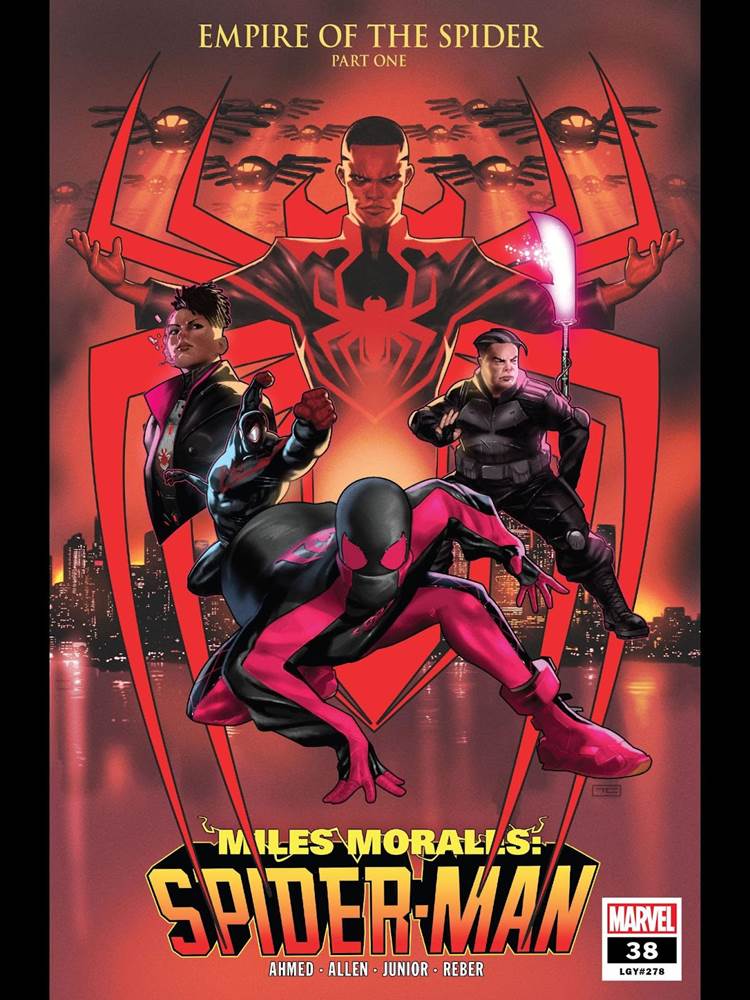 Miles and Shift find themselves in a futuristic version of New York where Selim is ruling over his Empire of the Spider. It doesn’t take long for Miles to realize that something is wrong and that whole “with great power” thing kicks in pretty quickly.

Things get far more complicated thought when Miles realizes exactly who has been fighting Selim all this time. In this alternate and certainly dystopian future, Miles is gone and those he loves have been left to defend New York from his evil clone.

Naturally, despite the fact that he could simply leave this reality behind and return to his own, Miles wants to help. So now Spider-Man has become a part of this ragtag army of rebels fighting against impossible odds with his clone calling all the shots. 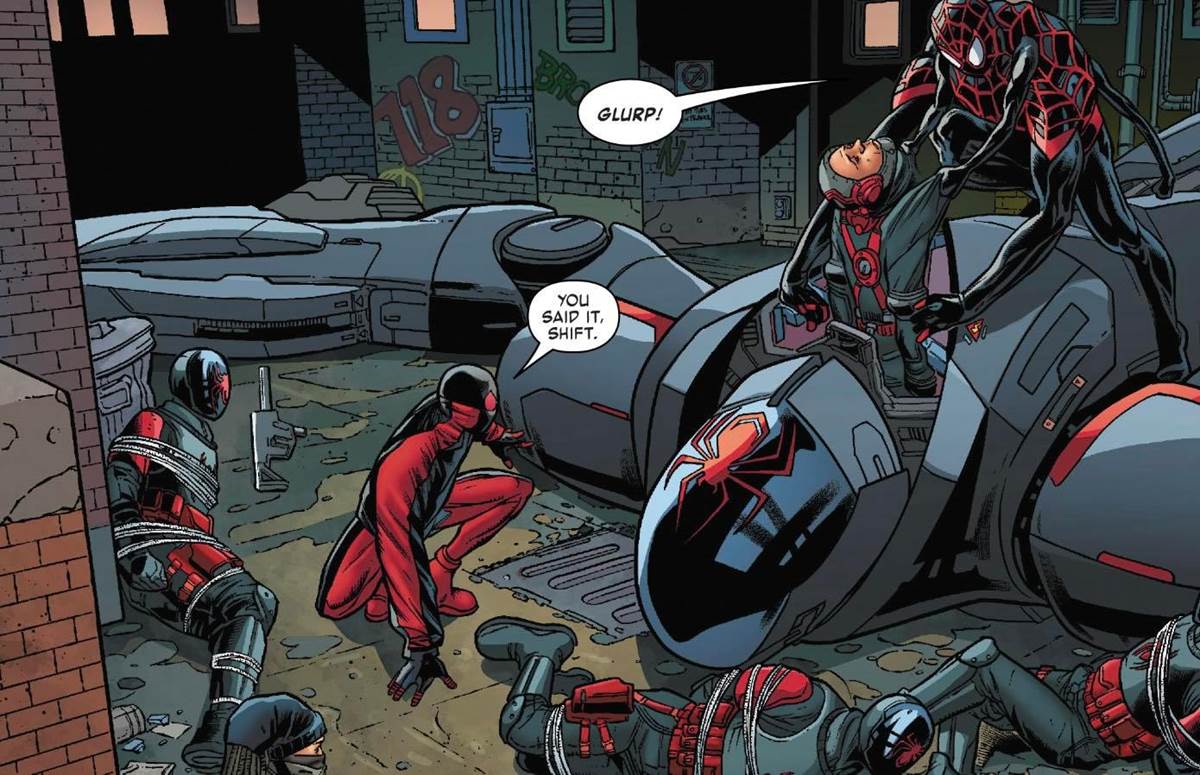 Sci-fi isn’t a genre that is all too unfamiliar to Marvel Comics, but boy does this one lean hard into that genre. This feels like a Terminator film in comic form with Spider-Man at the helm. In other words, it is awesome. This blend of genres makes for a really fun story with a lot of interesting characters involved.

And speaking of those characters, this comic provides some very interesting new looks at a lot of them. I won’t go into specifics and spoil anything, but readers get to see a lot of familiar characters in completely different ways and, of course, a lot older. It creates an interesting dynamic with Miles seeing them this way as well. 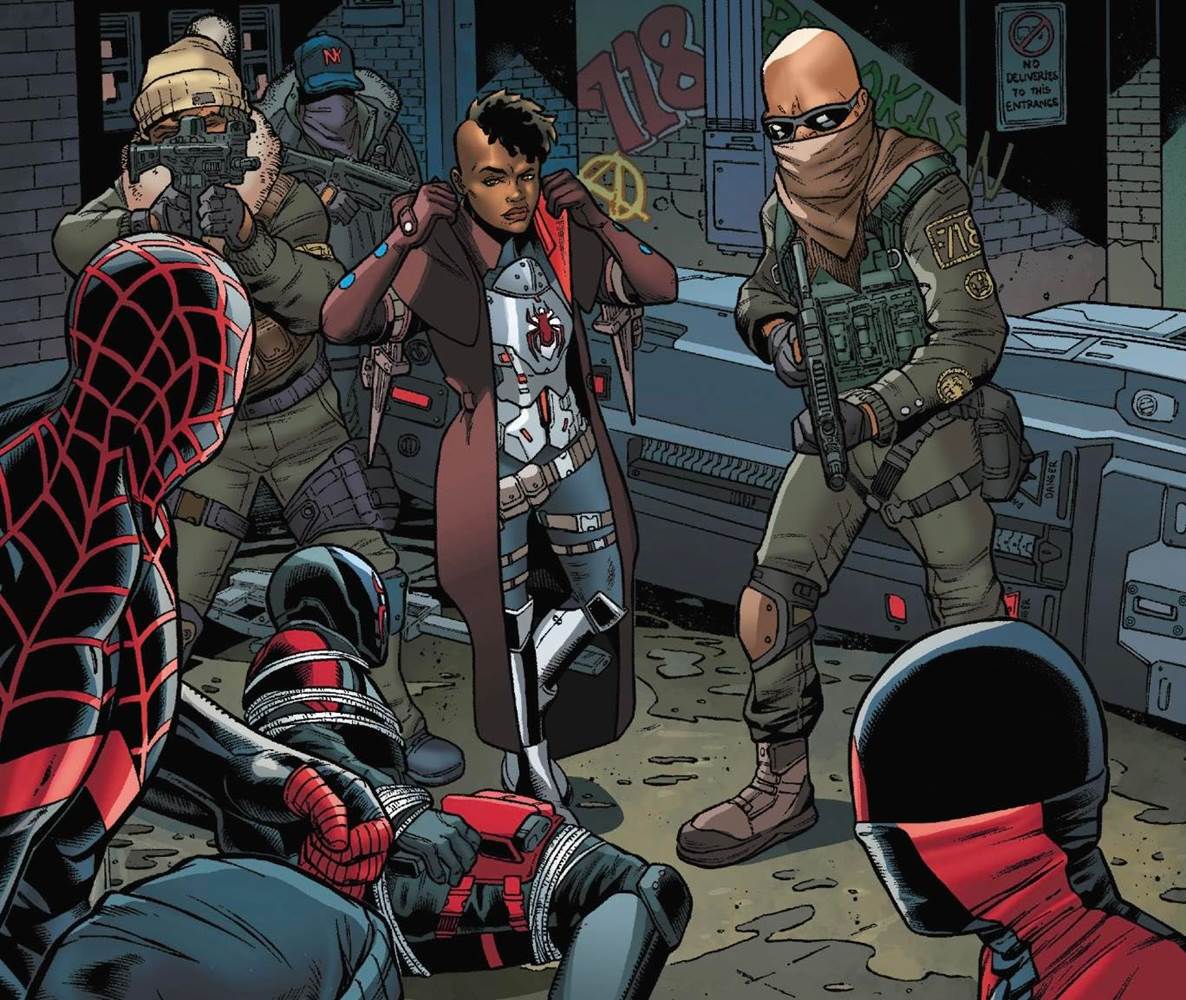 Selim is a much more interesting character in this contest as well. Previously, he had simply been an evil clone, a rehash of old stories we had seen before. And, while we don’t particularly see a lot of him in this issue, it’s clear he has a much bigger and very different role to play in this story. He has become a much more menacing villain and one who poses a much bigger threat than ever before.

While the story is great, a big component of the success of this issue is the artwork. Alberto Foche Duarte and Christopher Allen knocked the visuals out of the park in this one, capturing a whole lot os Spidey action perfectly. They also accomplished that difficult task of delivering a dark tone to the whole book while still providing plenty of color.