It was a beautiful day, the sky clear and blue, with the park decorations being transitioned from Halloween themes to Christmas themes. The Disneyland Marching Band was seated left of the shrouded replica window, facing the guests. 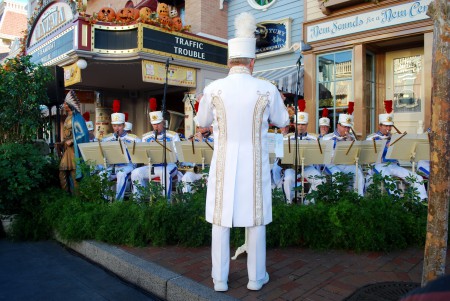 The band played, and Tony was introduced and arrived on a horseless carriage, being greeted by various people in the crowd. 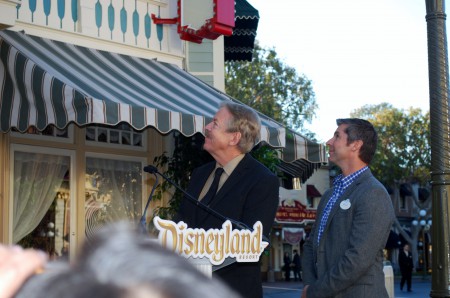 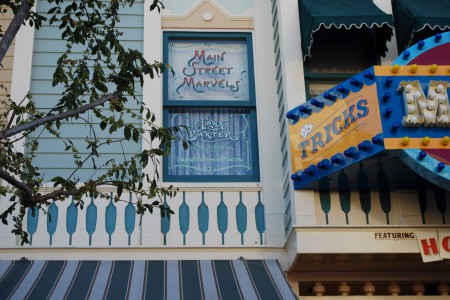 The Newest Window on Main Street Tony Likes the Sight of the Window

The last line alludes to the original Journey Into Imagination attraction at EPCOT Center, of which Tony was Show Producer. It is a modified line from the attraction’s theme song. “Marvels” can have at least three meanings, given that the character that became Dreamfinder in the attraction originally had the name of Marvel, and two things Tony had been involved with just before his retirement.

When it was time for Tony to speak, he pretended he was going to give quite the long speech, having someone hand him a larger stack of papers. Tony ended up talking about his personal journey, but spending the bulk of his speech focusing on teamwork, including talking about teachers, mentors, leaders and managers, partners and peers, and those he has mentored, mentioning many people by name. As good as Tony has been about speaking up for himself, he’s also been quick to give credit to others and highlight their contributions, and his comments reflected that. In a bittersweet moment, he mentioned Randy Bright, Bruce Gordon, and John Stone, three Imagineering peers of his who left us too soon and should have been there to celebrate. 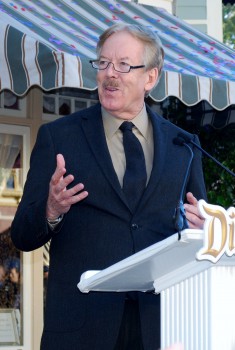 After the ceremony, people were gathering to get pictures and interviews. Rather than standing around in that crowd, we quickly made our way to the private reception in the lobby of the Disneyland Opera House. It took a while before everyone, including the Guest of Honor, trickled into the reception.

We were able to pull Richard Sherman aside and thank him for having taken the picture with us, and to relate to him a story I could barely get out because I was choking up. Long before I knew my lovely bride Kori, she was stricken with a mysterious disease at age nine. Nobody, not even the experts, knew if this daughter of a medical doctor and a registered nurse was going to live or die as she frustratingly lost her ability to speak, her physical coordination, and her energy. She had trouble going to sleep at night because looming over her head was the entirely realistic notion that she might not wake up. To ease her into slumber, her sister would sing her to sleep with the Sherman Brothers song “Fortuosity”. Richard was touched.

That was just one of those special moments made possible through our friendship with Tony.

However, the day was just getting started! 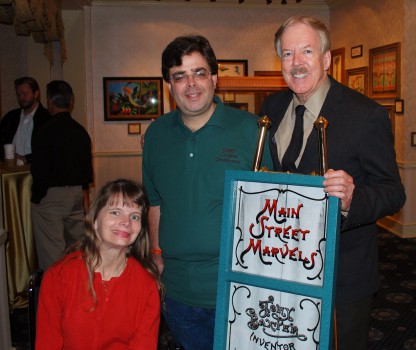 It’s a Time For Celebratin’ Today

We waited until the reception ended and those of us remaining moved on to the Plaza Inn restaurant for lunch and more conversation. Plaza Inn was where Kori had worked in 1996 and 1997, having recovered enough from her illness to become a Cast Member, complete her studies, and become a registered nurse like her mother before her.

From there, escorted by a “suit” and a “plaid”, we went to enjoy Star Tours, riding twice in a row without having to leave our seats, then on to the Indiana Jones Adventure, Haunted Mansion Holiday, and Splash Mountain, where much of the animation and lighting were not operating as designed. As Tony and I discussed that, I reminded him that one of the first things he ever said to me was an expression of his frustrations, relating to Splash Mountain. From there, it was onto get a close look at Fantasy Faire, and finally the new Thor meet-and-greet in the Innoventions building. We did all of it without waiting. Along our privileged, escorted travels through the park as a parade of current and former Cast Members, Imagineers, and enthusiasts (and family), at least one passing guest recognized Tony, stopped to shake his hand, and then moved along, a smile on his face and a hand to his heart like he’d just crossed a major item off his bucket list.

Our celebratory Disneyland tour was concluded so as to allow us to make our way back to our automobiles and make our off-property dinner reservations, where over a couple dozen of us ate and chatted for three hours or so, which is not unusual for a dinner out with Tony.

To my surprise, after such a long and exciting day, Tony still did his habitual thing: he invited everyone back to his place to enjoy some home theater viewing.

However, I had a prior commitment to record for podcast an interview with Bob Gurr. I’d seen Bob at the event earlier in the day and had talked a bit with him then.

You know you are living a dream day for a Disneyland enthusiast when you have to bow out of an invite to Tony Baxter’s house so you can talk with Bob Gurr. The only thing missing was hanging out with the Moseleys.

We did have the option of re-joining the group at Tony’s after the podcast recording was completed, but Kori and I were exhausted and opted to call it a day,

Once again, we’d had a magical day because of Tony Baxter. I share such details with you here to point out that even after all of these years, Tony still enjoys Disneyland and talking about it with others. Well, that, …and so you can eat your heart out. Other than when other people think about to whom I’m married, it isn’t often that I get the feeling of being envied.

Ken Pellman is a Public Information Officer, ghost/freelance writer/editor, frequent co-host of The Sweep Spot podcast, and Disneyland Annual Passholder with 15 years of experience as a Disneyland Cast Member. He has a BA in Thematic Environmental Design from California State University, Fullerton and resides in Anaheim with his wife, two kids, and dog. Ken can be followed on Twitter @kenversations and found online at www.Pellman.com

The views, opinions and comments of Ken Pellman, and all of our columnists, bloggers, and reviewers, are not necessarily those of LaughingPlace.com or any of its employees or advertisers. All speculation and rumors about the future of the Walt Disney Company are just that – speculation and rumors – and should be treated as such.