Everybody’s Got a Laffin’ Place

Who else but a Disney theme park enthusiast says, “I’m so excited about going to a window dedication!”? 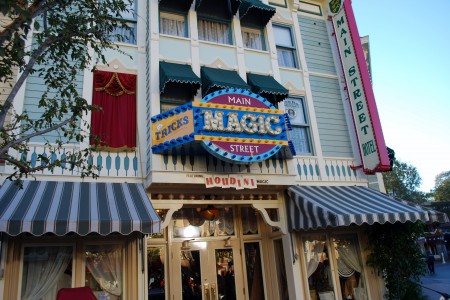 A window awaits its debut

If you don’t yet know, a “window”, in this case, refers to the widows on the second and third levels of Main Street, USA at Disneyland. The names of the people on those windows, along with their fictional business names, honor people who built Disneyland.

One of the reasons Disney remains special and has the kind of staying power and influence that it does is that it maintains a self-promotional institutional memory, in part by honoring the people who have significantly contributed to the legacy the organization continues to tout and call on its workforce to reinforce. With Disneyland, a high honor that evokes the past is being awarded a window on Main Street, USA. Disneyland enthusiasts can pass the time on a busy day looking up at the various windows and thinking about the contributions of the people whose names that appear there. Cast Members can swap memories of times gone by when that person was working at the Resort. Things like a window on Main Street and the ceremony to

unveil one can be important reminders and rituals that provide constancy, meaning, and a sense of history. Honoring the past can help those in an organization keep proper perspective on the present and grow into the future.

When a notice arrived in our electronic inbox inviting us to Tony Baxter’s November 1, 2013 window dedication ceremony, I called to respond immediately. Almost nothing could keep us away from this.

I detailed in my first written piece presented on LaughingPlace.com and in an edition of The Sweep Spot podcast how I first came to know Tony. Not only was he one of the guys responsible for the object of my one-time obsession – Splash Mountain – and someone who was working successfully as a Disney Imagineer, which by then I wanted be, but he was very approachable and someone who was genuinely a Disney and theme park enthusiast himself. So like so many others who have crossed his path, I established an ongoing friendship with him, centered on a mutual interest in, and enjoyment of, Disney, theme parks, movies, entertainment in general, and people who make such experiences special.

Hang On to Them Hats and Glasses

Tony’s timing was part of his success. As a boy, he watched the Disneyland television show and the opening of Disneyland, and then would visit the place to marvel at what he experienced there. He worked at the park in front-line operations while Walt Disney was alive and interacting with the Cast. He worked as an attractions operations host in the newly overhauled Tomorrowland of 1967, which was an education all in itself. When the Imagineers of the first generation were installing such hallmark attractions as Pirates of the Caribbean and the Haunted Mansion, he was around to watch. He was able to find mentors in those original Imagineers due to the differences in their ages and their stages of their professional careers. They were the seasoned, retiring veterans and he was eager youngster, just starting out.

With park operations experience, formal education in theatrical design, a design portfolio, and a gifted imagination, he was promoted to WED Enterprises (now Walt Disney Imagineering).  He worked on the opening of Walt Disney World and was around for the creation of EPCOT Center. After surviving through the end of the first phases of EPCOT Center and Tokyo Disneyland, he was there when Michael Eisner and Frank Wells brought new leadership to the corporation and they supported him enough that his projects became part of the revival of Disney, changing the skyline of Disneyland and inspiring additions to other Disney theme parks.