After a full day of eating and watching all six films from Phase One of the Marvel Cinematic Universe (view the full article here), it’s almost time for Avengers: Age of Ultron. This program was designed so that you can watch all four films from Phase Two (so far) that lead into the new Avengers film with enough time to get to your nearest cineplex for the late show. So strap yourself in and prepare for the Marvel Cinematic Universe to change forever with this Phase Two marathon. 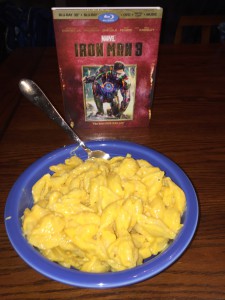 Phase two begins with Iron Man 3 where Tony Stark comes to terms with what happened in New York and faces off against an evil organization who have genetically engineered themselves with Extremis. If this mac & cheese doesn’t cause your body to start repairing itself or explode on the spot like Extremis, then I don’t know what will. This recipe takes about an hour, from cooking the pasta to removing the final dish from the oven. Makes four servings. (Inspired by a recipe on Food.com)

Cook the pasta until al dente. Meanwhile, preheat the oven to 350 degrees. In a large bowl, combine the sour cream and cheese soup mix together until well blended, then stir in cheese cubes. When the shells are cooked, drain them and toss the noodles in the cheese mix. Spread the mixture into a casserole dish and bake for 30 minutes, stirring midway through. The cheese should be completely melted when it’s done. Stir in salt and pepper to taste. 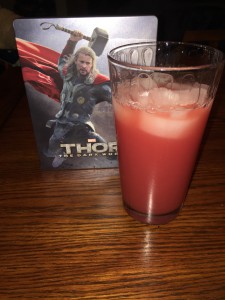 As the convergence approaches, Dr. Jane Foster finds herself in “the dark world” when the Ether consumes her body in Thor: The Dark World. Well, now the Ether can consume your body too! Bottoms up. Makes four servings and takes less than five minutes to make. (Inspired by a recipe on Food.com)

Stir ingredients together and serve over ice. 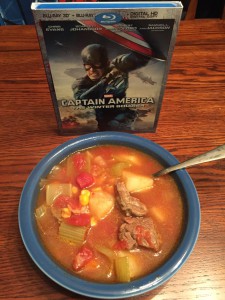 We’re serving up more Steve Rogers comfort food for Captain America: The Winter Soldier. In the heart of winter, all you want is a nice bowl of delicious, hot soup. I’d imagine it could warm your heart anytime of year… even if you just found out the company you work for has been infiltrated by the very same evil organization you gave your life to save. Dig in! Makes 4 servings and takes about two hours to make. (Inspired by a recipe on Food.com)

Cut beef into bite-sized pieces. Heat 1 tbsp olive oil in the bottom of a large pot and brown the edges of the beef, leaving the insides pink (about 5 minutes). Remove the beef and set aside. Warm the other tbsp olive oil and sauté onions and celery until tender, about 10 minutes. Add the water, beef broth, beef, carrots, corn, tomatoes, bay leaves and garlic powder to the pot and bring to a boil. Reduce to a simmer and cook for an hour. Then add the peas and hot sauce and let cook for another 30 minutes until the beef is completely cooked through. Remove the bay leaves before serving. 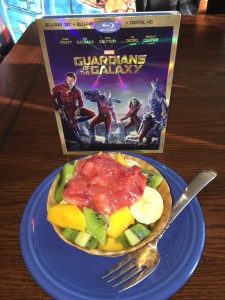 Peter Quill was taken off our planet at a young age and grew up in outer space, becoming the outlaw Star Lord and eventually the leader of the Guardians of the Galaxy. While this dessert is completely terrestrial, it looks and tastes out of this world. Makes four servings, takes about ten minutes to make. (Inspired by a recipe from Better Homes & Gardens)

Peel the mangos and kiwis and cut them into bite size pieces. Peel and slice the bananas. Add an even amount of fruit to each waffle bowl. Slice and hull the strawberries and puree them in a blender. Add the strawberry puree to the top of each bowl and enjoy.