The Legacy Collection: Lady and the Tramp Soundtrack Review 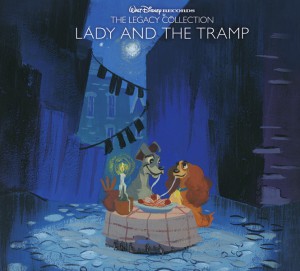 Walt Disney Records made an announcement in March about the future of their prestigious Legacy Collection line. Due to production setbacks, release dates were changed for many of the titles including some being exclusive to certain retailers for a limited time. The seventh installment in the series is the first to be released under this altered release schedule. Lady and the Tramp is now exclusively available through Intrada (wide release isn’t until August 28th).

This 2-disc set features the full soundtrack on disc one. It repeats the exact same contents from the 1997 version of the soundtrack, which was restored by Randy Thornton using original mono recordings of the film score (dialogue elements are in stereo). It presents the entire film score and unlike Pinocchio, nothing seems to be missing. Those hoping for a brand new remaster will be disappointed, but the work done eighteen years ago is excellent and still holds up today. This was my first time listening to the score outside of the film and I was surprised by how dynamic it is, often becoming intense during scenes depicting dogs fighting. The film has such a pleasant tone and it is a testament to the amazing work of Oliver Wallace that his score complimented those scenes so well that it was almost unnoticeable.

Disc two is split between two sections. First is “The Lost Chords,” which features two songs between three tracks. The first is called “I’m Free as the Breeze,” which was a song Tramp would have sung when he met Lady. This song was written by Eliot Daniel and Ray Gilbert from an earlier draft of the story and is presented as both a demo and as a newly recorded track. The second song is called “I’m Singin’ (‘Cause I Want to Sing)” written by Peggy Lee and Sonny Burke for Tramp. The demo is absent, provided only as a newly recorded song.

The rest of disc two consists of the six songs from the film from the original Disneyland Records soundtrack. Because Peggy Lee was signed to Decca at the time, they couldn’t use her voice and opted to completely re-record all of the songs. These versions are what fans enjoyed up until 1997 when the full soundtrack was made available for the first time. The singers on these tracks are Terri York, Robbie Lester and Bob Grabeau. Some of them feature extra lyrics that weren’t used in the film and this version of “Peace on Earth” features the song as Peggy Lee originally intended, juxtaposed to “Silent Night.” The total run time of disc two is a short 22 minutes.

This release is housed in a digipack case, just like the previous Legacy Collection releases. The cover and book feature new artwork by Lorelay Bove. The first section of the book is written by Disney historian Jim Fanning and features some great details about the history of the Lady and the Tramp project and some insight into Peggy Lee and how she came to be involved. Then her granddaughter Holly Foster-Wells shares some anecdotes about how much the film meant to Peggy. This is followed by some producer notes from Randy Thornton with great detail on how the soundtrack was restored. The Lost Chords section gives insight into the two tracks included on disc two. The last two sections feature lyrics to all of the songs and concept art from the film with explanations by Dave Bossert.

The Legacy Collection strives to offer soundtracks to some of Disney’s best films in their most complete form. They’ve definitely accomplished this with Lady and the Tramp, but disc two feels a little underwhelming. The main reason for this is the exclusion of so many Lost Chords, which are mentioned in the book. They’ve included one song from the earlier version of the score by Daniel and Gilbert out of eight that were written. The book also mentions three other songs by Lee and Burke that could have been included, but weren’t. The main reason for this is obviously the cost to produce them. I’m assuming demos exist, but perhaps using Peggy Lee’s voice beyond what’s in the film’s soundtrack would be too expensive.

It’s great to have the original alternate soundtrack included on disc two, but there’s actually a song that’s missing. The full soundtrack is available on iTunes and the first song called “Lady” is a medley of highlights from the score that should have been included (the other omission is intentional – “Home Sweet Home” is identical to the version on disc one). The book also talks about how Peggy Lee recorded her own version of the songs, which were released by Decca in 1955. These recordings have been mostly unavailable since then and Decca is now part of Universal, so Disney doesn’t own those recordings. But it would have been great if they could have gotten the distribution rights to include them in this release. However, it seems that the budget for Legacy Collection releases has been limited and we may never see another release as extensive as Mary Poppins was ever again. Hopefully it doesn’t have a detrimental effect on the possibility for the series to continue beyond the originally announced twelve titles.

The next Legacy Collection release is a 3-disc set to celebrate the 60th anniversary of Disneyland. It will be available exclusively at Disneyland starting May 20th with a wide release expected on August 21st. This news already deviates from the announcement in March, which had this set for release on May 4th at both Disneyland and Walt Disney World in addition to disneystore.com. Hopefully the rest of the set doesn’t experience similar delays and barriers for fans hoping to collect them all.