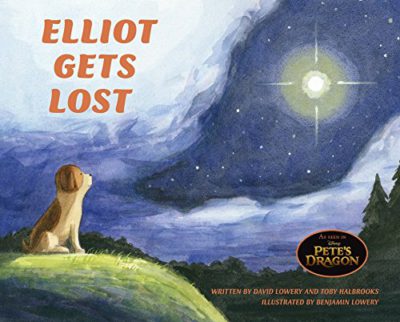 When family movies are released, tie-in books usually re-tell the story or expand on it in some way. Such is the case with Pete’s Dragon, which has both a junior novelization as well as a prequel of sorts called The Lost Years. But Elliot Gets Lost is more than your average tie-in book, since it’s a storybook that is partially featured in the film. When Pete is on the car ride that found him orphaned in the woods, he is reading this particular book.

Elliot Gets Lost is about a puppy who gets lost in the woods. He travels through the forest, asking other animals where he can live. In the end, the animals of the forest help Elliot find his family again.

Pete and his dragon, whom he named Elliot, don’t appear in this book, but it is a similar story. In many ways, Elliot the puppy’s journey is reflective of Pete’s adventure. Like the puppy, Pete loses his family, gets help from a forest friend, and arrives at a similar happy ending.

Written by director/screenwriter David Lowery and his writing partner Toby Halbrooks, this book could have been destined to remain exclusively in the film. Thankfully, Disney Press has published this for children (and adults) to enjoy and cherish, particularly if they feel a deep connection to this new version of Pete’s Dragon. This book is also a family affair, with charming illustrations by Benjamin Lowery.

Elliot Gets Lost can be enjoyed independently from the film Pete’s Dragon, and indeed most preschoolers are a little too young for the film. It tells a cute story about a lost puppy finding his way home with help from friends, but adds some resonance for those who have seen the film. Without a doubt, it’s one of the most creative merchandising opportunities for a film that I’ve seen from Disney in a long time.