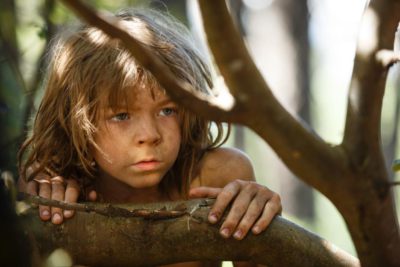 Disney’s updated retelling of Pete’s Dragon takes the concept of a boy named Pete having a dragon, but tells a very different story. Playing Pete this time around is a young actor named Oakes Fegley, who hadn’t seen the original film prior to taking the role. “The only two things that are the same is that there’s a boy named Pete and a dragon named Elliott,” he explains. “I hadn’t actually seen the film before and I didn’t wanna get it all mixed up in my head, so I just hadn’t seen the film until after we were done with principle photography.”

The original Pete’s Dragon will celebrate its 40th anniversary next year, but the filmmakers weren’t setting out to simply update the story. “The gloves were off in terms of how we dealt with that legacy,” explains writer and director David Lowery. “There wasn’t really a fine line, it was a pretty blunt line, which even included the fact that we didn’t have to name the dragon Elliot. We could have called him something else, or not given him a name. But I did like the idea of having a name. Elliot was as good a name as any. I liked the sound of it, so we kept that.” 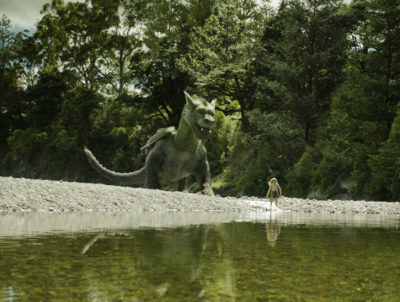 It’s clear that the storytellers were trying to distance themselves from the original film, including the look of the dragon. “I’m a huge pet person, I’m a big cat person,” explains Lowery. “I love my cats to death, and I wish they were twenty-feet tall and I could snuggle with them and that’s really why the dragon’s furry.” Oakes Fegley approached his dragon scenes as he would a pet. “Dogs are the most relatable animal to Elliott I think. He is just like a big green puppy with wings. And he’s very smart and he’s very dog-like, he chases his tail. He makes games up for himself, I mean he’s like a dog.”

Elliot’s performances are one of the film’s highlights, an impressive feat since this dragon doesn’t speak gibberish the way he did in the original. “Subtlety was really our best friend, because a lot could be communicated just by a little tilt of his head.” Lowery remembers the challenges of getting the animated performances just right. “If he turned his head and his eyes were doing a certain thing, it would communicate quite a bit.” 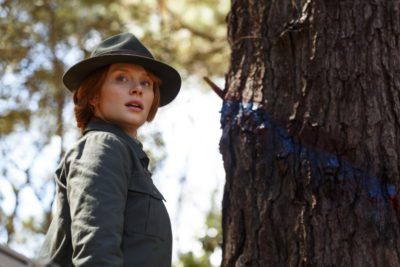 Bryce Dallas Howard plays Grace, the park ranger who discovers Pete alone in the woods. Being a fan of the original film, she was very interested in knowing more about this adaptation. “I heard that it was happening and I was really curious as to what they were going to do, how they were going to adapt it… And then I saw that it was something that apart from the title and the central themes and the character of Pete and Elliot, it was truly a departure.”

For Howard, seeing the final film was a little overwhelming because her imagination of what Elliot would be was different. “It plays tricks a little bit on your memory when you do a scene and there’s nothing there, but you’re imagining something. They showed us versions of what Elliott was gonna be like… so I had kind of a sense in my mind’s eye of what I was looking at. But then when I saw the movie, all of a sudden I see what was really there. But now when I remember back on doing the scene, it’s like as if he was really there doing it. It’s the weirdest thing, it’s like a slight of hand thing that happens in your brain, and suddenly everything that wasn’t real, is real.” 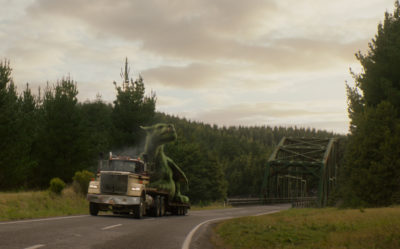 Despite being set in the American Northwest, the 74-day shoot primarily took place in New Zealand. “It’s a utopia,” says Bryce Dallas Howard. “I mean it’s a really magical country.” For Robert Redford, it was a bittersweet experience. “It was such a pleasant shock, that it really had a huge impact on me, and also a profound sadness, because there was a time when America was like that… And I could relate to that, so it made me both happy and sad. I said, ‘Oh, I remember. This is the way we were.'”

Pete’s Dragon is set in an unspecified time period before the existence of cell phones in order to keep Elliot’s secret more plausible. “That was something that was a little easier to do by setting it in the past,” Lowry explains. “But there’s a lot of things that feel better when you set them in the past. “Once upon a time” is used at the beginning of fairy tales for a reason, because you automatically feel that if this happened a long time ago, the fantastical is a little bit more possible. And I love stories that are unrooted in time and that have a timeless feel to them.” 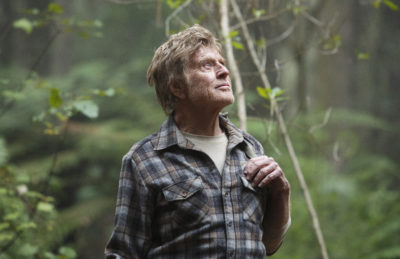 Robert Redford was cast while developing a different project with David Lowery, who realized he was the best man for the part. The role was rewritten just for Redford, who had even considered being a Disney artist in his youth and spent time at the studio as an intermediary, moving cells around. Redford, who co-founded the Sundance Film Festival, recognizes that Pete’s Dragon at times feels like an independent film. “I think that’s just taking full advantage of the medium, you know. To bring reality and fantasy together I think is pretty great. I think this film certainly tries to do that.”

When Pete’s Dragon hits theaters on August 12th, audiences will discover a heartwarming story of a lost boy finding his place in the world. For all it’s differences, this reimagining of the classic film has it’s own charm and mystique. And while you won’t hear “Candle on the Water” or any of the classic songs, you will find that this cast and this story stays with you.

Discover the story behind how Disney’s Pete’s Dragon was reimagined as a non-musical adventure set in the Pacific Northwest (and why the dragon is furry).