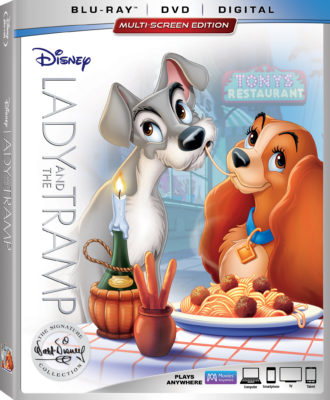 Walt Disney’s classic film Lady and the Tramp returns from the Disney Vault as part of The Walt Disney Signature Collection. The film was last released on Blu-Ray through the Diamond Edition line and was among the first in that series to be sold as a combo pack with a digital copy, although it wasn’t standard and fans had to seek out the gold border version to obtain it. Disney is banking on enough fans having not previously owned a digital copy, as its inclusion and solo digital release are the main advertising push this time around.

Lady and the Tramp tells an original story about a well-to-do Cocker Spaniel named Lady whose life is turned upside down with the arrival of a baby in the house. Kicked out by her Aunt Sarah, Lady meets and falls in love with a streetwise mutt named Tramp. But after a memorable romantic evening, they find themselves torn apart when Lady is caught by the local dog catcher and she learns a little bit about Tramp’s past exploits. Can their love survive the challenges they are about to be put through?

With a cartoony exterior, Lady and the Tramp actually deals with some of the most adult themes of any Disney film. At the same time, it’s wrapped up in such a charming package and presented in such a soft way that it’s not only easy to digest, but one of the most memorable and iconic animated features of all time. There’s an appeal to this film that few have been able to top, though they’ve certainly tried.

Set at the end of the Victorian era and inspired by Walt Disney’s boyhood hometown, Lady and the Tramp is a salute to Americana. Released the same year Disneyland opened, there have always been parallels between this film and Main Street, USA, which also had a similar inspiration. Through fantastic bonus features repeated from previous releases, fans will learn all about this rich Disney history.

Disney movie collectors no doubt already own Lady and the Tramp and the Walt Disney Signature Collection has always been designed to appeal to this market. For this reason, it’s a little surprising to see how light the new bonus content is. Less than 15-minutes of new content will appeal to the adult collector and this time around, there isn’t a previously unreleased Oswald short to sweeten the deal. Instead, they celebrate the “Multi-Screen” viewing options, with three ways to watch the film. Only one of those ways is actually new and unless you need help with lyrics, won’t add much value for the average adult viewer.

There are no bonus features on the DVD.

The Walt Disney Signature Collection release repeats the exact same restoration and transfer as the previous Diamond Edition release. It even opens with the 1990’s blue castle intro before the Buena Vista fanfare, something Disney has removed from all previous Signature Collection releases (including the ones that should have had it, like Beauty and the Beast and The Lion King). The restoration from the previous release was spectacular, so other than correcting the wrong decade’s studio logo, it’s a beautiful presentation that leaves little room for improvement in this format.

On DVD, the film looses some detail and the color palette feels less robust, with brights and darks feeling muted in comparison.

The Blu-Ray features an English 7.1 DTS-HD Master Audio mix. It fills the rear channels with the beautiful score, but nearly all dialogue and sound effects remain in the center speakers. Other audio options include the Restored Original Soundtrack (2.0), plus French and Spanish 5.1 mixes.

The Walt Disney Signature Collection release of Lady and the Tramp comes in a standard Blu-Ray case with disc holders on both sides of the case. The design is in line with the previous Walt-era films in this collection, with a predominantly white color scheme. However, the border is quite different, with an obnoxious “Multi-Screen Edition” banner that overstates what should already be clear – that the film can be watched on Blu-Ray, DVD, and Digital. The included slipcover has a mostly matte finish, with glossy embossed elements and a foil border. Inserts include an ad for Disney Movie Club and a digital copy code for Movies Anywhere, which can also be redeemed for 150 points.

Both discs open with ads for Incredibles 2, Coco, and an anti-smoking PSA starring Cruella DeVil. The menu features animator line drawings that transform into scenes from the film set to score. Selecting “Sneak Peeks” from the menu plays additional ads for Disney Movie Club, Disney Now, and Disneynature Dolphins.

While the digital copy includes nearly all of the bonus features from the Diamond Edition plus the new ones, the Walt Disney Signature Collection version of Lady and the Tramp‘s Blu-Ray disc is a downgrade. It swaps hours of worthwhile bonus features for just a few new ones with no real explanation as to why. Those who own the Diamond Edition are given little reason to purchase it again and if your main goal is to obtain it digitally, I recommend bypassing the physical release altogether.