Today, Toy Story Land finally debuts at Disney’s Hollywood Studios, marking the end of Pixar’s huge June. Between the release of Incredibles 2 and the opening of Pixar Pier and Toy Story Land, Pixar has truly dominated the Disney landscape this past month. Over the past few months, we’ve gone in-depth on a few Pixar-inspired attractions, and in this article, we’ll close out our looks with one of the greatest Disney attractions ever made and easily the best Pixar attraction, Toy Story Midway Mania. 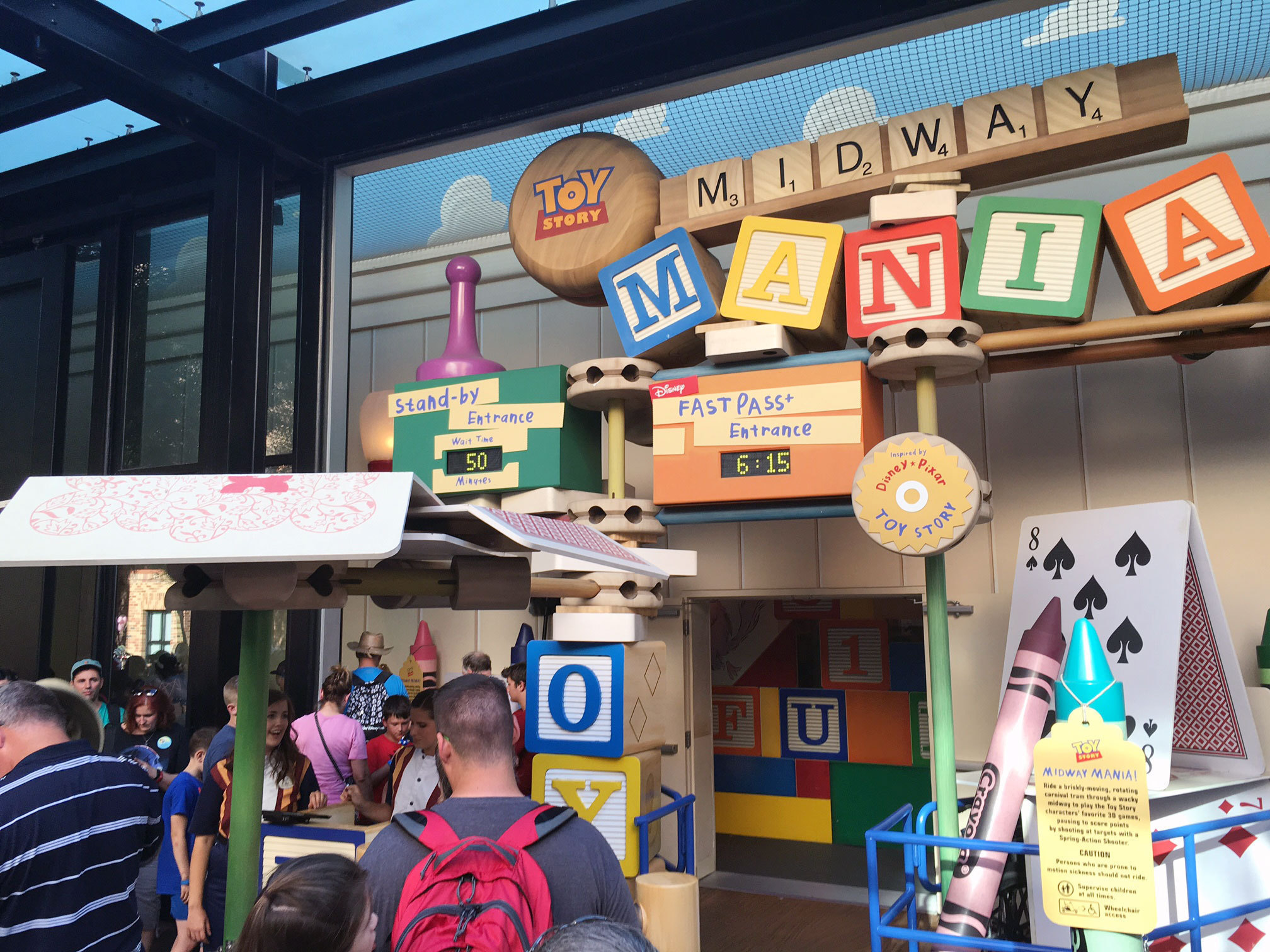 Originally debuting on May 31st, 2008 at Disney’s Hollywood Studios and replacing Who Wants to be a Millionaire – Play It!, Toy Story Mania (the nomenclature for the attraction varies, so I will switch between the official title of Toy Story Midway Mania! and the colloquial term of Toy Story Mania) was an instant success. As the only major attraction in Pixar Place, the attraction helped to change the landscape of the park because it was a new way to experience the films. Whereas before, most of the attractions focused on film and television production, this attraction allowed you to enter a world with characters from one of the most beloved film franchises of all-time. Not only that but you could also interact with the attraction by playing the mini-games with characters commenting on your abilities.

In case you’ve never been able to ride Toy Story Mania, it’s important to note it is a 4-D interactive dark ride where you shoot target across five different boardwalk-style games. Andy’s toys managed to find this set of games in his room, and you’ve been invited to join the fun.

Taking its cue from another Toy Story-themed shooting attraction, Buzz Lightyear Astro Blasters, Toy Story Mania takes the concept to a-whole-nother level by giving guests five different games to experience throughout. Though the targets do appear in the same places every time, having these unique games keeps the attraction fresh. 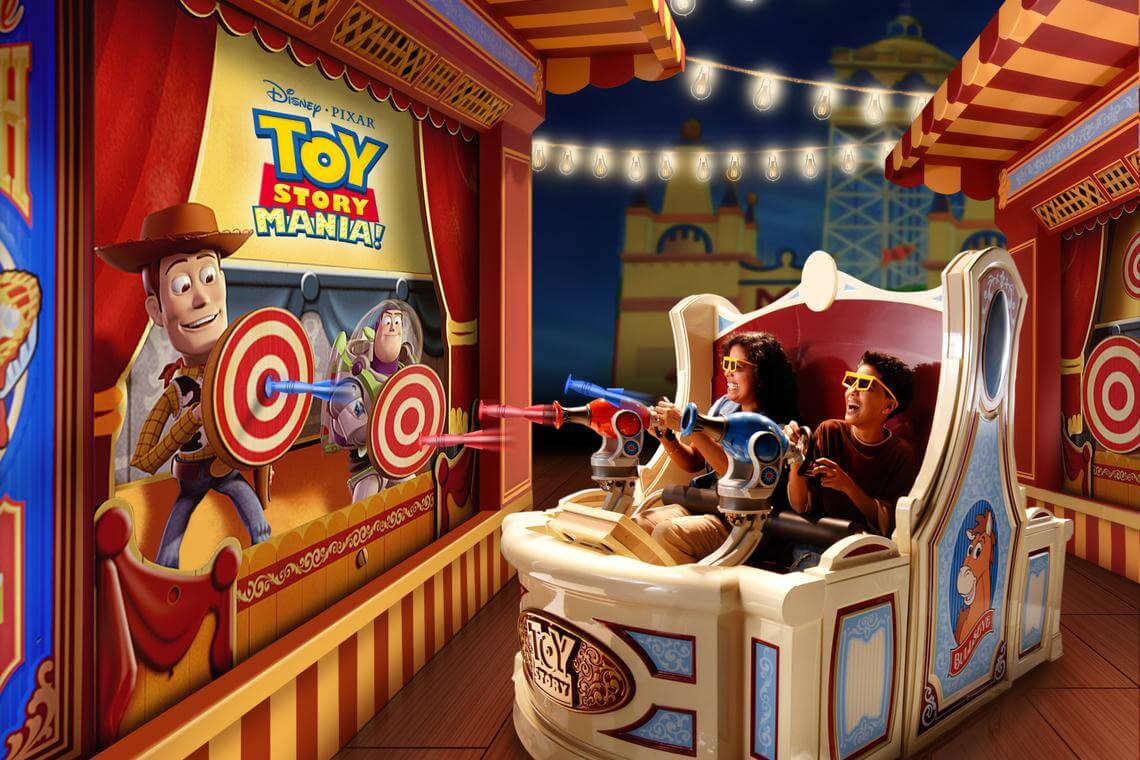 Overall, the ride system, especially computing power-wise, is one of the most advanced of any Disney attraction ever, and for $80 million, it really should be. Interestingly enough, the ride system is advanced enough that your vehicle doesn’t need to stop in the same spot every single time. It is able to calibrate your gun with the screen no matter where you stop.

Speaking of that idea, it is amazing how truly seamless this attraction is in regards to shooting. Even though you are firing at a virtual screen the entire time, it really feels like you are hitting real world targets. There is virtually no lag time between pulling your drawstring and your projectile’s appearance on the screen. Whoever managed to make that work deserves a huge raise pronto. 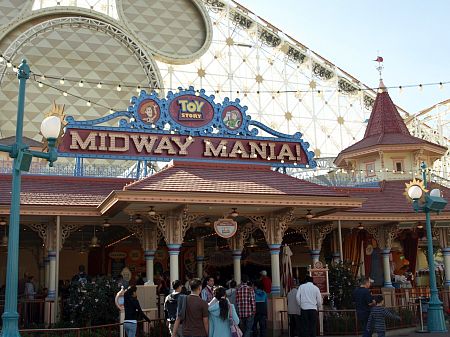 According to Imagineering, Toy Story Midway Mania! was the first attraction to be developed simultaneously for two different Disney parks. Though it was slightly behind Hollywood Studios, Disney California Adventure’s version opened on June 17th, 2008. Toy Story Mania was the beginning of the park’s major transformation, especially the complete overhaul of Paradise Pier (though that only lasted a few years before part of it became Pixar Pier just this past week).

The two versions are virtually identical, with the queue being the only major differentiating factor.

Both of these queues featured an Audio-Animatronic Mr. Potato Head. He is one of the most advanced Animatronics that Imagineering had ever created, with the ability to interact with guests and recognize specific traits about them. He was also the first AA to ever move his lips, and be able to remove his ear. Overall, Mr. Potato Head was such a technical marvel, but unfortunately it made him super temperamental, and he was removed from Hollywood Studios and hardly runs at California Adventure.

One of the other things that makes the attraction so special is its ability to be easily updated. With the release of Toy Story 3, one of the original mini-games, Bo Peep’s Baaa-loon Pop, was replaced by Rex and Trixie’s Dino Darts (especially fitting due to Bo’s absence in the film). After this change, fans everywhere were expecting a new game every few years, but so far we’ve still only had the one change. Hopefully, we’ll see some changes with Toy Story 4 hitting theaters next summer.

Toy Story Mania did manage to make one more appearance on the American Waterfront of Tokyo DisneySea, beginning on July 9th, 2012. Again, the only change in this version is the queue, and I have to say, I really am fond of the giant Woody head that you have to walk through to enter the queue. Over the years, the attraction has remained relatively constant in California and Tokyo, outside of the additional game. However, there have been a few changes to the Florida version over the years. In October 2014, they attempted to use a virtual queue for a few days, but it didn’t really stick. (But with the virtual queue’s success at Universal Studios, I expect we’ll see it reappear at Disney Parks sooner than later, most likely in Galaxy’s Edge.)

Additionally, the attraction added a third track in 2016 to help prepare for Toy Story Land and keep the attraction from the three-hour lines it frequently incurred. I had a chance to visit this third track that took you to Andy’s room when I visited recently, and it feels really natural. They did a fantastic job just plopping in a third track, and making it fit well into the aesthetic. 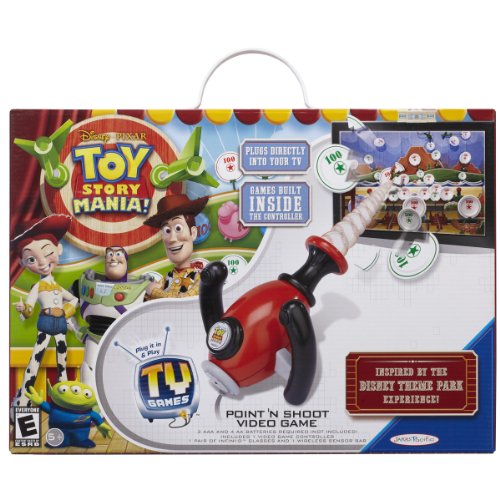 With today’s opening of Toy Story Land at Disney’s Hollywood Studios, Toy Story Mania is getting one more change with a brand-new entrance. They are moving the entrance of the attraction to a completely different side, and I am super impressed. I cannot wait to get there later this summer and see how they pulled it off.

Thank you for joining me on this look at Pixar attractions over the past few weeks, and be sure to visit Hollywood Studios and California Adventure to see these new offerings.