Leaving well enough alone hasn’t been in the Disney playbook for quite some time, but in recent years the trend to reimagine all of the company’s best-remembered efforts has undeniably reached a fever pitch. Hence the live-action remake of Dumbo, directed by contemporary filmmaking legend Tim Burton, and set to hit theaters this week. But what is the creative appeal for updating a Disney property that arguably already reached its zenith more than 75 years ago?

At the recent Dumbo press junket in Southern California, the new film’s writer, producers, production designer, and costume designer sat down to discuss their own approaches to expanding upon this well-trod material, and their own personal reasons for deciding to come aboard the project. 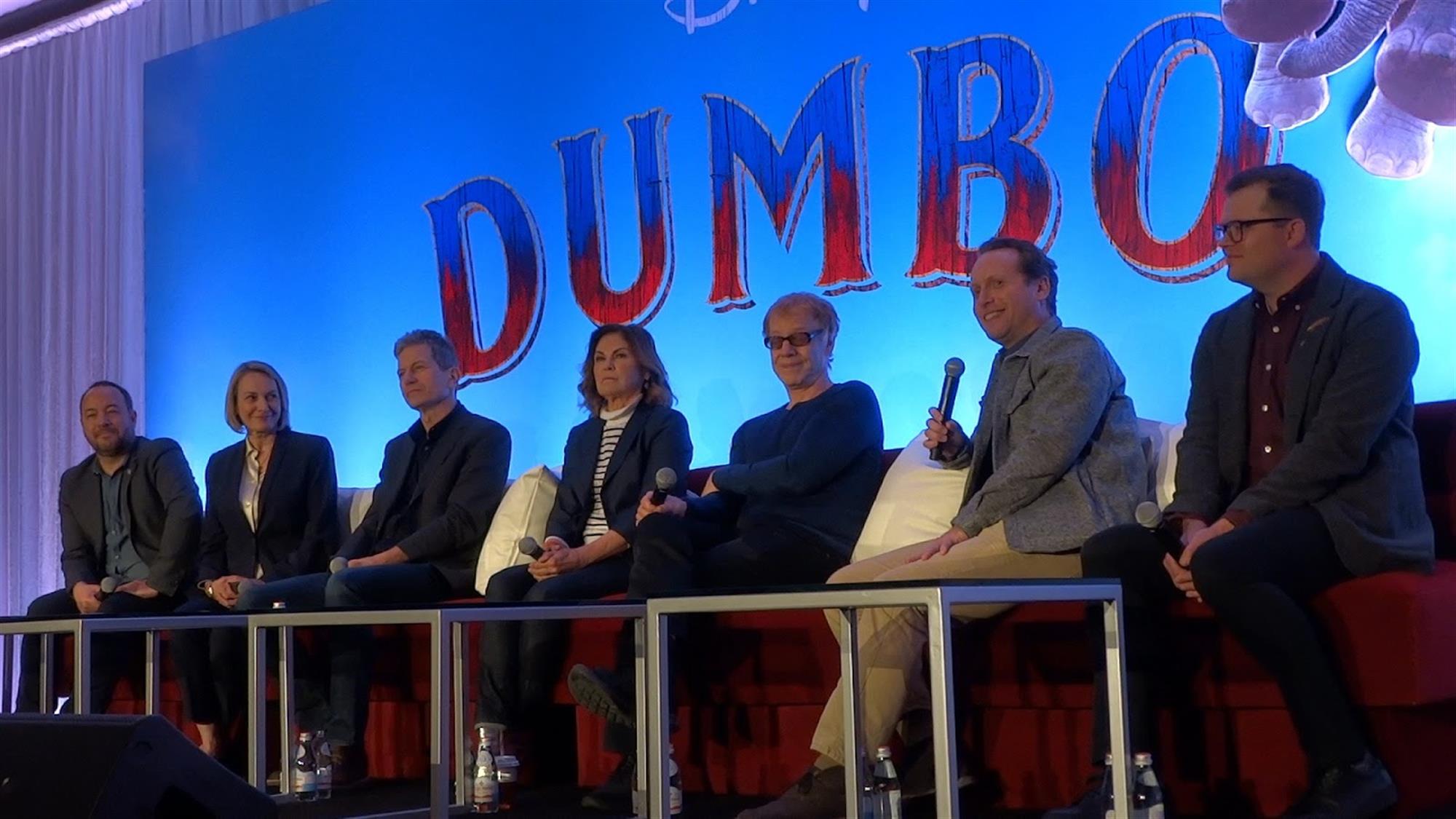 Screenwriter Ehren Kruger (The Ring) set the tone by explaining just what the creative appeal of Dumbo was for someone who is mostly known for having scripted thrillers, action and horror films in the past. “I wanted to be a part of this movie for I think the same reasons that I hope an audience wants to see the movie. For me, [it’s] a very personal experience of wish fulfillment. Dumbo’s not just a Disney character, he’s a mythological character.”

“I wish he were real, and I wish I could have been in the audience at that circus, in the golden age of the circus, and observe his story. And then to take the next step, not just observe his story but imagine what it’s like to be Dumbo. And that leads you to a place where you say, ‘Well, what would Dumbo want?’ and ‘Is the end of the 1941 film truly a satisfying end of that story for Dumbo?’ So that just organically led to expanding the story past where the animated film ends.”

“Why is Dumbo the universal character, and a universally loved character? Because everyone sees themselves in the story of a character who has self-doubt, who has flaws, who is defined as one thing by someone else and has this mouse inside them telling them, ‘Maybe you’re more than that,’ or ‘Maybe that negative is a positive.’”

Kurger continued by detailing how he relates to the group of circus performers he helped create for the new film. “We worked very hard to create a menagerie of human characters, a circus family around Dumbo who all in some way were wrestling with uncertainty about themselves and their place in the world, and in fact the circus’s place in the world, so that Dumbo could be an inspiration for each one of them like he is to audiences worldwide.” Producer Derek Frey (Miss Peregrine’s Home for Peculiar Children) further explained the decision to reimagine Dumbo. “Well, from Tim’s perspective, when we were handed the screenplay from Ehren, it just seemed like a story that could be expanded upon. The original is 63 minutes, and Tim was aware that the technology had reached the point where you could successfully render an elephant into a live-action environment.”

“It just seemed like, for Tim, he’s obviously done some reimaginings in the past. Every film that he takes on, it’s not a simple decision, and he knows that Disney’s been going back into their catalogue of films. But Dumbo is one of the original outsiders, in a way, and Tim’s films are populated with outsider characters, so I think for Tim it was the combination of knowing that the technology was there to render this character, and that pulled upon all of his strengths as an animator, with his Disney background.” 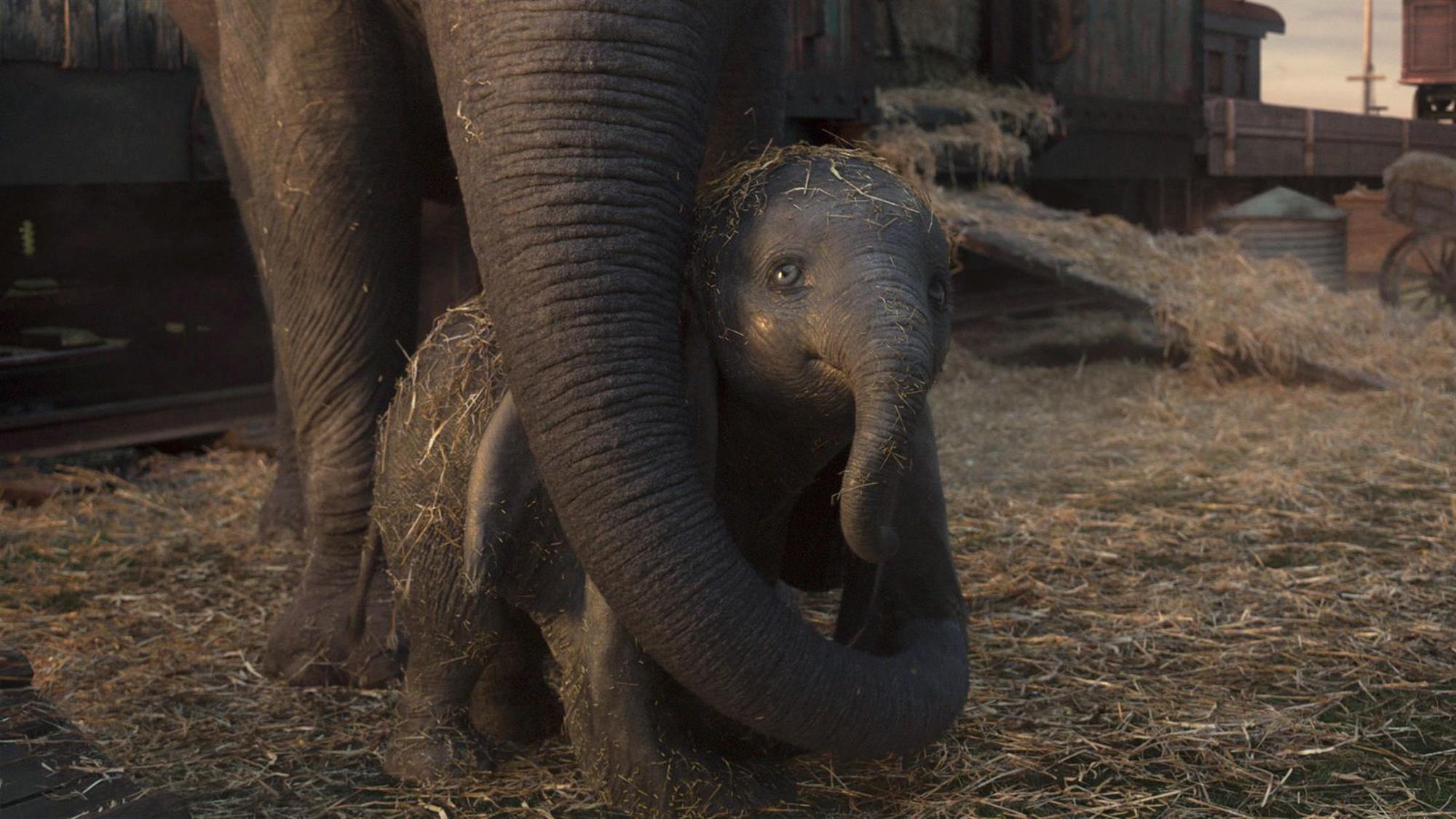 “It’s almost like Dumbo is a personification of himself, in a way, which is interesting. But in terms of the time, so much time has gone by since the original, and it’s a simple story, it’s a beautiful story. And I think a lot of the themes in the story that Ehren created, they’re universal things. It’s about family, it’s about believing in yourself, it’s about overcoming judgment, and people looking at you in a certain way.”

“Dumbo’s kind of a bullied character, I know that’s something that we’re dealing with socially right now, and to place it back in a [different] time period and have this heightened reality, I think we can learn a lot now by looking back. It’s just such a beautiful world that Tim’s created, and Rick [Heinrichs] created, and Colleen [Atwood]…” 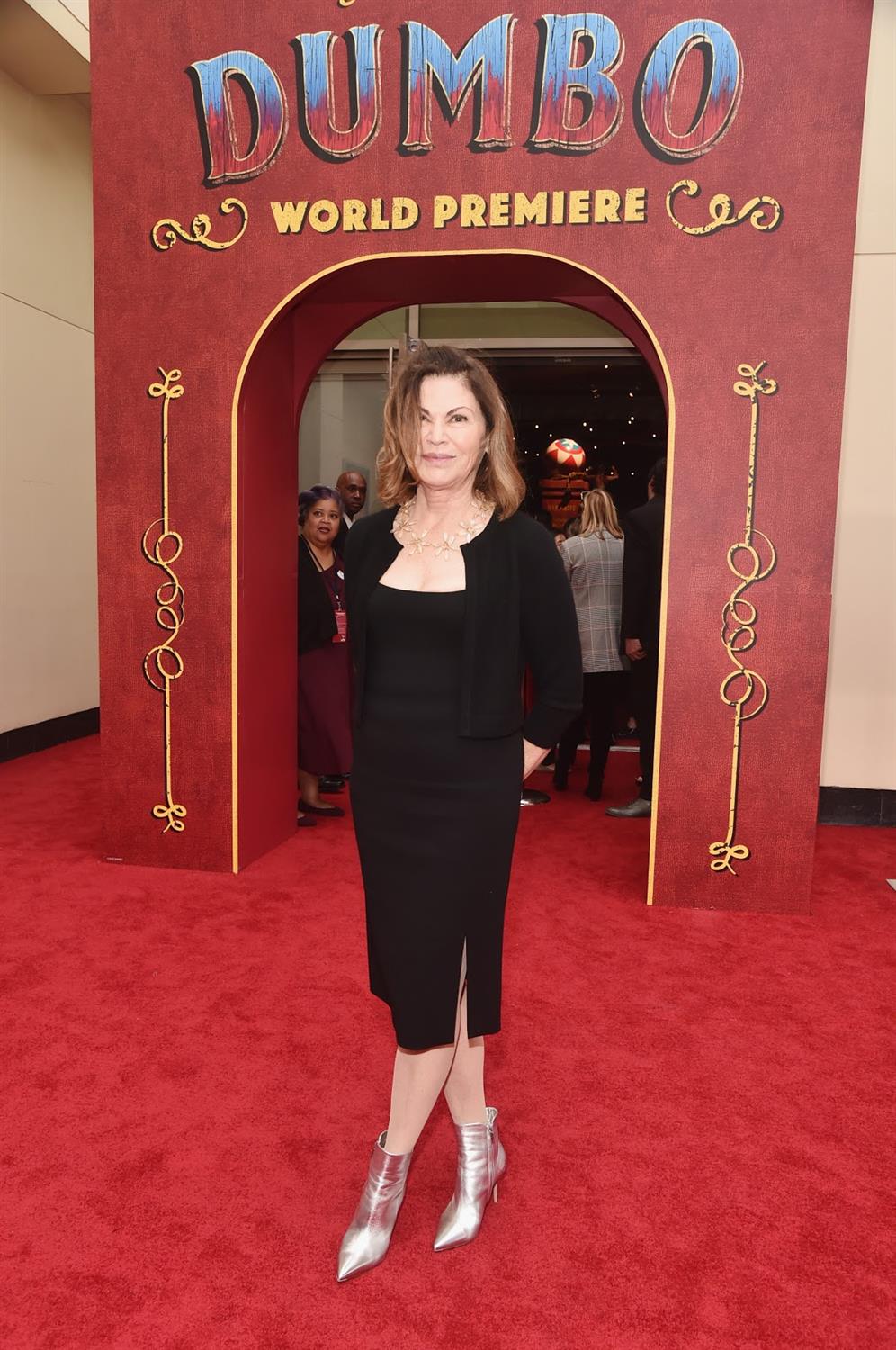 Speaking of Colleen Atwood, the film’s acclaimed costume designer who is also famous for having worked with Tim Burton on movies like Sweeney Todd: The Demon Barber of Fleet Street and Sleepy Hollow, reflected on her approach to Dumbo. “I think the idea of creating a world on a performance level, and on a period level together, is always an interesting challenge. It sort of bridges between fantasy and reality, and the challenge of combining five circuses, how they would all look, how the people in them would look, was a huge challenge. And then just managing five hundred people a day for months on end and things like that were a different kind of challenge.”

“The one thing that’s really amazing about this movie is that so much of it is real in the room: the sets for the big circus parade, and when you’re in the room with all of that going on, you realize you’re in a very magical, very rare place that you might not ever be in again in your life because movies are changing so quickly and the whole digital world is changing so quickly. But you really felt like you were in the moment in an old time movie, when you were shooting it, which made it a really special experience for me. Forget the challenge, it was just the experience that was great.” 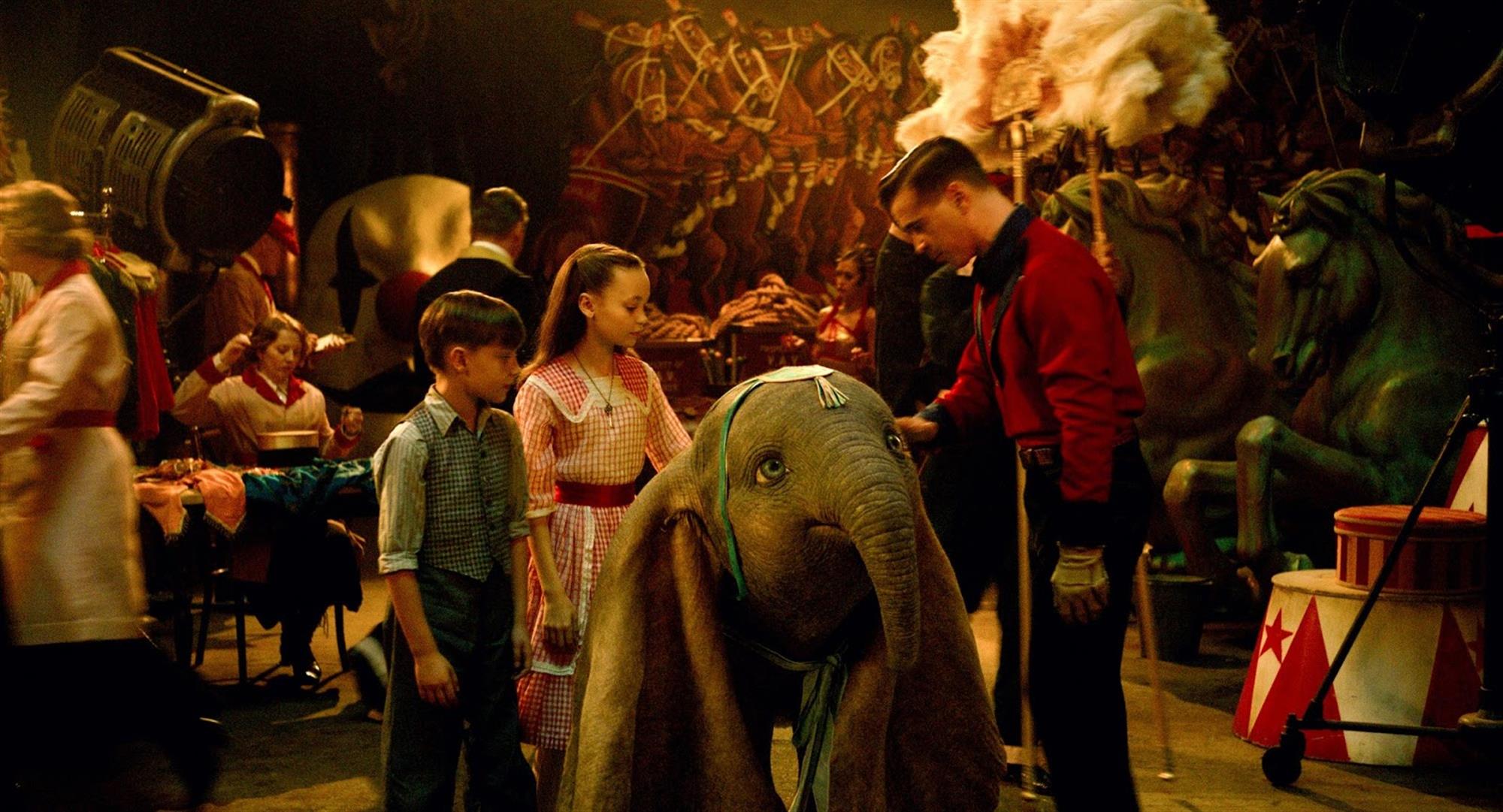 Much of the craft going into creating the look of those sets was the responsibility of production designer Rick Heinrichs (Star Wars: The Last Jedi), who commented fondly on his working relationship with Burton. “Every movie I’ve worked with Tim on, and I’ve known Tim for almost forty years, has been an adventure unto itself. There is a shared visual shorthand, but I’m sure that all of his collaborators would say the same.”

“The exciting thing about working with Tim is in many respects you dig deep into the history, the period, and all of the things one normally does to bring all the toys to play with on the table. And then Tim sweeps all that aside, and you sort of put it back together as a Tim Burton film. It’s always a blank canvas that you start with. It feels dangerous and exciting and challenging, and Dumbo is certainly no different from any other time.”

Producer Katterli Frauenfelder (2001’s Planet of the Apes) echoed that sentiment and followed through on how Burton’s influence helped craft the look of the film from its early stages. “It started with Tim’s sketches, which everything starts from, and a lot of work. Everybody was involved, Rick, [visual effects supervisor] Richard Stammers, but basically it was Tim’s eye that kept evolving towards how he wanted to see Dumbo, and he didn’t want a photoreal character, but he wanted something heightened.”

“The work on the skin and the eyes and the movements and the flying, it was just his eye and the collaborations with the people he worked with to create Dumbo that pushed forward continuously. It’s basically his vision of what Dumbo should be in the world that Rick and Colleen created, and how he fits in there with a live-action family and the circus, and can bring out all the emotions that Dumbo should.”

Producer Justin Springer (TRON: Legacy) concluded by expressing his affection for Walt Disney’s original animated classic and his desire to build upon that legacy with respect. “Ehren and I had worked on another project at Disney, we really enjoyed that process, and we were talking about other things we might want to work on together. Ehren asked me about Dumbo. He said it was his favorite movie growing up as a kid, and the first one that he showed his kids.”

“It was a movie that I remember seeing. I saw it at home, and I have a very vivid picture of the first time as a young kid. We just started talking about ‘Why Dumbo?’ and ‘Why now?’ and what might be interesting. Ehren had an early version of the story in mind that he and I started talking through, and I went to the studio and said ‘Ehren’s this writer that we all know and love, and he’s really excited about this title. Would you guys consider it? Would you be willing to hear a story from us?’ And they said yes, but it came from a very organic place, which I think really speaks to a development process where you have a writer who’s very passionate about it.”

“Ehren then wrote a really beautiful script. An early version of that script, before many people got their hands on it, went to Tim, and he brought he own passion and enthusiasm for that original title to what Ehren had done. And so all of it came from this really beautiful place of people who really loved the original film and wanted to honor that original film, and find ways to carry that story forward and bring contemporary themes and ideas to it as well. But [we] really loved the original film. It didn’t feel like an assignment or something somebody else wanted us to do. It came from this really natural place.”