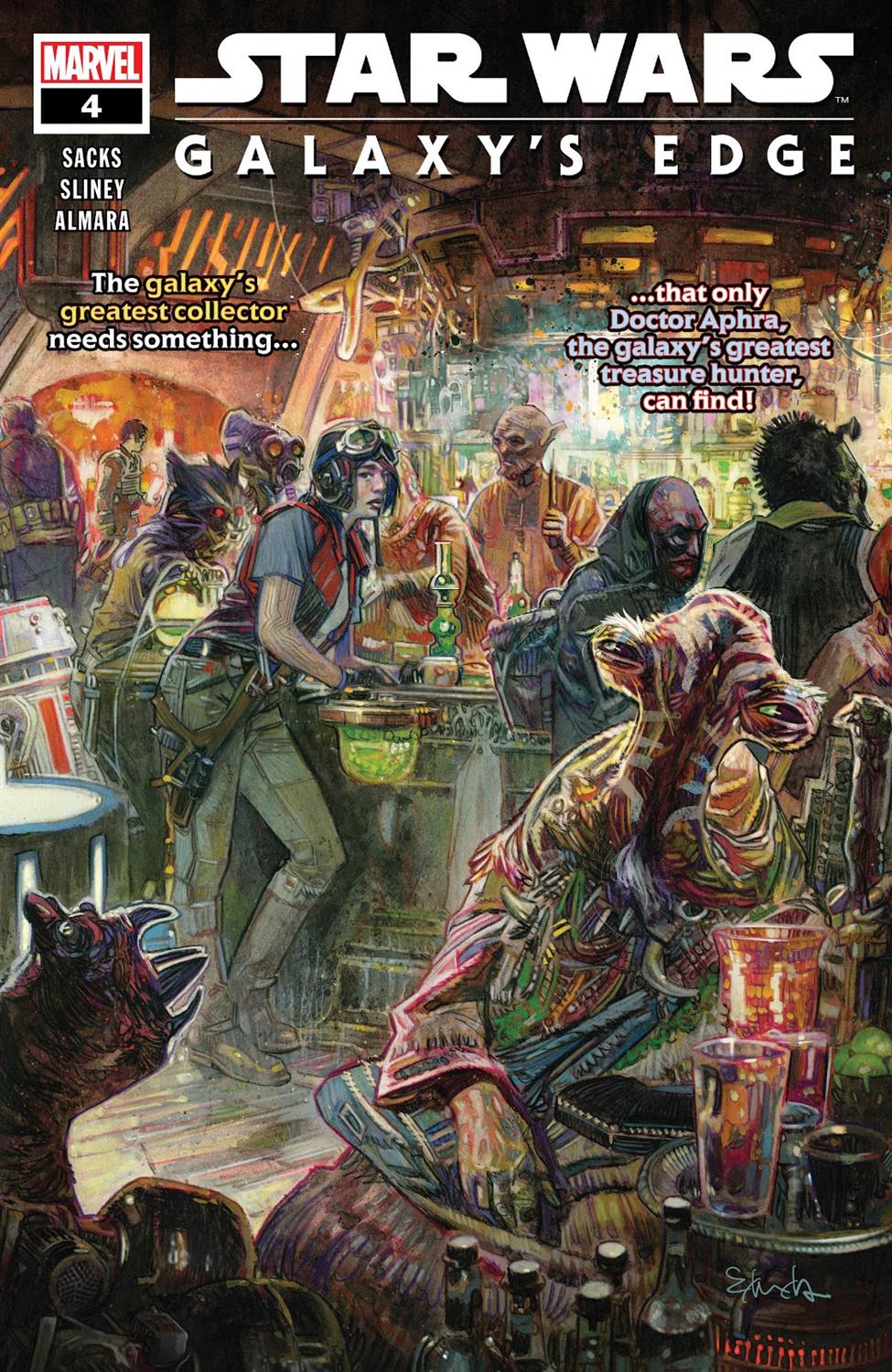 Anyone who’s spent time in the Dok-Ondar’s Den of Antiquities gift shop at Star Wars: Galaxy’s Edge on either coast knows it’s jam-packed with Star Wars Easter Eggs from across more than four decades of stories set in a Galaxy Far, Far Away. And over five issues of Marvel Comics’ Star Wars: Galaxy’s Edge comic book series, we learned a little bit more about that shop’s proprietor, the Ithorian Dok-Ondar, and how he came by some of the pieces in his collection.

The final two issues in this Star Wars: Galaxy’s Edge miniseries were released in July and August, with the last one hitting comic shops today, and saw Dok-Ondar teaming up with the Weequay pirate Hondo Ohnaka and human archaeologist Doctor Aphra to reassemble the mysterious Sith artifact known as the Sword of Khashyun, with the blade currently in the possession of outlaw Kendoh Voss and her gang. 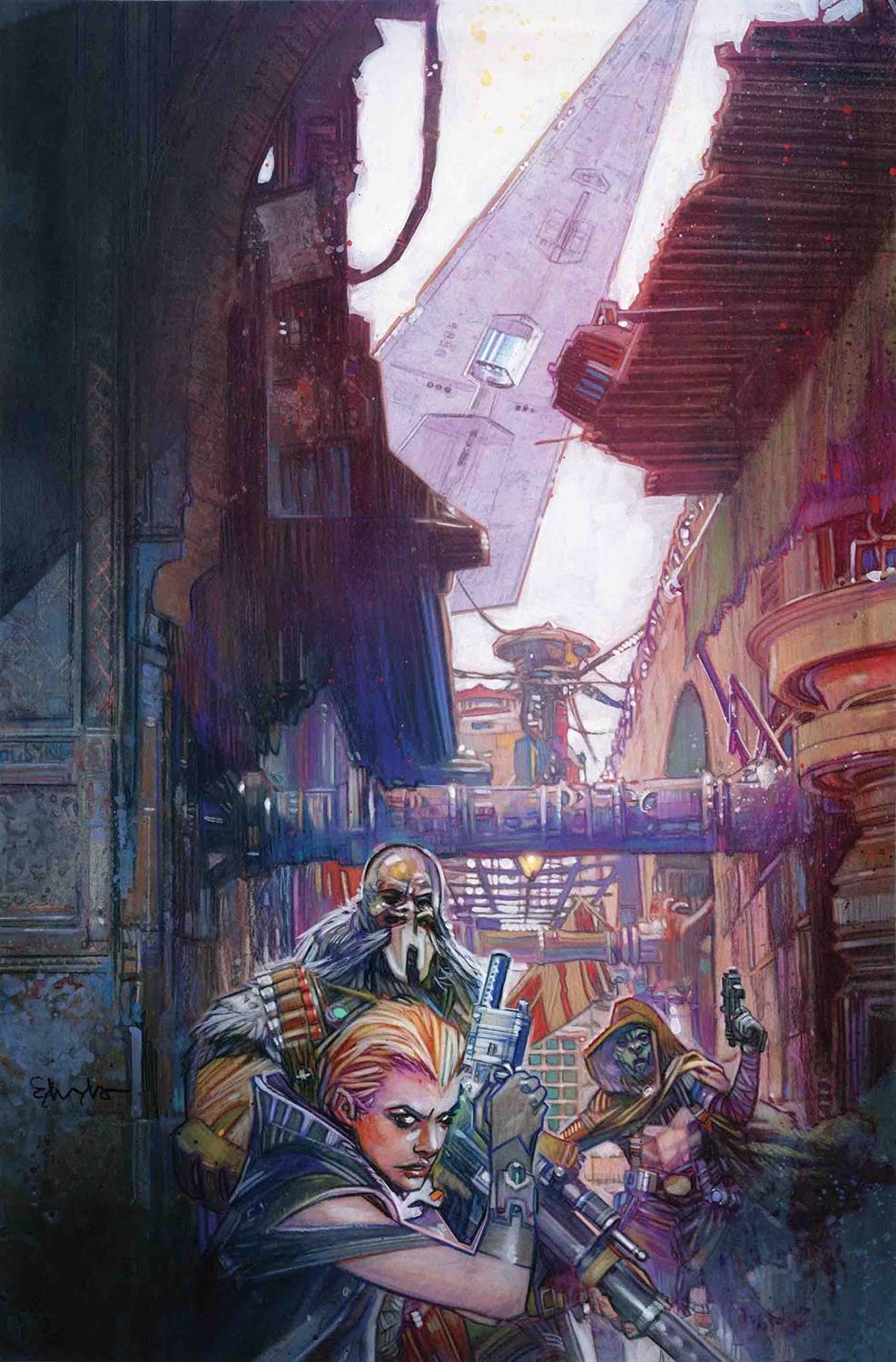 In the current-day time period of the book (set between Episodes VIII and IX of the larger Star Wars saga), we follow the notorious Red Fury 709th Legion of First Order stormtroopers as they continue their attempt to track down the hidden Resistance Base on Batuu– this story also follows the events of the Star Wars: Galaxy’s Edge – Black Spire novel. Their task leads them to Dok-Ondar’s, where Kendoh’s gang, Hondo, and Dok have collided in conflict over the valuable sword.

Via flashbacks, we learn how Dok-Ondar partnered with Doctor Aphra and her diabolical droids Triple-Zero and BT-1 and traveled to the Sith homeworld of Moraband to find the sword hidden in an ancient, booby-trap-ridden temple. Aphra comes across as unusually evil in her portrayal here, as in her own ongoing Marvel Comics title– and in the Darth Vader series where she made her debut– she tends to be more of a chaotic-neutral bystander making her way through the galaxy. It seems a little out of character that she would threaten Dok in the way she does, even after Dok dismantles Triple-Zero for trying to assassinate him (Aphra and Trip rarely have each other’s backs). 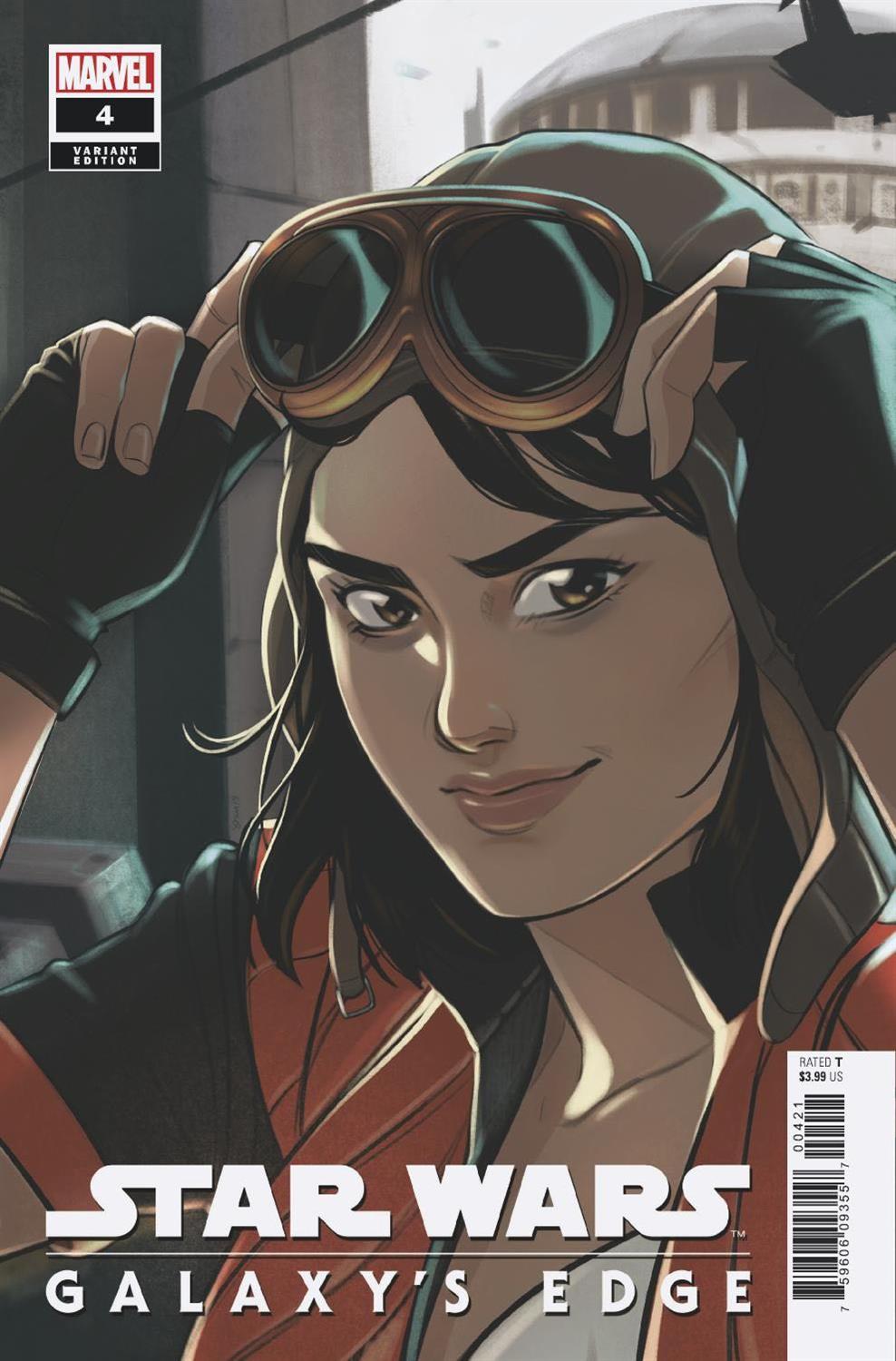 Still, issues #4 and #5 of Star Wars: Galaxy’s Edge make for a fun adventure and a somewhat satisfying conclusion to the miniseries as a whole. I loved seeing Dok-Ondar’s IG-series assassin droid spring into action as soon as it was clear his master was in danger, and the payoff involving the baby Sarlacc (as set up back in issue #1) was well worth the wait. I do wish that we had learned a little bit more about Dok’s parents’ relationship with the Sword of Khashyun, but I suppose writer Ethan Sacks needed to leave a loose end somewhere for his story to be continued later on.

Speaking of which, I want to use this opportunity to say I really hope this first big push of official canon stories (including Black Spire, A Crash of Fate, Pirate’s Price, Thrawn – Alliances, and more) set on the planet Batuu are followed up with more as the years go by. It would be a real shame to set all these characters up just to launch the lands opening at Disneyland and Walt Disney World and then forget about them. It would be great to see the title character in The Mandalorian visit Black Spire Outpost, or if Vi Moradi popped up in Star Wars: The Rise of Skywalker when it comes out this December. Star Wars: Galaxy’s Edge may take place in the Outer Rim, but it’s interesting that Batuu has become a nexus point for the ancillary Star Wars narrative this year. I know that has a lot to do with marketing and corporate synergy, but I’ve also become a great appreciator of the interconnectedness of the current Star Wars canon. If the creative minds behind these tales can keep the momentum going (and also manage not to spell their own planets’ names wrong, as so happened in Galaxy’s Edge issue #5), I think we can continue to look forward to impressive world-building and inventive storytelling from Lucasfilm Publishing for years to come. 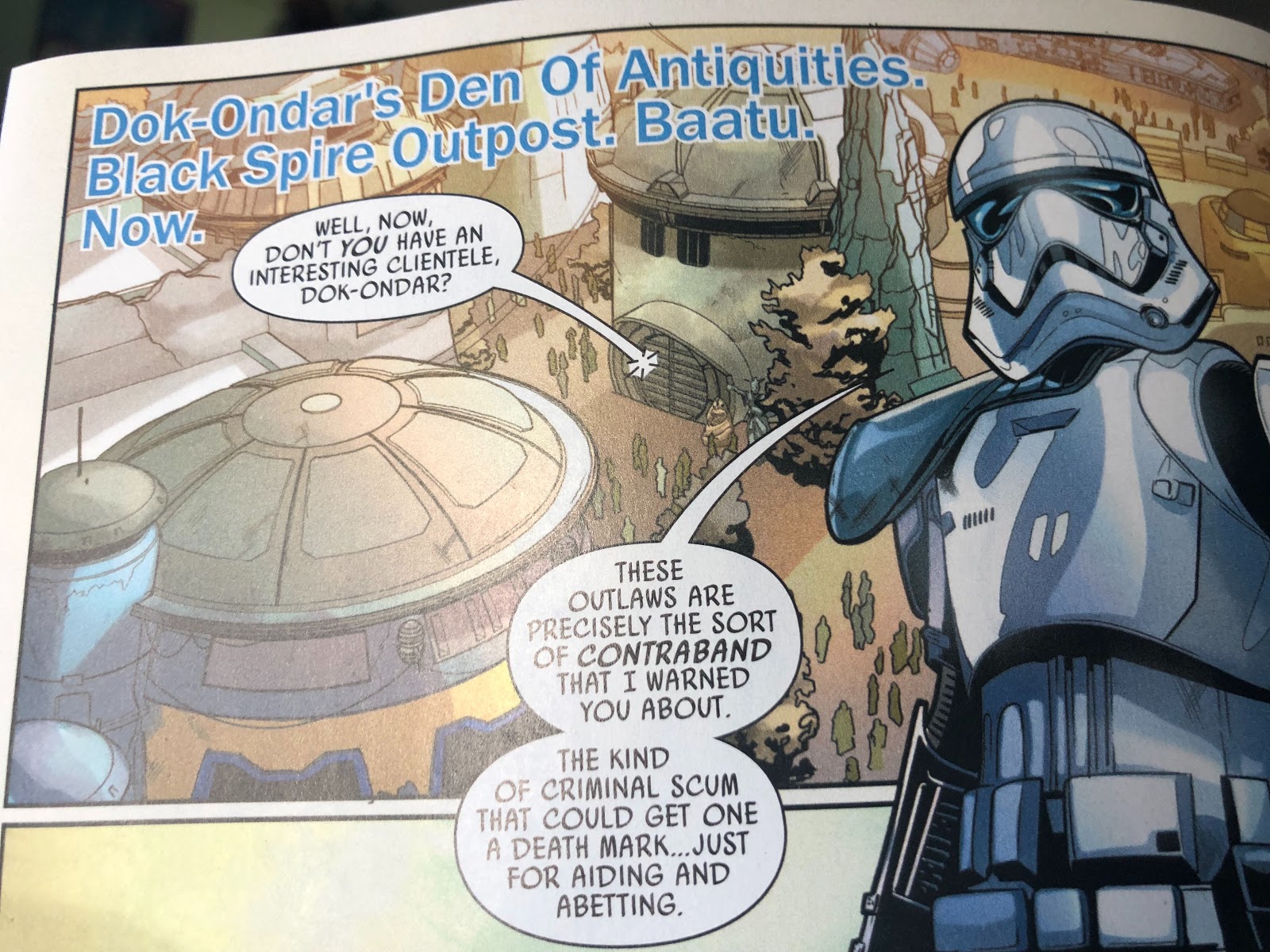