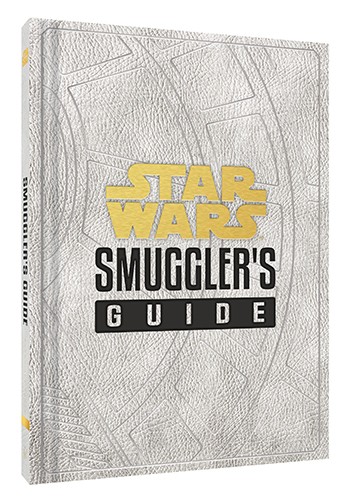 As I’ve spoken about before on this website, one of the most interesting elements of current-day (read: Disney-owned) Star Wars canon is how interconnected everything is. With the myriad of ancillary materials constantly hitting shelves in the form of novels, comics, video games, and other media, it’s great that fans can rest easy knowing the Lucasfilm Story Group is out there making sure everything lines up and that we’ll actually see a proper amount of continuity across multiple platforms.

That’s what makes something like the book Star Wars: Smuggler’s Guide so interesting. While not necessarily straightforward narrative in the strictest sense of the term, it does tell a compelling story by utilizing the built-in interwoven nature of the Star Wars galaxy, its characters, and locations. 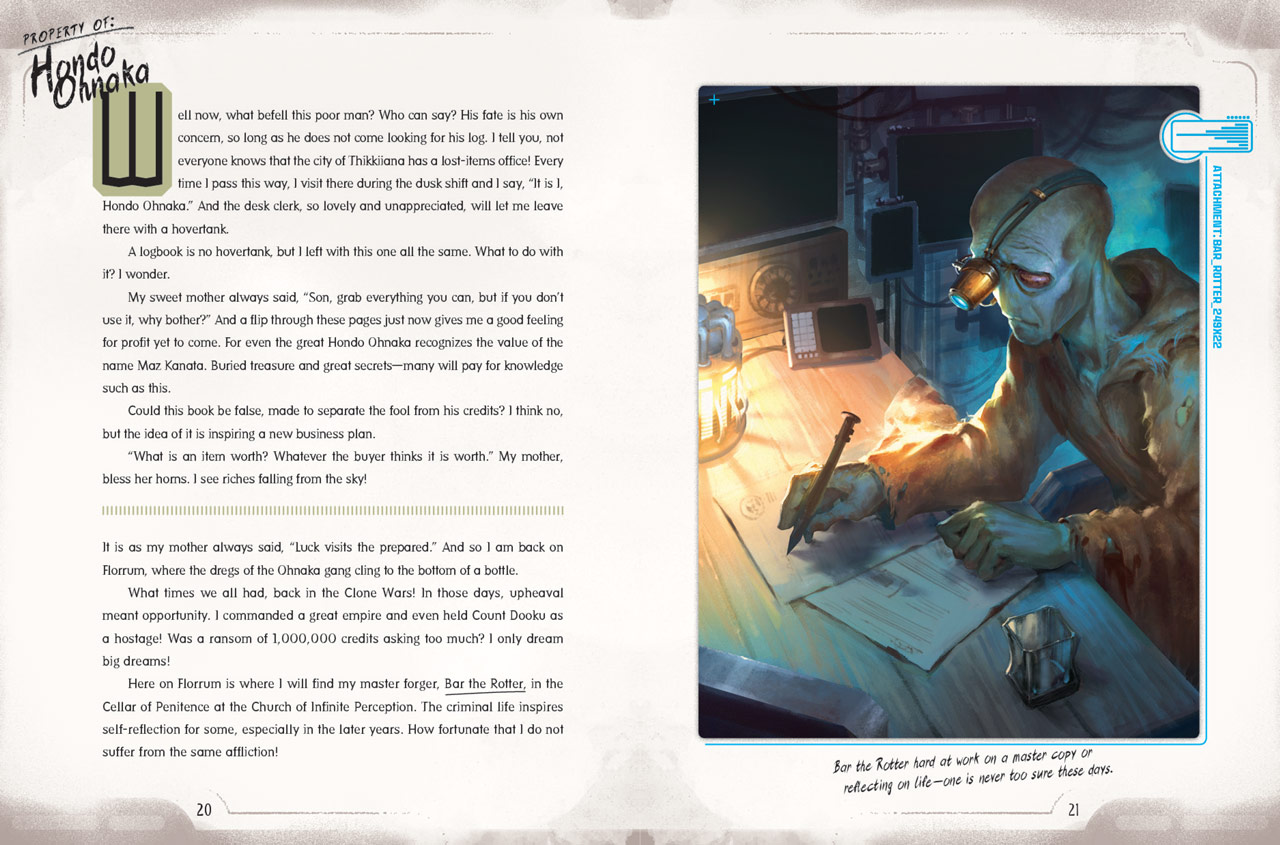 Star Wars: Smuggler’s Guide (the standard edition hitting stores this week) is a simplified, more affordable version of the Deluxe edition which first became available in the fall of 2018, without all the boxed-set pack-ins such as “a pilot’s license, starship paperwork, Lando’s coat check claim ticket, etc.” as per author Daniel Wallace on Twitter. Previously, Wallace has also penned Star Wars: The Jedi Path, Star Wars: Book of Sith, Star Wars: The Bounty Hunter Code, and Star Wars: Imperial Handbook as in-universe guidebooks from A Galaxy Far, Far Away.

While I haven’t made my way through those other reference manuals, I definitely plan to go back and check them out, as I found Smuggler’s Guide to be a surprisingly innovative way to weave a tale in this very familiar universe. Essentially, the way this book works is it starts out as a journal slash treasure map being kept by pirate queen Maz Kanata, until it falls into the possession of other ne’er-do-wells across the galaxy, each making his or her own entries as the book changes hands. 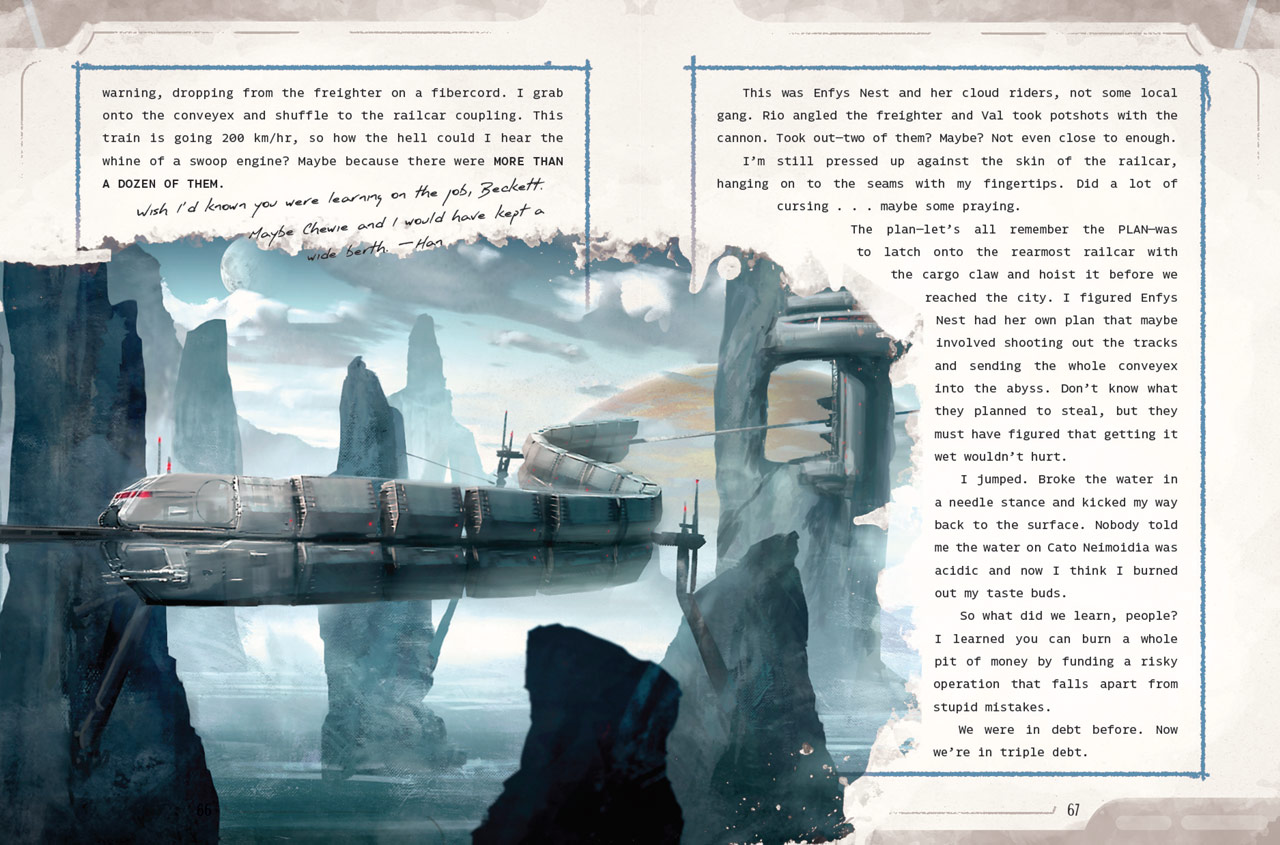 From the early days of the Galactic Empire through the time of the Rebel Alliance and through to the appearance of the First Order, the reader tracks the journal through dozens of owners– from Dexter Jettster to Hondo Ohnaka to Dryden Vos to Lando Calrissian and even Han Solo– as we get to know the seedy underbelly of the Outer Rim first-hand via smugglers, pirates, assassins, slavers, and gamblers. It’s a very different (and very welcome) method of Star Wars storytelling, and it allows for a variety of styles and formats that wouldn’t be possible with more traditional prose.

But is there more to Maz’s journal than its average possessor has calculated? The Master Codebreaker (played in a cameo appearance by actor Justin Theroux in Star Wars: The Last Jedi) seems to think so, as he scrawls his notes in the margins, putting together clues that others have missed. In fact, many of the book’s fictional owners have gone back and left hand-written messages between lines of text whenever they had a stray thought to share. It’s another inventive technique by which Wallace draws his audience into the fleshed-out world of Star Wars. 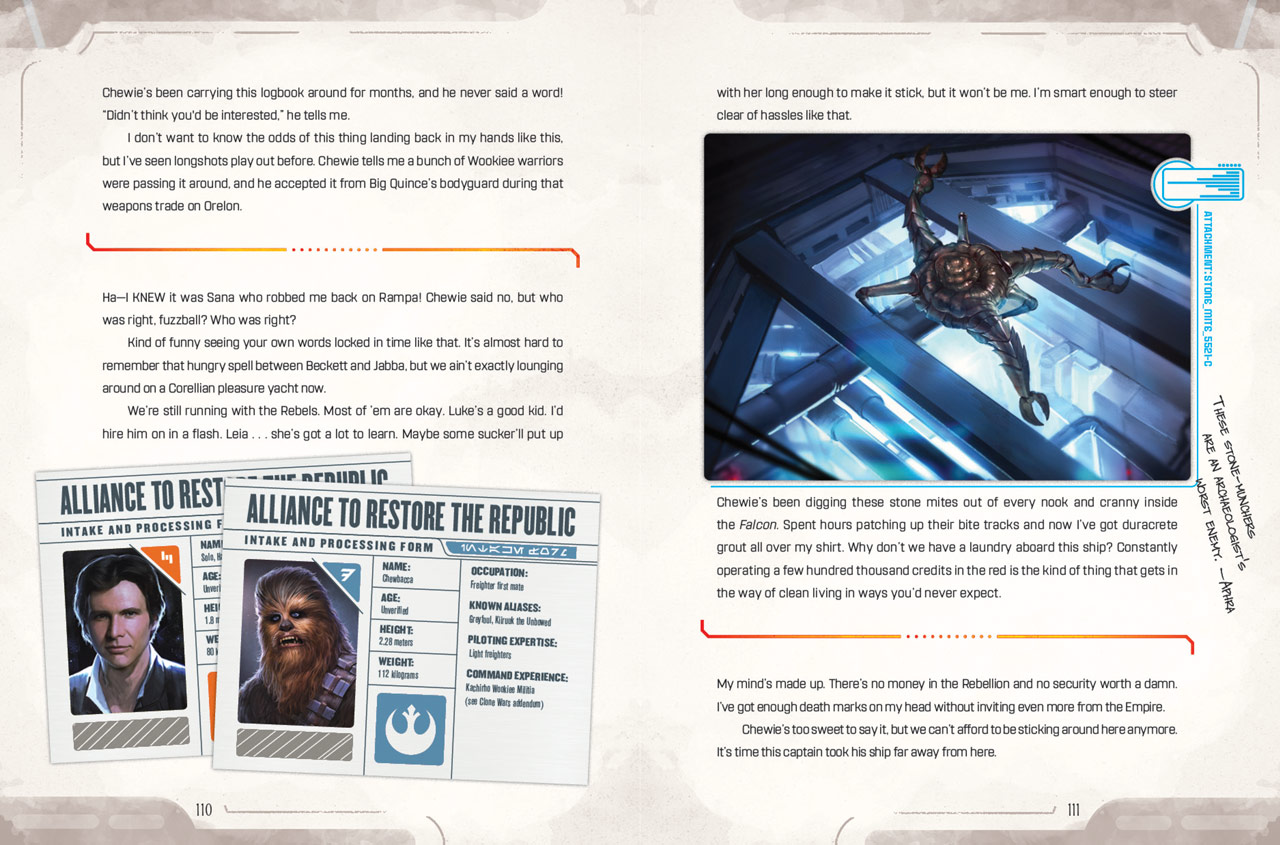 Illustrations by Adrian Rodriguez, Thailand’s Studio HIVE, and Javier Charro further help sell the immersion offered by Star Wars: Smuggler’s Guide, with images that convey a heightened hyper-reality that works perfectly within the established tone of the franchise. This is a clever, well-thought-out experiment in Star Wars fiction, and the artistry that went into its execution follows through wonderfully on its promising concept.