From the sinister minds that brought you The Purge, Happy Death Day and Paranormal Activity, comes the new Hulu original horror series Into the Dark, which turns every holiday into a complete nightmare. The new horror anthology series will feature different actors in each episode, with a new episode being released each month focusing on a holiday from that month.

The latest episode of Into the Dark is titled “Pilgrim” and it is the second installment to focus on Thanksgiving, after last year’s “Flesh & Blood.” This new episode definitely takes more chances than last year’s, and most other episodes for that matter, and as a result it is a lot more unique. But that may not always be a good thing. 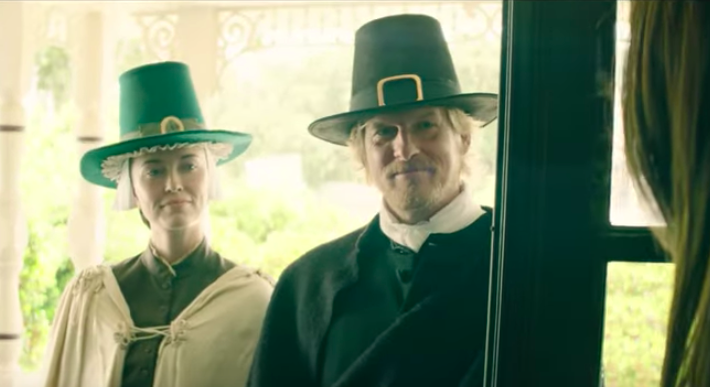 My biggest recurring problem with some of the episodes of Into the Dark has been that they’re too straight forward an predictable, without any sort of twist to add intrigue late in the story. So in the early going of “Pilgrim” I was happy to see how different the story was and how unique the episode was as a whole, from the editing to the characters to every other detail.

As it went on though, it got to be just too outside the box for me. Prior to this, “Treehouse” was probably the most bizarre installment in the series. “Pilgrim” blows that out of the water, and it all starts with the editing. There are multiple times where we get a split screen to see two characters in different locations. We also get several instant replays of what just happened, as if an analyst is going to come on and break down exactly how it happened for us.

That level of weirdness carries over into the truly strange pilgrim characters who appear to have no other motive than to terrorize this family. The main characters ask them what they want several times, to which the response is always some form of “for you to be grateful.” If that’s the case though, why are they straight up trying to kill people? They’re not exactly the most complex or even well-thought out horror villains.

One thing I did enjoy about “Pilgrim” in the early going was the pace. It was a very slow build to the true horror. Many times, Into the Dark will rush into the threat a little too soon and while “Pilgrim” definitely provided some creepy vibes, the threat didn’t fully emerge until very late.

With that being said, it might have been a little too slow. After a certain point, I was just ready for something to happen already. It plays a game of making you think, “maybe they’re not actually bad” because of how long it takes for things to happen. But after a while of hinting at some craziness, it just becomes more and more obvious.

To keep the excitement up in that time, “Pilgrim” employs one horror movie trope that I can’t stand – the cheap jump scare. I don’t have a problem with jump scares when they progress the story, but to throw one in just to add scares where there are none just comes off as annoying. A boiling tea pot, someone entering a room or even just a sudden swell of music for no apparent reason shouldn’t be used to just buy time for when the actual scary stuff comes. 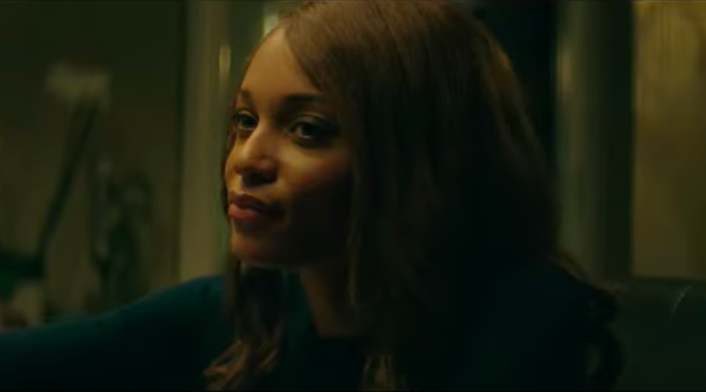 As is always the case with Into the Dark though, it’s not all bad. The cast once again does a fantastic job, especially given the nearly impossible characters they have to play. Peter Giles, who plays the Pilgrim leader Ethan, is a great psychotic villain while Reign Edwards, who plays the skeptical Cody, grounds the episode with a very necessary measure of sanity.

Not to end on a bad note, but that’s essentially what “Pilgrim” does with possibly the most gruesome final act of any Into the Dark installment. While most of the episode is rather tame in terms of blood and violence, the last 15 minutes or so goes so over the top that it will really leave a bad taste in your mouth. Wink wink.

Overall, “Pilgrim” seems to be one of the weakest episodes of Into the Dark. It’s just too bizarre for me, on every level and if you have a weak stomach, the ending will not be for you. Again, the cast does a great job and still provides more than enough reason to watch. Plus, for the second episode in a row, there’s a Pooka hidden in the background! This one is more obvious than the last, so it won’t be hard to find the fan-favorite doll from last year’s Christmas-themed episode (which is still the strongest, and it’s not close).

“Pilgrim” is streaming on Hulu now. Be sure to check out our reviews of previous episodes as I will continue to bring you an advanced warning as to just how much sleep each episode might cost you.