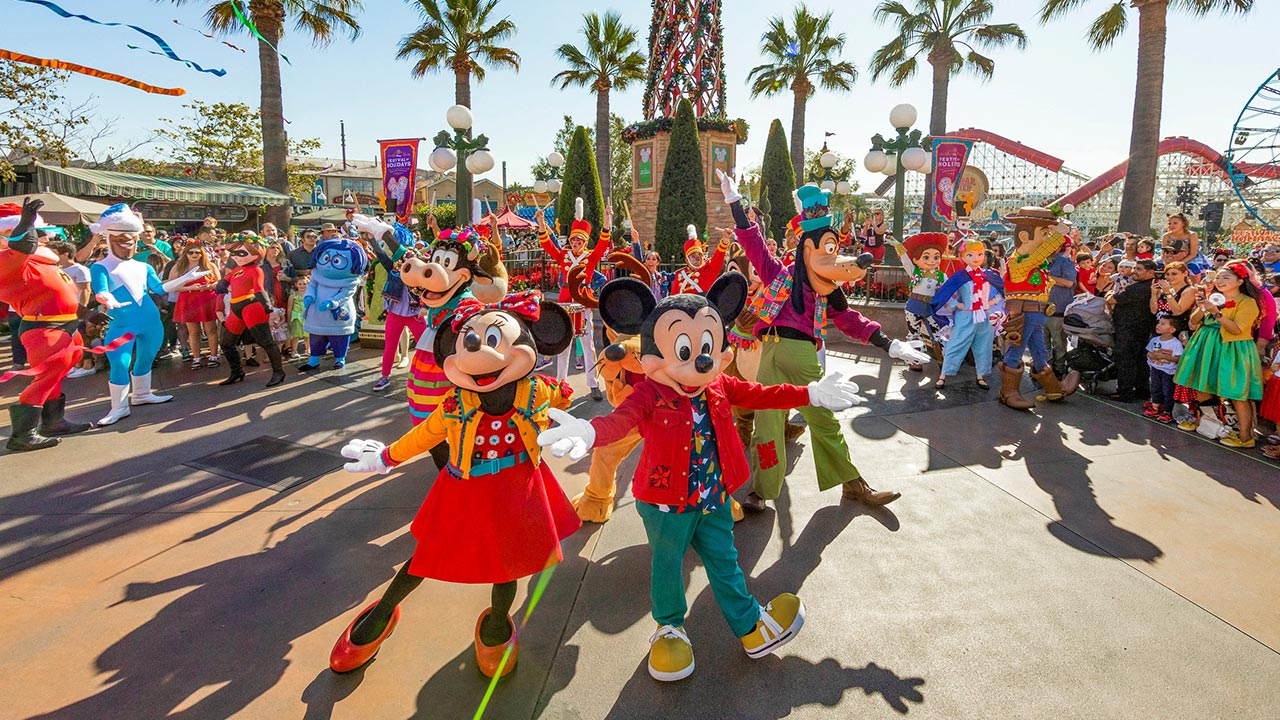 It’s the Most Wonderful Time of the Year at the Happiest Place On Earth once again, and that means both Disneyland and Disney California Adventure theme parks are overflowing with seasonal activities– from festive attraction overlays to live performances, special holiday food offerings, and more.

This past weekend marked the beginning of Disneyland Resort’s “Holidays Begin Here” wintertime celebration, and with it came the return of Disneyland’s popular “A Christmas Fantasy” Parade, “it’s a small world” Holiday, the “Believe… In Holiday Magic” fireworks show, and “World of Color: Season of Light” over at Disney California Adventure. And also at DCA, a new street performance entitled “Mickey’s Happy Holidays” began winding its way through the park’s parade route, with stops in front of The Little Mermaid – Ariel’s Undersea Adventure and the Carthay Circle fountain where Mickey and Friends dance and sing to a peppy new holiday tune.

Across the esplanade at Walt’s original Magic Kingdom, settle in for a viewing of the beloved “A Christmas Fantasy Parade” featuring appearances by Santa Claus, Mickey and Friends, and even a tiny cameo by none other than Forky from this past summer’s hit Disney/Pixar film Toy Story 4.

Right around the corner, you can board a very merry version of the Happiest Cruise That Ever Sailed and experience “it’s a small world” Holiday, which is decked out with colorful lights and jubilant decorations, as those famous singing dolls belt out a mix of “Jingle Bells” along with the earworm for which they’re more commonly known.

Back over at Disney California Adventure, the Disney ¡Viva Navidad! Street Party brings the Three Caballeros out to celebrate a multicultural (and very musical) Christmas, with dancers, giant floats, and special appearances by Mickey and Minnie Mouse.

Then, after dark falls, guests can gather around Paradise Bay overlooking Pixar Pier to enjoy “World of Color: Season of Light,” a dazzling display of holiday cheer with recognizable songs, stunning projection effects, familiar characters, and giant plumes of water shooting up into the air.

And let’s not forget the specialty food and beverage options available around Disneyland Resort this time of year. From new seasonal popcorn buckets to the delicious-looking “Thanks-mas” sandwich to the Peppermint Mickey Shake, there are plenty of jolly options for every kind of taste bud around both Southern California Disney theme parks this holiday season.

“Holidays Begin Here” runs from now through Monday, January 6 at Disneyland Resort in Anaheim, California. For more information and advance ticketing resources, be sure to visit the official Disneyland website.