Disney has done it again. Their favorite magic word isn’t “abracadabra,” but rather “synergy” and oh boy (!), have they taken things to a new level. Poor ABC, the just want their parent company to give them a little attention. On a Monday’s episode of the daytime soap opera, General Hospital, teenager Josslyn Jacks is seen sporting a Disney+ baseball cap complete with the launch date on the back! 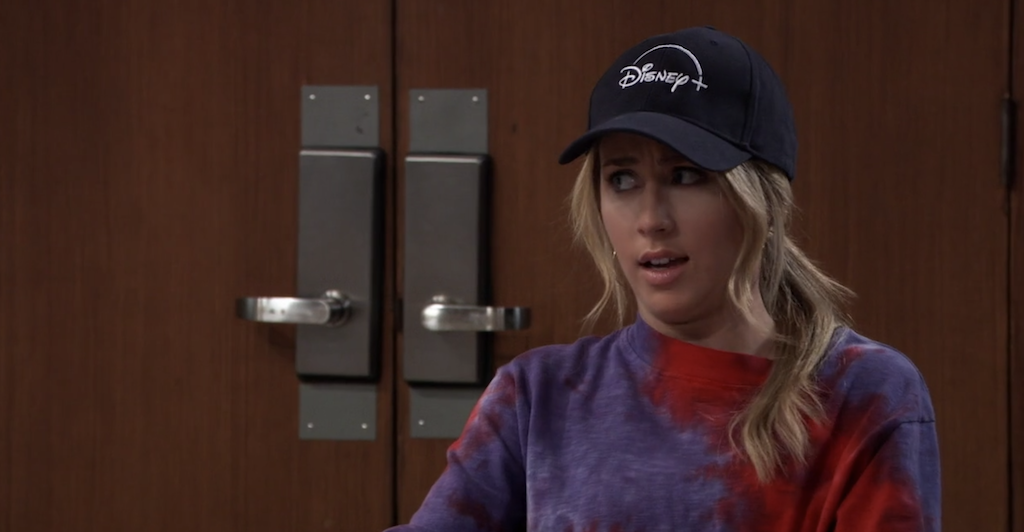 If she looks familiar, that’s because last year, Josslyn made an effort to chase down the Mickey 90 Steamboat Willie plush as a gift for her little sister who, by the way, “was even more excited about Mickey’s 90th than Mickey himself.” Her search ultimately led her to the Disney store (wow, who’d have guessed?) where it was super crowded, but the staff was still so nice. Now back to today’s episode, Josslyn is at school with three of her friends but no teacher in sight and the gist of it, they’re in detention.

"But it's a cartoon, right?" "Wrong. Live-action on #DisneyPlus." "General Hospital" is back with another moment of over-the-top #synergy:https://t.co/PbOAxktoAw pic.twitter.com/wjcIxf474Q

When we cut back to the group, a discussion involving potato chip flavors comes up before Josslyn confirms that she’ll have all four different flavors at “my Lady and the Tramp screening party.” And then this fantastic dialogue takes place:

Trina: “Oooh and spaghetti and meatballs. You have to serve them for the date scene.”

Josslyn: “Yes, I’m ordering it from Luigi’s. So are you guys in?”

Trina: “And don’t say it’s a kid’s movie. Adorable is adorable at any age.”

Cameron: “Live action, so like with dogs…eating actually spaghetti?”

Josslyn: “Ok, please can you just not question how they do it? Just enjoy the actual results, please. You guys in?”

Cameron: “There you go.” Yes, Disney is the parent company of ABC. Yes, it’s normal to promote your own brands across your various platforms, we all expect that, but it somehow feels a little pushy when TV characters put an emphasis on such specific real world things.

Case in point, just a few months ago following the opening of Star Wars: Galaxy’s Edge, several of ABC’s primetime shows brought attention to the new land. It was mostly subtle, a t-shirt here, a mention there, but then you had Adam Goldberg getting excited for their family vacation to Disneyland saying something along the lines of “they just opened Star Tours! Sure, I’d love it if they built a whole land, but a boy can dream!”

Disney we love you, and we know not everyone is as steeped in the company news as fan sites and hardcore fans, but please know you don’t have go to this length to get our attention!

And now our shameless pitch…you can experience hundreds of new and classic Disney movies, series, and shorts with a subscription to Disney+. Or enjoy the best of sports and television—including recent episodes of General Hospital with the Disney+, ESPN+, and Hulu subscription bundle.