This is the end for Doctor Chelli Aphra. Or is it? Spoiler alert: it’s not, because even though issue #40 of the relatively new Star Wars character’s self-titled Marvel comic book represents the finale of this current run, her story will continue in the one-shot Star Wars: Empire Ascendant in December, and then in a relaunch of Star Wars: Doctor Aphra (starting over again at issue #1, of course) in the new year.

Still, Star Wars: Doctor Aphra #40 may be my favorite issue of the comic, which I can say I enjoyed through all forty chapters, because it does delivery a sort of finality to the rogue archaeologist and her travails. I liked the Aphra enough as a personality when she was introduced a few years ago in Star Wars: Darth Vader that it made perfect sense to me when she became the first character who originated outside of the movies to receive her own ongoing Star Wars comic. And I’d call this installment a fantastic ending for her, if I didn’t already know her misadventures will go on from here. 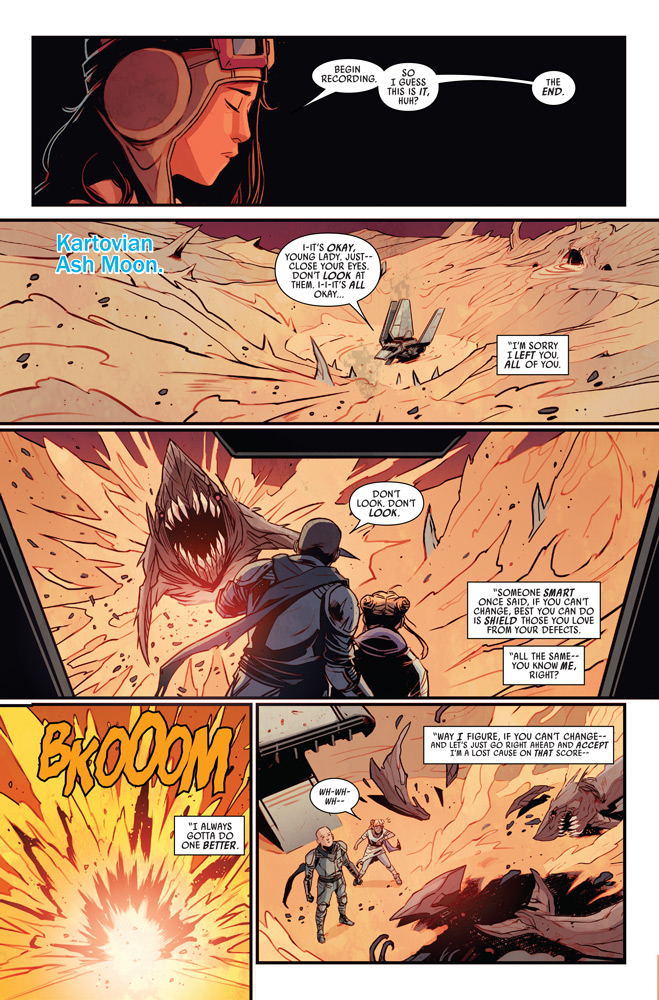 In an ostensibly uncharacteristic act of selflessness, Aphra has dumped her ward Vulaada, her father Korin, and her rebel girlfriend Magna Tolvan on the same sand-shark-infested desert planet (to be fair, she didn’t know about the sand sharks) where they can hopefully take care of each other while she deals with some unfinished business. In a surprise twist from the ending of last issue, Chelli doesn’t actually reveal to her on-again-off-again boss Darth Vader that the Rebel Alliance has established a new base on the ice planet of Hoth. Instead, she brings Vader and his minions to a different snowy planet, where there exists an ancient temple that will help her Home Alone the baddies– with the unlikely help of those devious droids Triple-Zero and BT-1. 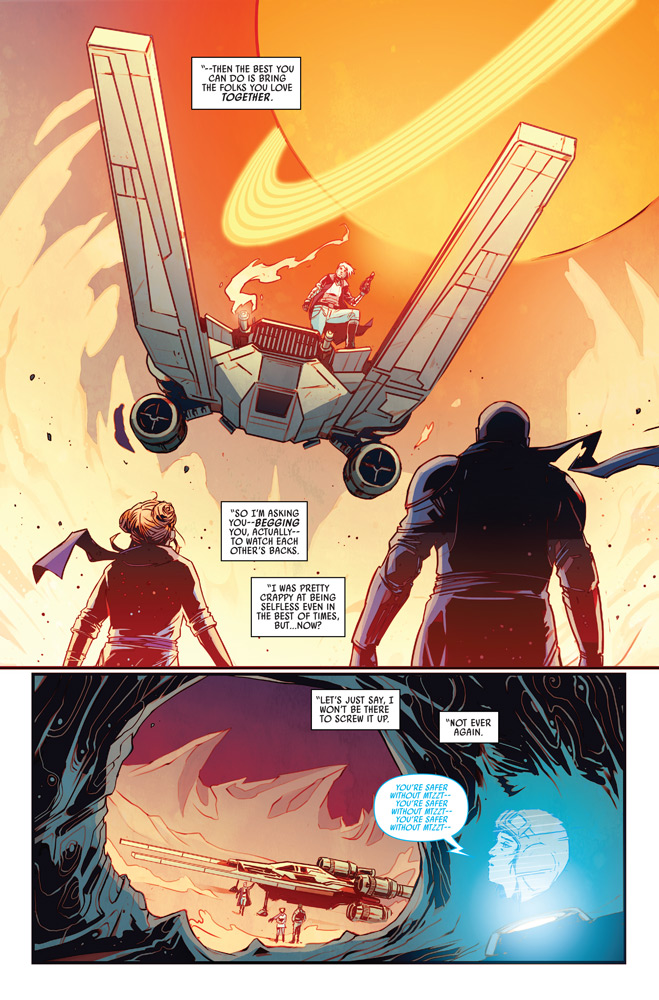 So, utilizing a series of long-ago-installed booby traps, Aphra manages to separate Vader from his Imperial officers and snowtroopers, then entrap him in a Force-infused confessional chamber, where she delivers her final denunciation of the Dark Lord by doing the one thing I honestly did not expect– identifying with him. Aphra is smart enough not only to use her home-court advantage (“Don’t pick a fight with an archaeologist in a spooky old ruin.”) to take down the former Anakin Skywalker, but also to see what the two have in common and why their paths keep crossing: they’re both broken for a lot of the same reasons. I think there are some fans who will complain that Aphra bests Vader at all, but to my mind the situation makes perfect sense given the existing context– and further enforces her gradual turn toward the light from the Han Solo center where she started when she elects not to murder her tormentor. In the end, Aphra is revealed to be a major catalyst in helping the rebels establish their base on Hoth simply by buying them enough time to set up their defenses, and if the character had truly come to her ultimate fate here I would have loved having this magnanimous deed established as her legacy. 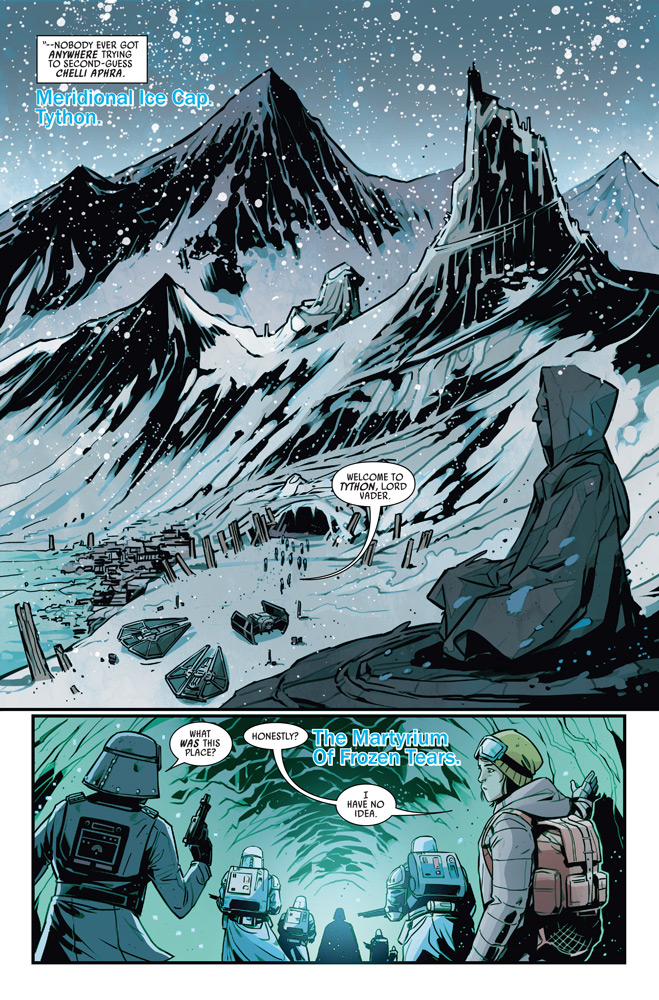 But, as old man Luke Skywalker says in Star Wars: The Last Jedi, “no one’s ever really gone,” and Aphra escapes with her life– not to mention the cranium of Triple-Zero and BT-1’s processor core. In a way, it’s nice to know we’ll get to have more fun with these three in the coming phase of Marvel Star Wars comics set after the events of The Empire Strikes Back, but at the same time I kind of wish Aphra’s hail-mary scheme had come with a weightier sacrifice as its cost. Instead, we’ll have to wonder what kind of antics this trio of strange bedfellows will get up to next. 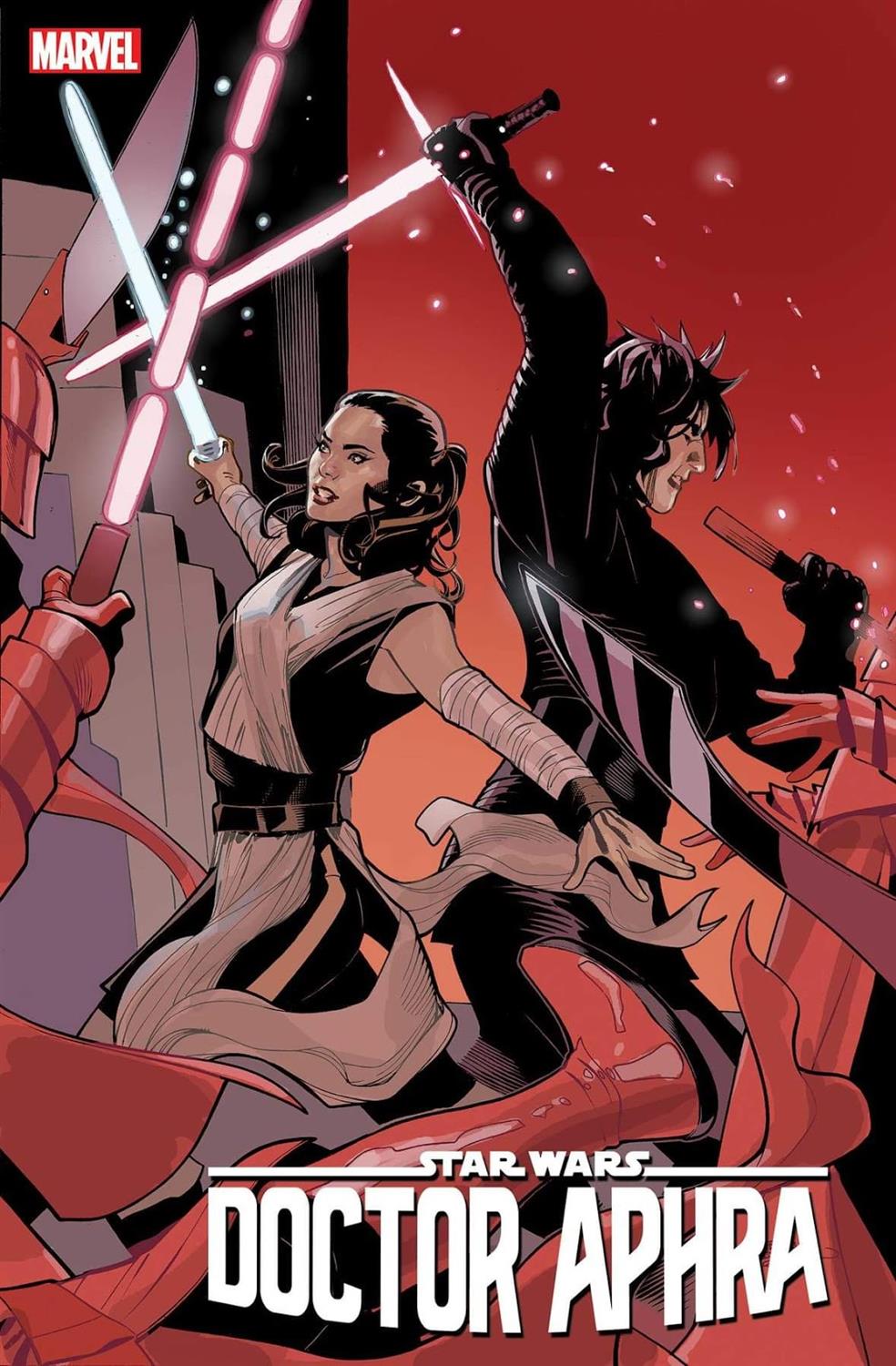