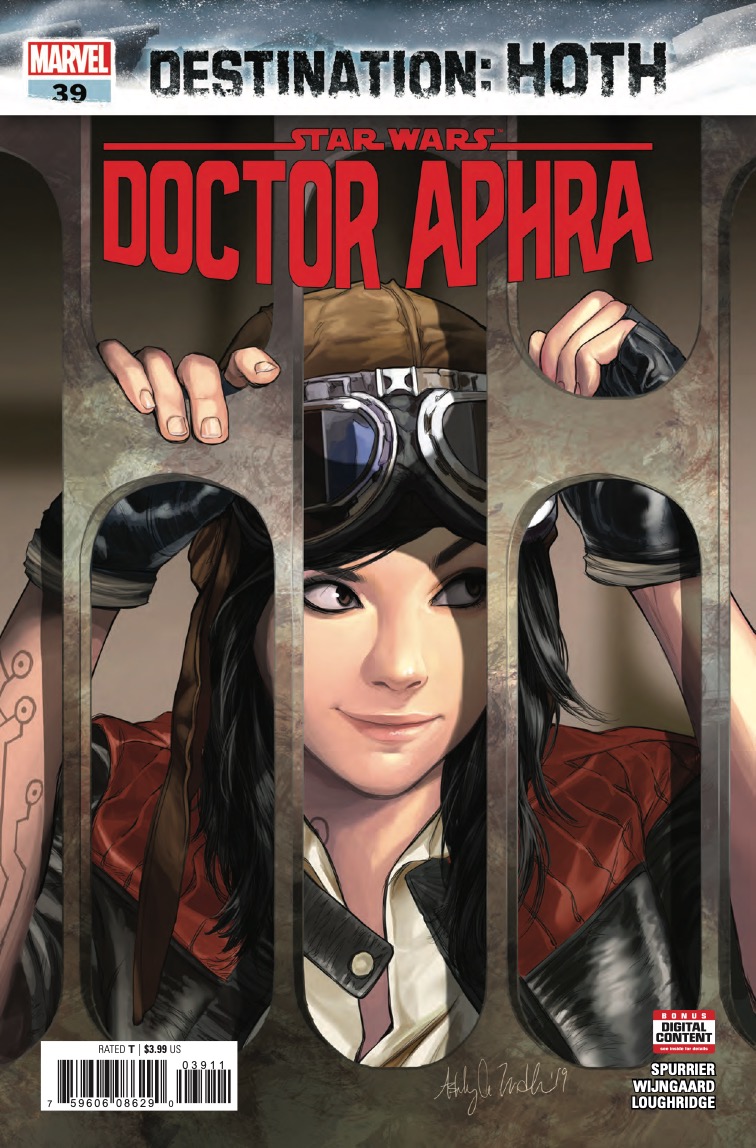 Not only is Doctor Aphra #39 the penultimate issue of the first ongoing Marvel Comics Star Wars series to focus on a character created for the comics, but it also ties into the larger “Destination: Hoth” framework building toward the climactic Star Wars: Empire Ascendant one-shot, which should flow directly into the events of The Empire Strikes Back. If any of that is confusing to you, I can’t blame you, but I also have to guess you don’t care enough to have been paying attention to ancillary Star Wars media over the past few years.

The current arc of Star Wars: Doctor Aphra is subtitled “A Rogue’s End,” but don’t let that fool you. After this title ends next week with issue #40, it will be relaunched with restarted numbering beginning again at #1 next April. Still, the comic’s recent storyline represents something of a climactic turn of events for the rogue archaeologist. After entering into indentured servitude as part of the Empire’s research team hunting for the Rebel Alliance’s latest hidden base, Chelli Aphra finds herself reunited with her ex-lover (and ex-Imperial officer) Magna Tolvan. Tolvan’s now working for the Rebellion, and she captures the shuttle tasked with returning Aphra and her father to Darth Vader’s Star Destroyer. Naturally our protagonist isn’t one to allow herself to be captured that easily, so she runs rampant– almost Bugs Bunny-style– over the Rebel Intelligence vessel she’s been taken aboard, before confronting Tolvan face-to-face and talking her way into a rekindling of their romance. And always looking for a way to gain the advantage, Aphra uses her connection (both literal and emotional) with Tolvan to uncover the name of the planet for which Darth Vader is so desperately searching. Back on the Ash Moon of the Kartovian Formation, Chelli’s abandoned ward Vulaada is rescued from her sand-shark predicament by Korin Aphra (Chelli’s estranged father), who was sent away unconscious in the Imperial shuttle as a diversion to let Chelli herself slip away from the rebels in an escape pod. Then Aphra uses her only companion, the evil Astromech droid BT-1, as a means to contact Vader via his counterpart Triple-Zero, and make an offer to turn over some now-extremely-valuable information to the Dark Lord of the Sith. As a comic book, I think Star Wars: Doctor Aphra has worked better for me than Marvel’s main Star Wars title because of its ability to put the spotlight on a single freshly created character surrounded by a group of interestingly rag-tag supporting personalities, rather than the familiar team of Luke, Han, Leia, and the gang from the original trilogy. It’s also more compelling to watch these stories play out because we don’t inherently know where Aphra winds up– her path is a big question mark after this era of the Star Wars saga, unlike Luke and company, whose comic adventures have mostly felt like their entire purpose is to fill in previously established blanks. Doctor Aphra is an appealing and engaging enough character that I can’t imagine she’ll be going away any time soon, and she’s certainly captured the imagination and demand of the Star Wars fanbase enough to generate her own official action figures, custom convention cosplays, and online petitions to bring her over into live-action content as soon as possible. We’ll find out over the next month just how she’ll factor into a post-Empire galaxy, and then come this spring I have a feeling Aphra will continue to make her presence known in A Galaxy Far, Far Away.