Marvel has no shortage of classic characters with roughly 80 years of stories under their belts. Captain America, Spider-Man, Iron Man and so many more have been entertaining comic book fans for a long time. So when one of those classic characters gets their own brand new series, fans take notice.

That’s the case today with the release of “Thor #1.” The God of Thunder is setting off on a new adventure as the king of Asgard in the wake of the “War of the Realms.” The only question is, is he ready to give up is days as a god in order to become a true king? 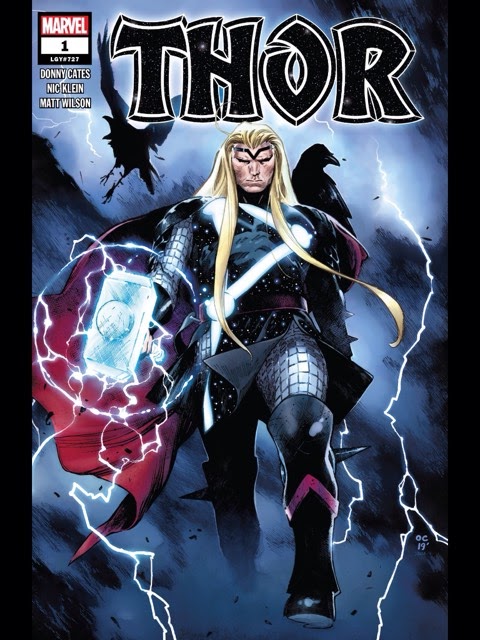 Many Marvel stories have dealt with Thor finally sitting on the throne of Asgard, including the recent story arc simply titled “King Thor.” This one though, feels different. Thor is unsure of himself as a king and not quite ready to give up his days of smiting frost giants in order to deal with the politics of running Asgard.

On top of that, he feels himself weakening and the weight of Mjolnir becoming greater every time he lifts it. His doubts and waning strength combine to create a threat unlike any he’s ever faced. Of course, that’s not all Thor will have a face in this new story though. What would a Thor story be without an imminent disastrous event threatening life in all nine realms as we know it?

Unfortunately, in order to introduce this threat, the new comic does use a classic comic books trope. A major villain from past comics arrives, wounded and looking for help, when Galactus falls from the sky on top of Asgard. We’re of course supposed to look at this and think, “well if something did this to Galactus, it must be bad!” As I said though, we’ve seen this kind of thing several times before, so personally I kind of just shrugged it off. 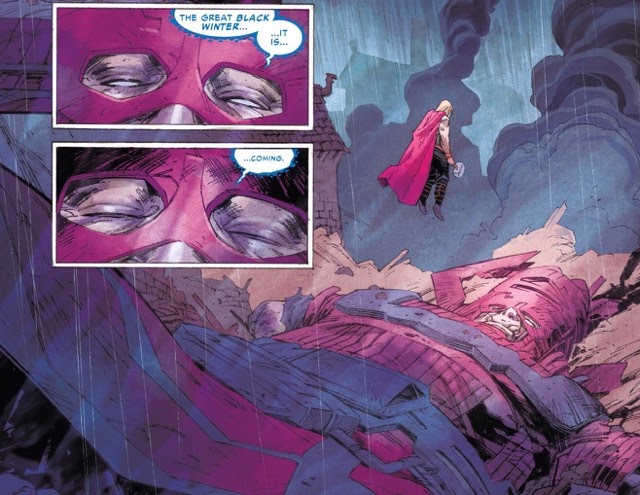 The story does get very interesting after that though as Thor calls on the help of the Heralds of Galactus, including the Silver Surfer. We get a look at the mysterious past of the devourer of worlds and set up a very interesting premise for the rest of this stroy arc. I won’t go too much into details but I will say it seems like it’s going to be a fun team-up.

The comic doesn’t end without a little bit of a twist. Again, I won’t spoil anything here, but we do get to see Thor sporting a pretty exciting new look. 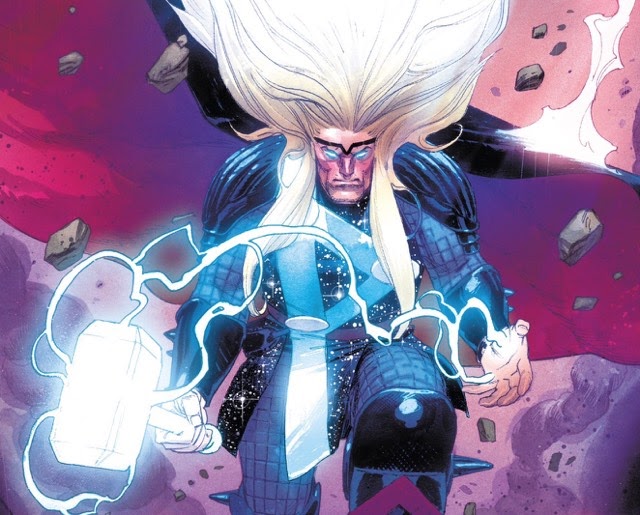 This is a great start to what should be a fine new story arc. Aside from the use of that “former big bad beaten by an even bigger bad” trope, this felt like a fresh story. I’m excited to see where this goes and just how big this threat really goes. And let’s not forget that in any Thor story, Loki, who does make an appearance in this first issue, is always lurking in the shadows.

I also very much enjoyed the art in this comic. Artist Nic Klein created some bigtime Thor: Ragnarok vibes with colors he used in this issue. I could almost hear Led Zeppelin playing in my head during every action sequence.