Marvel Comics has been loaded with iconic rivalries for years, but perhaps none is moe iconic than the one between Thor and his brother Loki.

The two characters have fought across dozens of comic books, animated series and movies, but their fight has never carried as much weight as it does in the first issue of the new series “King Thor.” This new series introduces to a new Loki who has been given the power of a weapon known as the All-Black and the new title of the All-Butcher. Set in the future, this new series features Thor and his three granddaughters – Frigg, Ellisiv and Attli – as they prepare for the impending fight with the new God butcher Loki has become. Earth has just recently been brought back from annihilation by Thor and now Loki plans to destroy it again, along with all life in the universe so that he can live alone in eternal darkness.

There is certainly a lot to this story and I would personally have been lost if I hadn’t been reading so many comics lately that have provided a bit of context for this story. It’s not exactly a great starting point for readers who are just looking to get into a new Thor story.

Still, if you’re willing to check out some other comics to provide some context (like “Absolute Carnage #1” for example) there is a lot to enjoy here. Like I said, this is possibly the biggest fight ever between Thor and his mischievous brother. 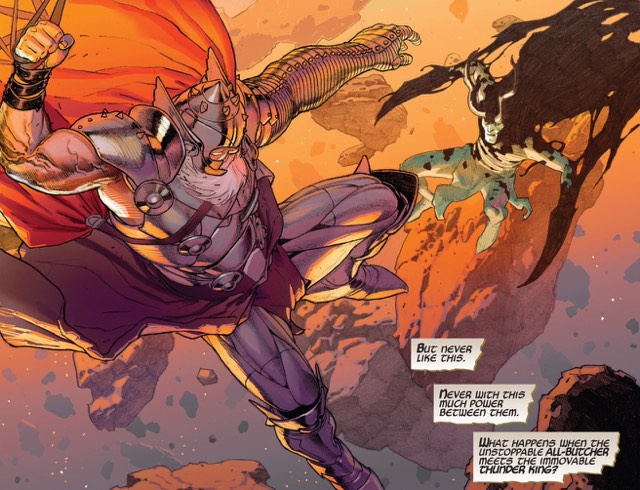 This first issue doesn’t even actually provide a lot of context for its own story beyond the introduction page. Thor and Loki are fighting right from the beginning while his granddaughters are in an ancient library looking for answers as to how they can stop the new God butcher.

If you like your comics filled with nonstop action, you’ll enjoy this one. Multiple cities, planets and even stars are destroyed in the epic fight between the two Asgardian brothers while the story is more or less told through narration around their battle.

And by the way, it is a pretty cool fight. Like I said, they level planets while throwing each other through space. At one point, Thor even flings Loki into the sun by attaching him to Mjolnir. Oh and of course, Symbiote Loki!? It doesn’t get much cooler than that. The issue also sets up an interesting new story in which Thor is coming to terms with the fact that he will have to finally kill his brother. Though unfortunately for him, that’s not going to be as easy as he hoped (that sun thing doesn’t work out to well for him). A classic cliffhanger ending provides an even bigger threat that I won’t spoil here, but it sets up what should be a very interesting new Thor story moving forward.