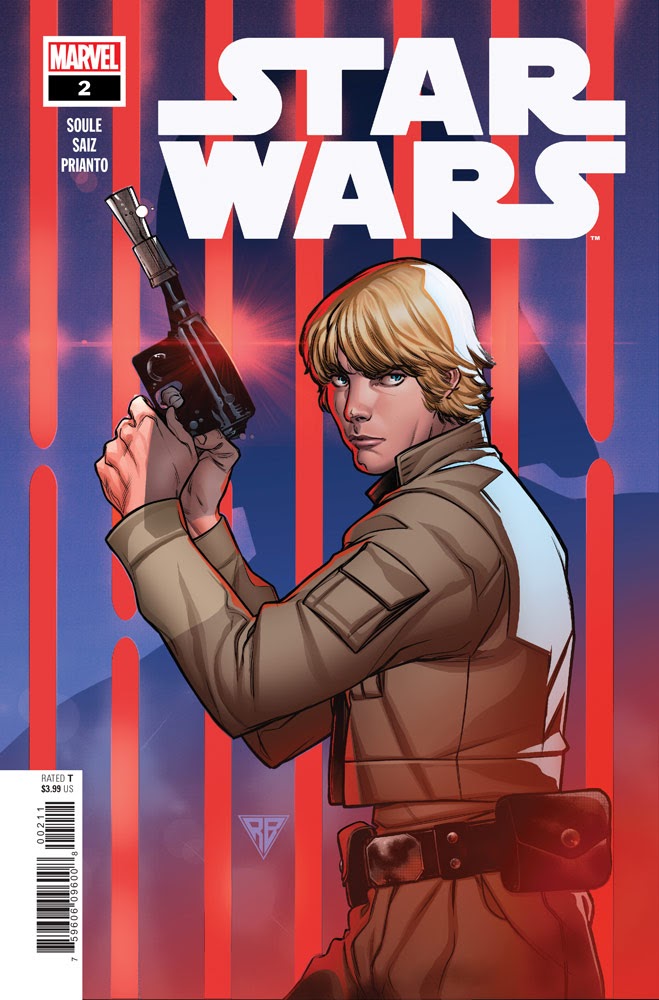 I enjoyed the previous run of Marvel Comics’ main Star Wars title, which ran from early 2015 through the end of last year, but I am genuinely excited about the newly relaunched and renumbered Star Wars comic, which started with issue #1 earlier this month and continued with #2 today.

First of all, writer Charles Soule (Star Wars: Darth Vader – Dark Lord of the Sith, Star Wars: The Rise of Kylo Ren) has proven himself to be one of the best contributing authors to this franchise since Disney purchased Lucasfilm back in 2012. Plus, artist Jesús Saiz (Doctor Strange, Captain America) really captures the mood of this post-The Empire Strikes Back moment in the larger Star Wars canon. This may be the first run of the Star Wars comic that actually matches the feel of the movies that surround it, and that means it also comes across as a tiny bit divorced from the comics that preceded it (there’s no Dar Champion or Warba Calip to speak of) but that’s perfectly fine with me. Soule has somehow figured out a way to fill in the gaps between Episodes without having the content feel like filler, and that’s a feat worthy of tremendous praise. Some of the individual scenes in Star Wars #2 could convincingly be presented as deleted scenes from Empire, as the first act of this issue is set prior to Lando leaving the Rebel Alliance fleet to look for Han on Tatooine. It did bother me a little that they switched who was piloting the Millennium Falcon and who served as co-pilot, but I get it. After all, it’s not wise to upset a Wookiee. 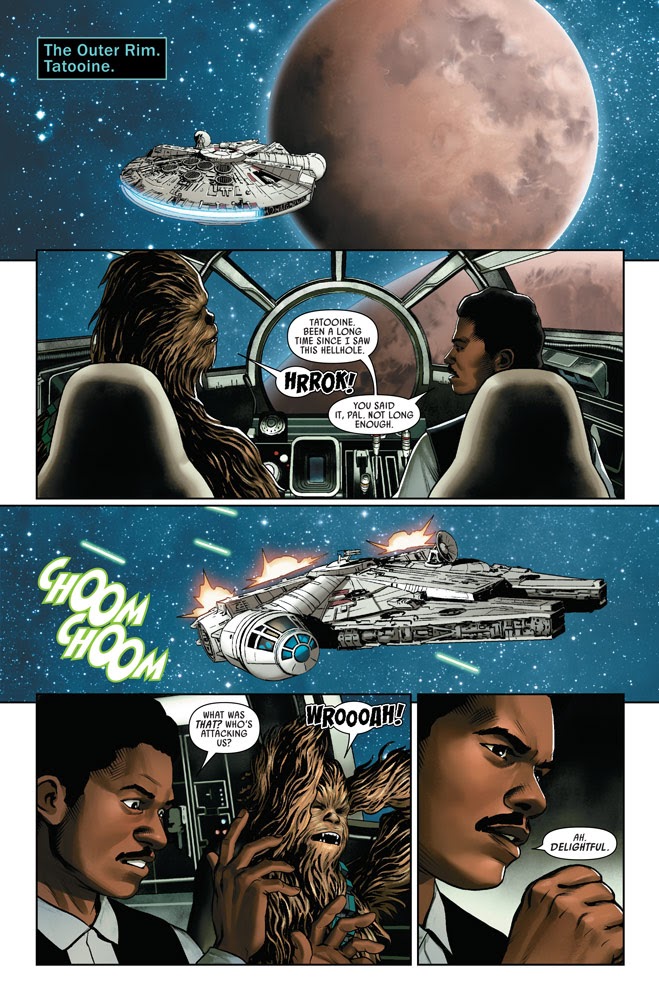 We get a smidgen more of Leia being understandably distrustful of Lando, we see Luke’s troubling flashbacks to the lightsaber duel against his father Darth Vader and find out more about his PTSD-fueled dissociation from the Force, and we get to hang out in Jabba’s Palace for a few pages as Lando chases down clues as to Han’s whereabouts. I’m really interested to find out why Boba Fett didn’t run directly to Jabba to collect his bounty, and I suspect we’ll be finding out more about that very soon, either here or in the pages of Marvel’s new Star Wars: Bounty Hunters title which begins in March. 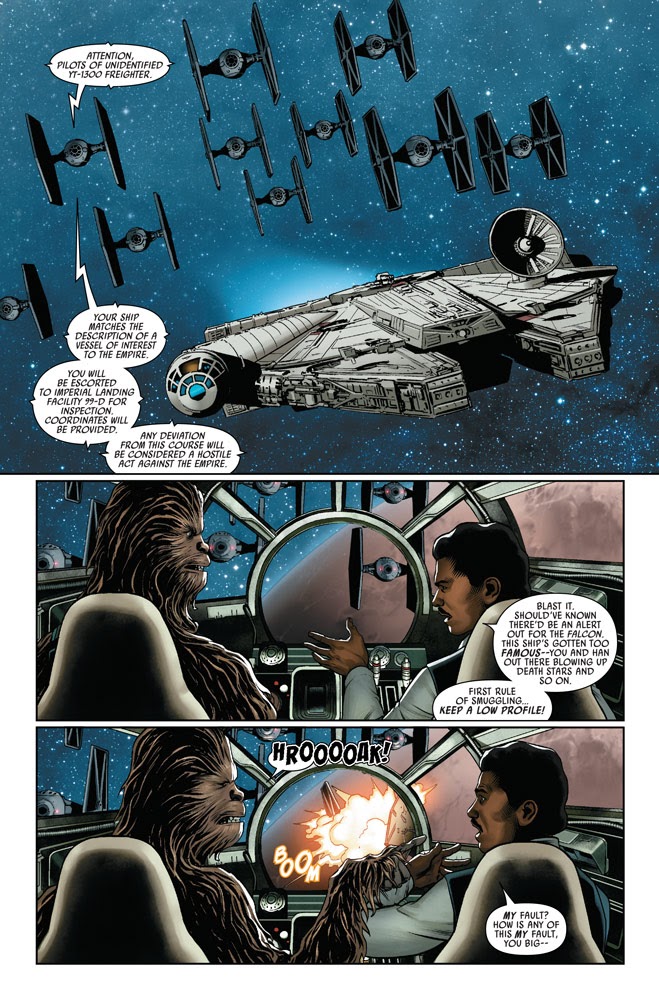 We also get a few additional tantalizing hints about the newly created High Republic era, which is heavily rumored to be the focal point of Lucasfilm Publishing’s upcoming “Project Luminous” initiative. I have a feeling that endeavor is likely to be based around the “Operation Starlight” space station first introduced by Commander Grek in his speech during the rebel briefing in this issue. Basically, it served as an interstellar lighthouse to help travelers find their way through “dark zones” of the Outer Rim in the earlier days of hyperspace navigation. Grek uses this as a metaphor for how the rebellion can reunite their scattered forces after the Battle of Hoth, but I can’t help but sense there’s a bigger reason for it that information to be made known at this point in time. 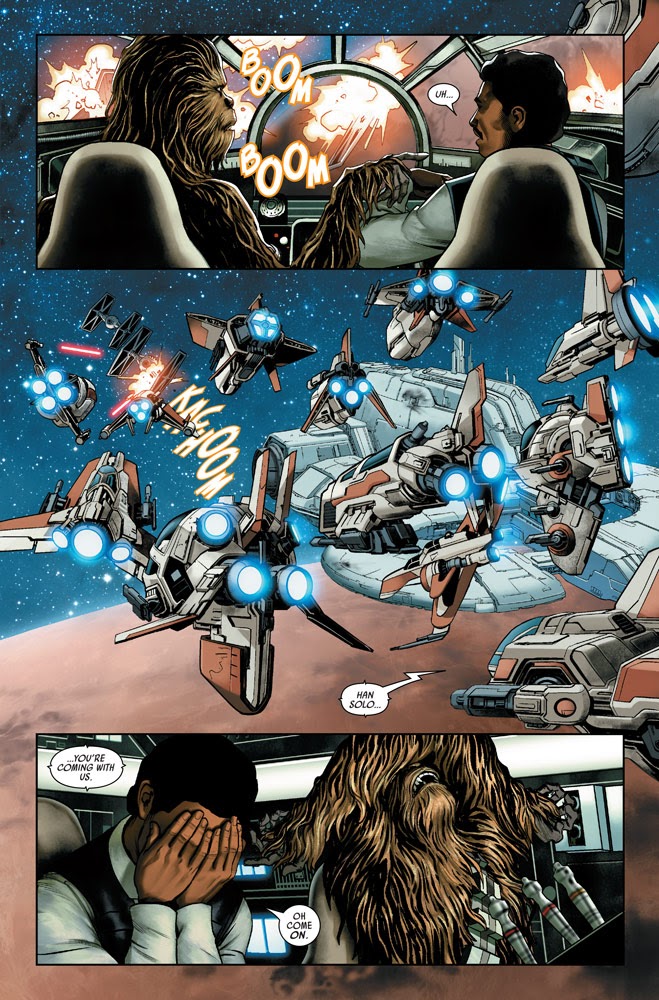 But even with all that already happening, there’s an even bigger twist in Star Wars #2– one that addresses such a huge lingering question in current Star Wars mythology that I’m hesitant to even mention it here, so consider yourself forewarned with a SPOILER WARNING…

Yes, this issue hints that we’ll be exploring what happened to Luke Skywalker’s lightsaber (the one passed down from Anakin and later on to Rey) after he loses his hand to Vader at Cloud City. Indeed we see– as Luke sees, via a Force vision– someone else’s hand grab the saber as it falls down that chasm on Bespin. Then we’re shown a cloaked, hooded figure wielding the hilt horizontally and telling Luke to “follow your destiny.” It’s all very tantalizing, and I don’t even have a first guess as to who that person could be. Do you? Actually maybe I do have a guess or two: Cal Kestis? Ezra Bridger? Maybe Ahsoka Tano? But if any of these characters are around just prior to the events of Return of the Jedi, why don’t they help out during the Battle of Endor? Regardless, I’m super thrilled that Maz Kanata’s promise of the story of that lightsaber’s journey being told “another time” is finally coming to fruition. And seemingly all it took for that to happen was for the sequel trilogy to end. 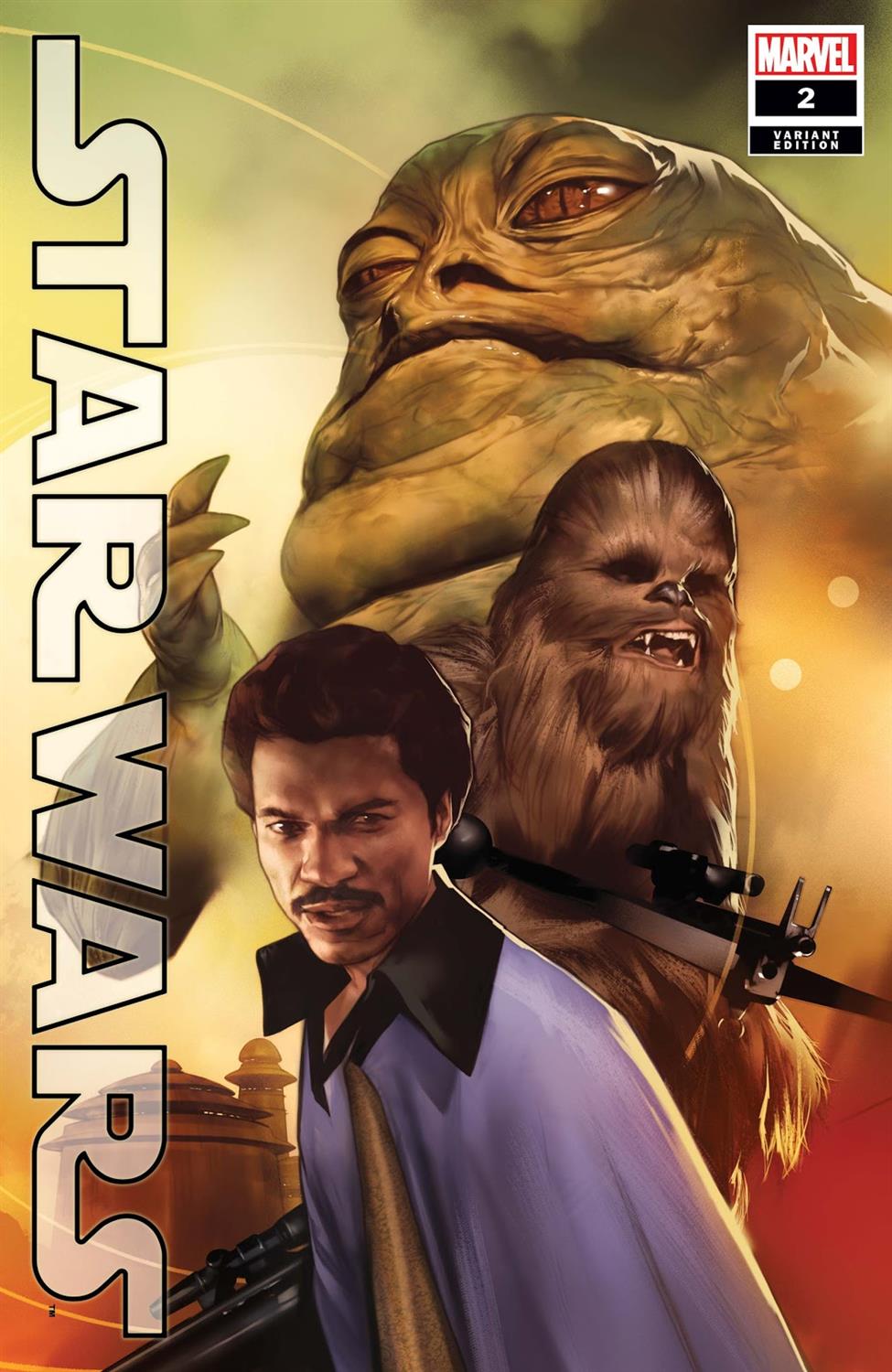 Star Wars #2 is available now wherever comic books are sold.