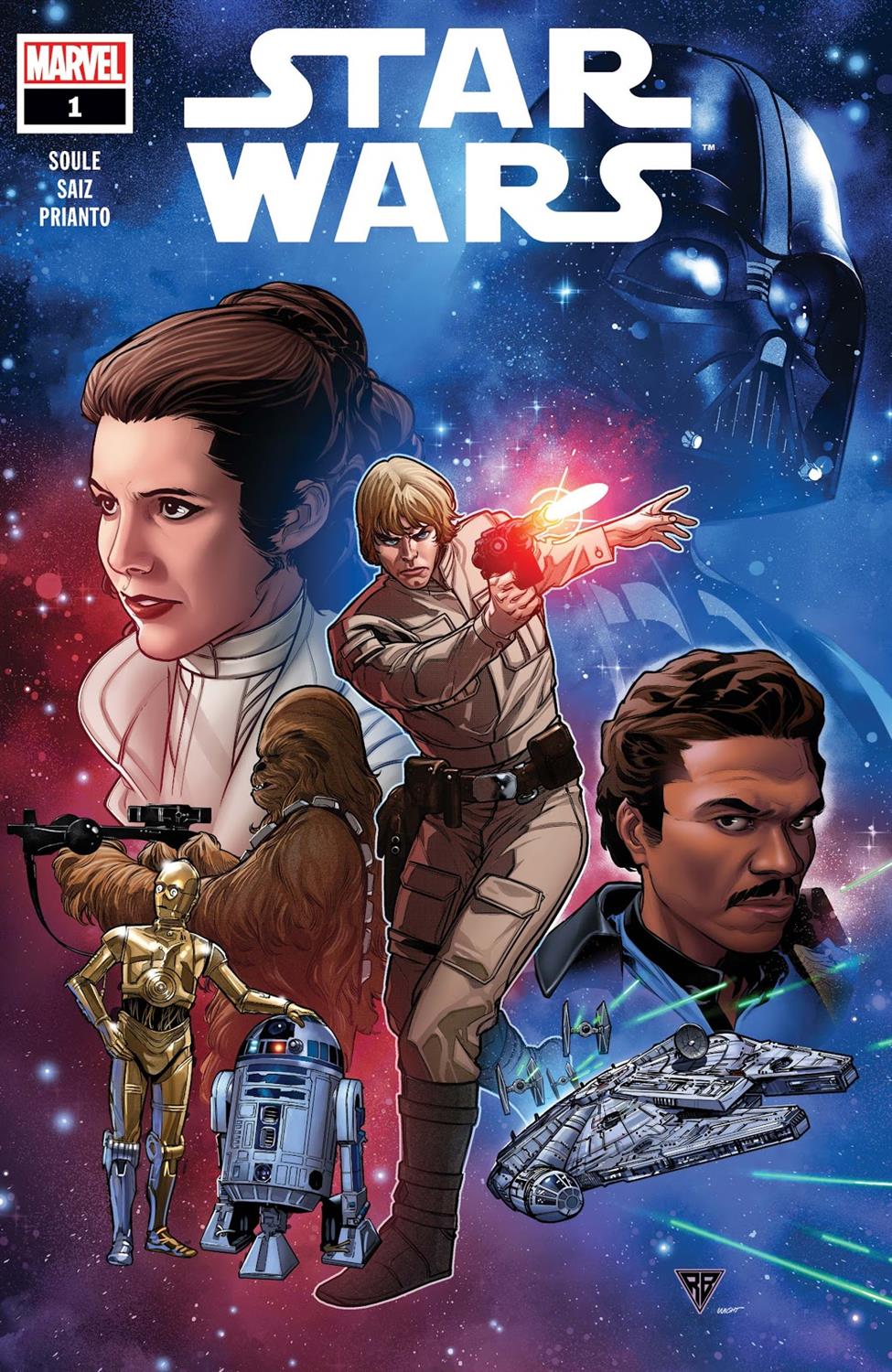 When I was a teenager, Lucasfilm issued a multi-media project called Star Wars: Shadows of the Empire, which endeavored to fill in the narrative gap between Episode V – The Empire Strikes Back and Episode VI – Return of the Jedi. To that date it was the only major storytelling venture set in that time period other than Marvel Comics’ by-then-non-canonical Star Wars comic book series, which was actually published in the time between the two movies’ releases in theaters in the early ‘80s.

Now Marvel is heading back to the post-The Empire Strikes Back era with its new-canon relaunch of the Star Wars comics under Lucasfilm’s (and Marvel’s) current owner Disney– Star Wars #1 was published this week, and the reset numbering indicates a new beginning for the title, despite the fact that it emphatically takes place in medias res when considering its context within the larger Star Wars saga. Indeed, Star Wars #1 picks up immediately after the events of The Empire Strikes Back, with Han Solo having been frozen in Cabonite and captured by bounty hunter Boba Fett, and Luke Skywalker, Princess Leia, and Lando Calrissian escaping on the Millennium Falcon with Chewbacca and the droids R2-D2 and C-3PO. Leia is understandably mistrustful of Lando due to his betrayal at Cloud City, while Luke is still reeling from the devastating reveal that Darth Vader is his father. 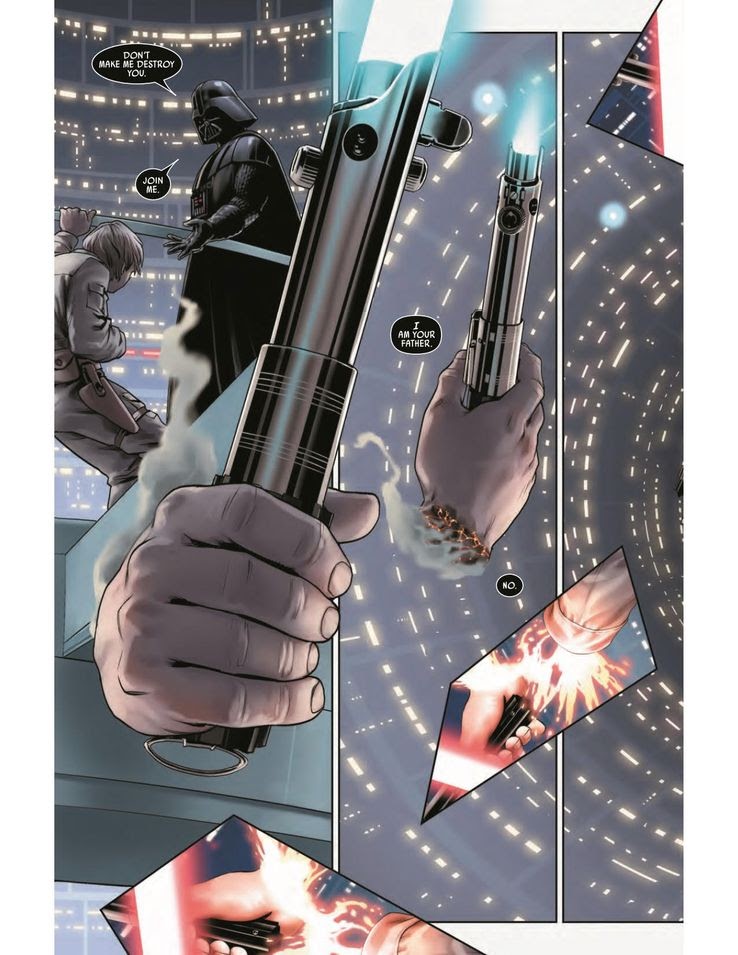 We find out that the Falcon didn’t quite make it back to the Rebel Alliance fleet without any difficulty– it turns out Imperial forces had tracked down two rebel cells and had engaged them in a colorful star-adjacent space battle, still raging upon the ship’s return. We get introduced to a new Imperial commander named Zahra who I suspect will serve as a major villain during this run of the comic, and it’s strongly indicated that we’ll also be spending a lot of time with Poe Dameron’s parents Kes and Shara, who were first introduced in Marvel’s Shattered Empire miniseries, which took place later in the timeline, after Return of the Jedi. 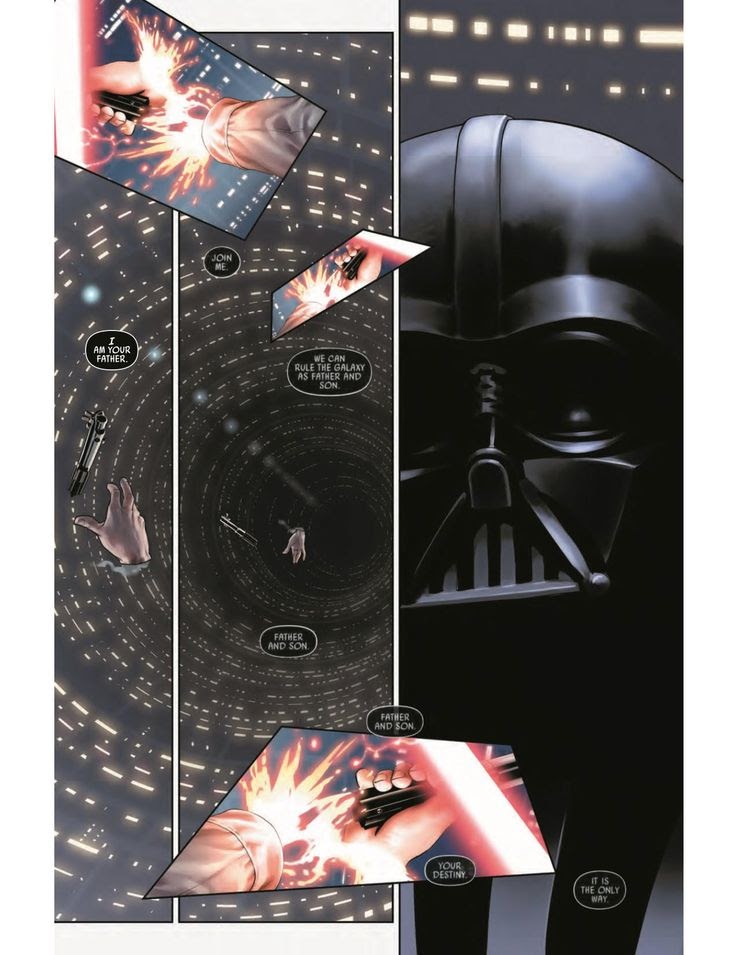 Writer Charles Soule (Star Wars: Lando, Star Wars: Obi-Wan and Anakin, Star Wars: Darth Vader – Dark Lord of the Sith) obviously already has a handle on how to tell stories with these characters, and he nails each of their individual voices. The conversations between Leia and Lando, in particular, sound as though they are being delivered directly through the mouths of actors Carrie Fisher and Billy Dee Williams, not to mention the typewriters of screenwriters like Lawrence Kasdan and Leigh Brackett. And artist Jesus Saiz (Doctor Strange, Captain America, Star Wars: Doctor Aphra) beautifully captures the cataclysmic atmosphere coming out of the end of Empire, while never sacrificing recognizable likenesses of all these familiar faces and locations. 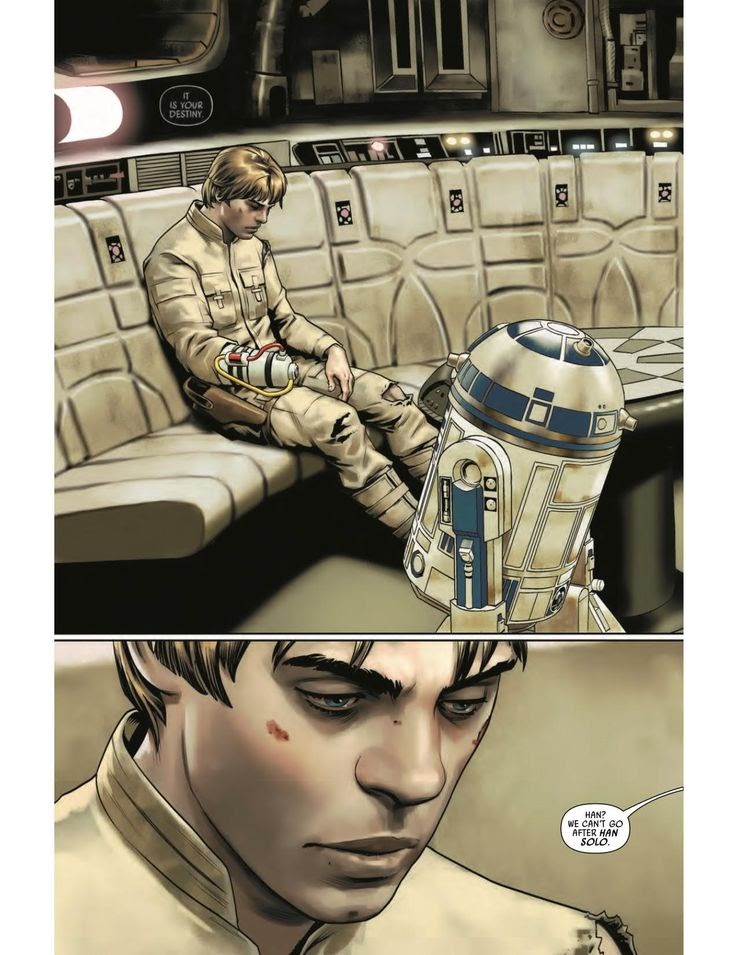 I’m especially impressed by the emotional weight hanging over Luke as he attempts to come to terms with his parentage and the fact that this devastating truth delivered to him by his sworn enemy means his mentors Obi-Wan and Yoda deliberately misled him. I’m incredibly interested to follow Luke’s coming path in this series, as he adjusts to his newfound place in the galaxy and seeks out a means to construct his own lightsaber. But I imagine we’ll also see Leia and Lando’s relationship evolve, more interaction with the Damerons, and even the occasional appearance by Vader himself– though the Dark Lord is getting his own relaunched title beginning in February. This is a very exciting time in Star Wars comic storytelling– I’ve said for years the absence of Han Solo would inject some much-needed internal conflict into this series which often felt as though it was treading water exploring the period after Episode IV – A New Hope. Lando’s presence is also a welcome one, as I’ve wanted to see that character fleshed out more since the Expanded Universe canon got wiped clean in 2012. I somehow doubt we’ll be meeting Dash Rendar or Prince Xizor along the way, but I am genuinely looking forward to seeing what this team comes up with as an alternative to the Shadows of the Empire strategy. 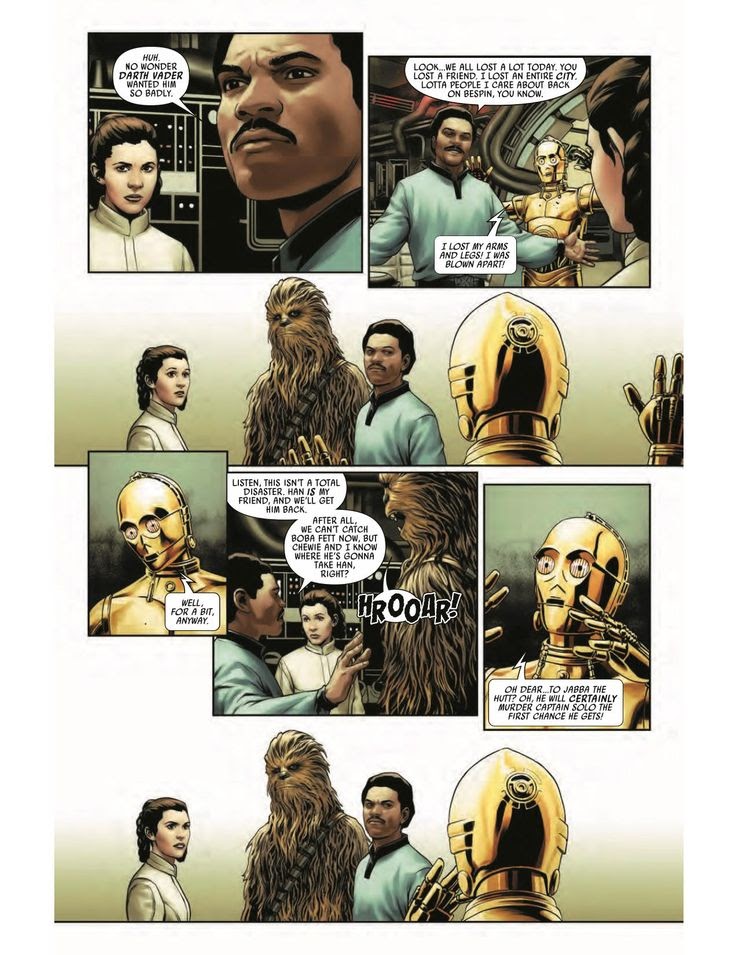 Star Wars (2020) #1 is available now wherever comic books are sold.