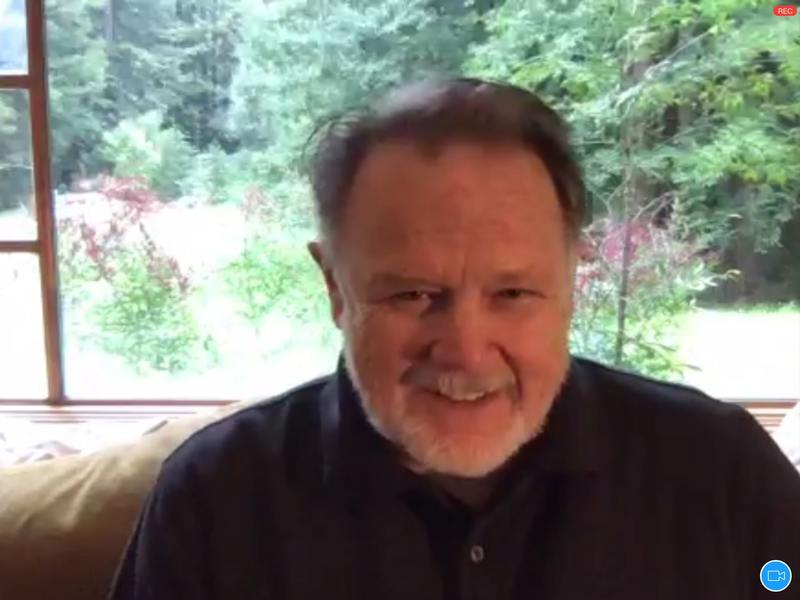 The Walt Disney Family Museum’s second Happily Ever After Hours virtual event was a live Q&A with Muppet performer Dave Goelz, puppeteer and voice of The Great Gonzo and Dr. Bunsen Honeydew among others. Dave joined the Muppets team in the 1970’s before the start of The Muppet Show and has remained with the team ever since. Dave kicked things off with a fitting clip of Gonzo performing Billy Idol’s “Dancing with Myself” from Muppets Tonight.

What did you want to be when you grew up?

Dave grew up near the Walt Disney Studios in Burbank and wanted to work for Disney as a kid. Once Disneyland opened, he wanted to be an Imagineer. While that dream never came true directly, he did get to work with Walt Disney Imagineering on Muppet*Vision 3-D. He recalled that the camera rig had two cameras side-by-side that were very loud and sounded like a lawn mower, which made it difficult to hear the other performers he was interacting with.

Dave was 25 when he first saw Sesame Street and instantly felt like he wanted to be a part of it. He had already graduated from college and was working in Silicon Valley at the time. Everything Jim did was about having fun, he was the kind of man who would doodle during meetings. He shared that his first visit to the Walt Disney Family Museum reawakened his childhood dream of working for Disney by showing him the parallels between Walt Disney and Jim Henson. “In a way, I did get to work with Walt Disney, sort of. Another one,” he shared.

Which Muppet character resonates the most with you?

Every character Dave plays feels like a specific part of him, but he shared that Gonzo is the easiest for him to do. With Gonzo, Dave doesn’t have to think about what he’s doing because he’s so free that you can’t make a mistake. Audiences want to be surprised by Gonzo, so it’s almost better when he makes a mistake. Bunsen, on the other hand, is an “Intellectual construct” and Dave has to think more about his choices when playing the scientific doctor.

Do you have a favorite blooper?

It was hard for Dave to pick one and he’s only seen two bloopers from The Muppet Show since it was filmed, but he says there were many fun mistakes over the years that resulted in a lot of fun on set. One of the most famous bloopers is from Emmet Otter’s Jugband Christmas where a rolling drum refused to land in the right spot. He recalled Frank Oz and Jerry Nelson being confined beneath the set for around thirty-six takes before they got it right.

How do you perform multiple characters in the same scene?

It turns out that another performer will typically take over for one of the characters in a scene where the same performer would normally play both characters. Sometimes they pre-record the other characters' dialogue, other times another performer will do their best impersonation and the original actor might replace the audio in post production. He recalls a time on The Secret Life of Toys where they were short staffed and he had to do two characters talking to each other, which was difficult. On Fraggle Rock, he played Boober and there was an episode where the nervous character had a dream where he met his outgoing alter ego who then came back into the real world. A blue screen was used so that Dave could perform Boober and his alter ego Sidebottom.

Was it hard to switch from the Muppets to Fraggle Rock?

Fraggle Rock was a big tonal change for the Muppet performers, who were used to creating content for an older audience. Jim Henson’s goal for the show was to end wars, creating a series that taught kids about respect for other people, animals, and the planet. Dave remembers feeling constrained by the series at first, but he quickly grew to love it and what it stood for.

How do you make yourself disappear in a set under a puppet?

Dave talked about one of the weirdest devices he ever hid in on a set, which was for The Muppet Christmas Carol. He was puppeteering a character on top of a door and was in what felt like a coffin behind the door. When it was time to break for lunch, the crew forgot to let him out. He also shared that both Jim Henson and Frank Oz were prone to motion sickness so when they filmed the Muppets in a Disney park, it was usually Dave who would take over for Kermit and Ms. Piggy when they rode the Mad Tea Party, Big Thunder Mountain, and Star Tours. He said when you’re on the floor of a ride vehicle, you don’t feel the motion as much.

What was it like returning to the world from The Dark Crystal in the new Netflix series?

Dave recalled working on the original film in England and that the performers had been there on various back-to-back projects for almost seven years. One day, the puppeteers took Jim Henson to lunch and asked when they would be returning home. They got a little closer to home after The Dark Crystal when they moved to Toronto to work on Fraggle Rock. For the new series, Dave spent about five days on set playing a new character named Baffi.

What was it like working with David Bowie on Laybyrinth?

Dave didn’t get to work with David Bowie much because they didn’t have scenes together (he played Didymus, the jousting dog). But he did share that David Bowie was really nice and great to work with. Jim Henson was thrilled with the music Bowie did and his performance in the film. Dave mentioned a clip he saw of David Bowie recording with backup singers where he teaches them all of the harmonies, showcasing how involved he was with every detail of his music.

What was it like moving forward without Jim Henson after his passing?

It was Frank Oz who gave Dave the call that Jim Henson was in the hospital about to die. It was hard for Dave to believe because Jim Henson was so full of energy and one of the hardest workers he’d ever met. He was an incredible leader and a very kind person and it took him a while to really understand that it was happening. He flew from his home in California to New York to be with the rest of the Muppets team. Brian Henson flew in from London and they had a talk about what they would do next, which resulted in The Muppet Christmas Carol. Even today, he feels like Jim Henson’s spirit still drives the performers in everything they do, even the newer performers who never got to work with him. “Somehow they soaked up his philosophy through the screen.”

You performed “I’m Going to Go Back There Someday” from The Muppet Movie at Jim Henson’s memorial. What do you remember from that day?

It’s a foggy memory for Dave from the end of a whirlwind week following the loss of Jim Henson. He remembers that it was a rainy day and that the St. John the Divine Cathedral where it was held was beautiful. The Muppet Workshop spent a week making 5,000 butterfly puppets on wire so every member of the audience could hold one. As he sang the song, he was watching them flutter while on stage. “A true expression of Jim Henson’s spirit.”

This was yet another fun Happily Ever After Hours virtual event from The Walt Disney Family Museum. For the full schedule, click here.