The Walt Disney Family Museum’s fourth Happily Ever After Hours guest was composer Fabrizio Mancinelli, a lifelong Disney Fan who provided the music for the documentary film Growing Up with Nine Old Men and is currently working with Disney Legends Richard Sherman and Andreas Deja on the animator’s upcoming film Mushka. Here are ten things we learned from Fabrizio’s Q&A. 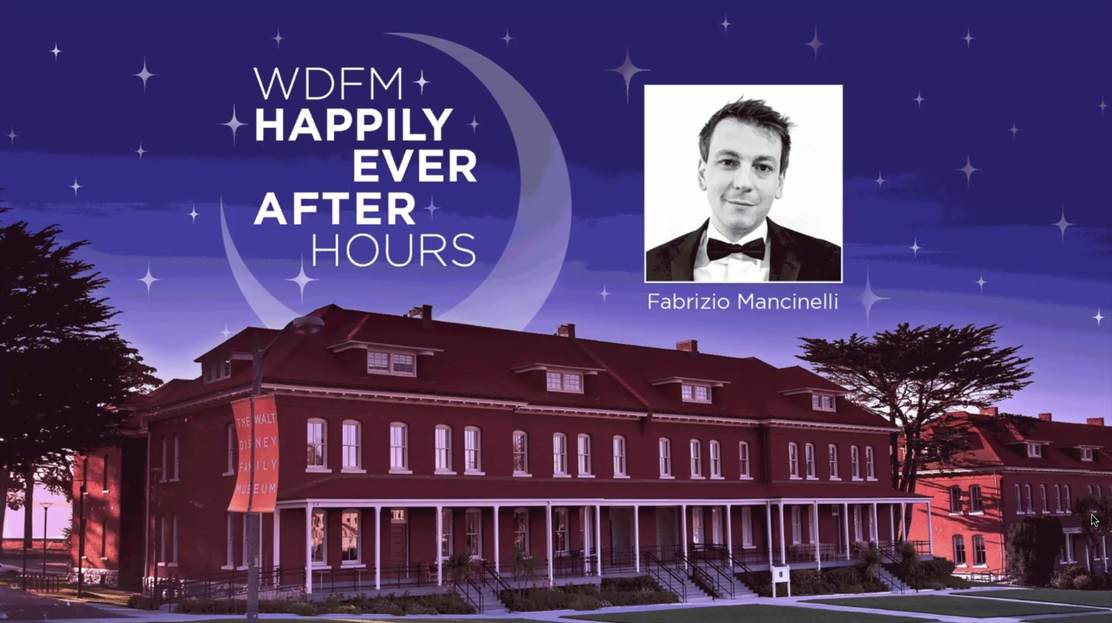 1. Fantasia Is The Film That Inspired Him Most

“I think it’s the most perfect marriage between music and film still today,” Fabrizio shared of his upbringing in a small medieval Italian town. Walt Disney’s concert feature made the composer want to be an animator, but he found he didn’t have the talent for drawing. He realized that the film also tells a story through music and was inspired to go to conservatory to study. There was also an Italian movie called Allegro Non Troppo, a parody of Fantasia, that was an inspiration to the young artist.

2. His Dream Was to Work for Walt Disney

Years of seeing Walt Disney’s name on movies and souvenir cards from Disneyland Paris made young Fabrizio want to work for Walt Disney someday. He vividly remembers the day he found out that Walt Disney had passed away decades ago through an article in Toppolino, Italy’s Mickey Mouse magazine. At the age of 18, he sent a demo CD of his work to Roy E. Disney and received a legal rejection letter, which he kept and showed off during the presentation.  “Years later when I got the contract for Growing Up with Nine Old Men, I put them together like this is the start and this is the end,” he shared. “It’s like coming back home to people who raised me without knowing me because I grew up watching the movies of the Nine Old Men.”

“I met Andreas [Deja] on August 24th, 2008. I was in LA, I also met Richard Sherman… it was Ollie Johnston’s memorial.” Fabrizio was studying at USC and made a visit to the Carolwood Pacific and Walt’s Barn where he met Michael Brogie. After talking, Brogie invited Fabrizio to the Disney Legend’s memorial where he rubbed elbows with Disney pioneers and made lifelong friends with some of them. One of his USC teachers was Leonard Maltin, who invited him to Andreas Deja’s Christmas Party. After returning to Italy, he would come back every December for the party. He has remained close friends with Andreas Deja ever since.

In the same way that Fabrizio Mancinelli remembers the day he met Andreas Deja and Richard Sherman, he also remembers the day he first met Diane Disney Miller. It was December 5th, 2009, and he shared a framed photo of the two together. He was visiting the Walt Disney Family Museum and first noticed Ron Miller for his unmistakable height, followed by Walt Disney’s daughter and the museum’s founder. He approached her to thank her for her contributions to the arts in L.A. with the Walt Disney Concert Hall and gave her a CD of his music. “She was so graceful,” he said. A year later he returned to the museum for a presentation by Alice Davis and Marge Champion and saw Diane again, who recognized him and approached to explain that she was unable to listen to the CD because it skipped in her player. “She was very interested in preserving the good name of Walt Disney not only as an entrepreneur or a brand name, but also as a genius producer of the 20th century.”

5. Alice Davis is his “American Grandmother”

“I call her my American adopted grandmother,” Fabrizio Mancinelli shared about his relationship with the Imagineer who created all of the costumes for it’s a small world. She was very influential on the way he navigates American culture. “She’s one of the most stubborn human beings that I’ve ever met. Stubborn in a way that she really wanted to do certain things in her life and she did.” Fabrizio hopes that he can give back to aspiring artists the way she has when he’s her age, naming her as a “Godmother” to so many artists in different mediums.

6. Richard Sherman is his Mentor.

“I never thought he would become a friend and a mentor to me,” Fabrizio explained. His first loves were opera, movies, and Disney, all of which influenced the path he took in life. He grew up on the music Italian national treasures like Gian Carlo Menotti and studied film composers like John Williams, Jerry Goldsmith, Elmer Bernsetein. From the Disney circle, Alan Menken, Stephen Schwartz, and Richard Sherman were inspirational.

Through his friendship with both Disney Legends, Fabrizio has been chosen to score Andreas Deja’s original film Mushka, collaborating with Richard Sherman on an original song. “I’m speechless every time I see that because of the style,” he explains about the upcoming film. “You can see the Disney greatness of the past without copying that.” He shared that Andreas Deja has created his own style for the film that’s like a moving picture book. He provided the arrangement for Richard Sherman’s song, which was recorded in February.

8. The Difference Between Composing for Live-Action Vs. Animation

“There is a total difference,” he explains, stating that not all composers agree on this. “On a live-action film, unless it’s an action movie or a fantasy where you have to address so many moments, the synchronization is less. On animation, it’s better to learn how to do synchronization. It’s so much more work.” He feels like animated films require more music to help underscore the on-screen action. “It’s an integral part of the process, I feel.”

“I think my favorite of modern time is Alan Menken because coming from theater, he knew exactly what was needed storytelling wise,” Fabrizio explained. But his favorite composer from the past is the Sherman Brothers. Fabrizio has a two-year-old daughter who was just introduced to The Many Adventures of Winnie the Pooh. He said that because the music does such a great job of helping the story along, she was able to understand everything. He gave Walt Disney a lot of credit for the music produced at the studio during his lifetime. “He was not a musician, but he had a tremendous ear.”

A true Disney fan, Fabrizio couldn’t pick just one. As a musician with a child, he’s very drawn to the interactive Steamboat Willie experience where visitors can play virtual instruments along with the animation. His other favorite part is a popular spot, the giant model of Disneyland as it never was, with all of Walt Disney’s ideas for the park represented. The experience takes Fabrizio back to his first visit to a Disney park everytime he sees it.

The Walt Disney Family Museum just announced new Happily Ever After Hours events and more ways to bring a piece of the museum home. Click here for more information, including how to register to participate in future events.