The Jungle Cruise: Adventure Game from Ravensburger was announced earlier this year at Toy Fair and brings a touch of Disney Parks magic to fans on June 1st. Grab your skipper hat and set sail for an adventure on the exotic rivers of the world with 2-4 players in this highly detailed game that lovingly celebrates the funniest attraction in any Magic Kingdom-style park. Corny jokes abound as you traverse the “Niles and niles” of spaces on this board. 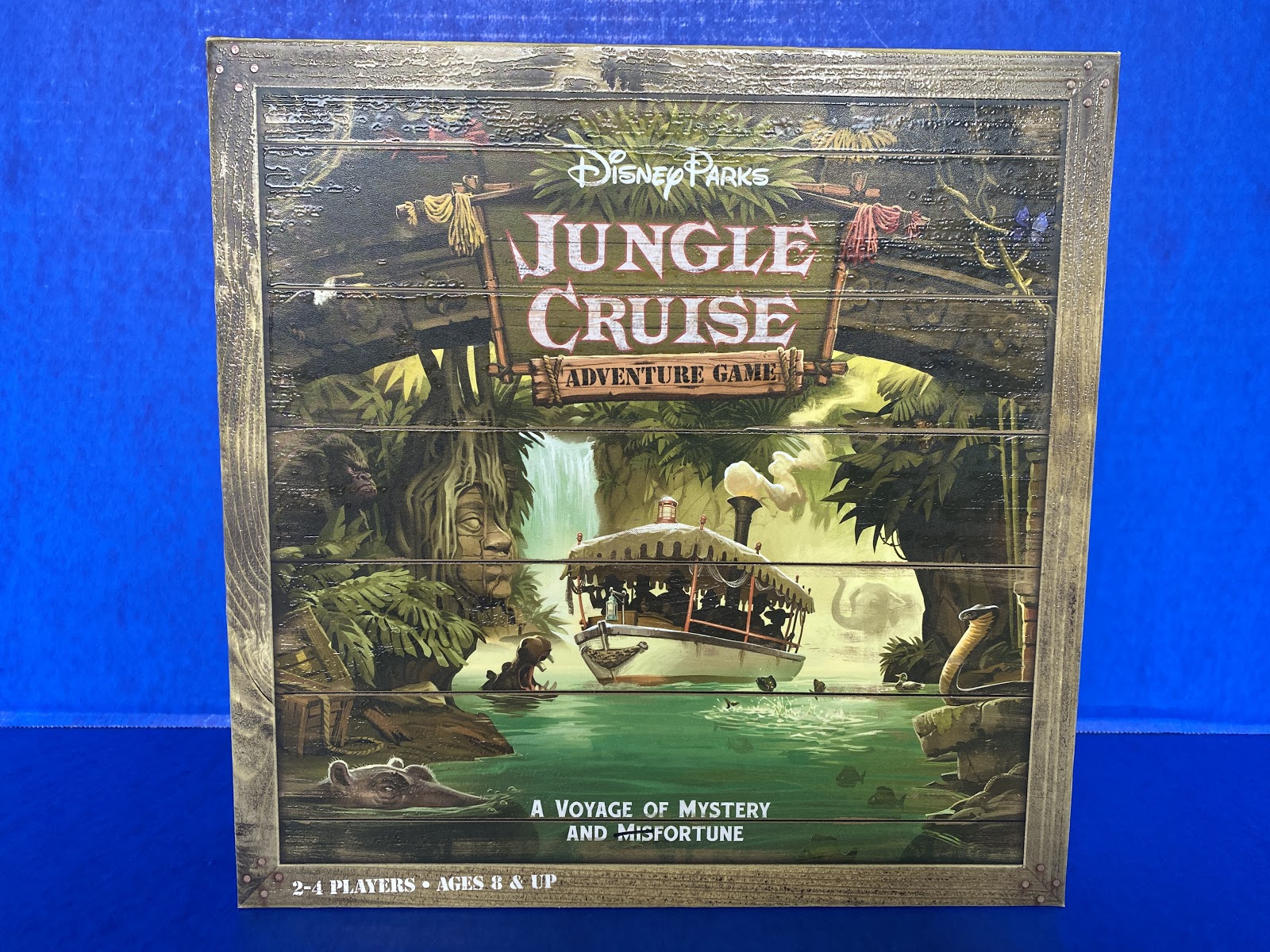 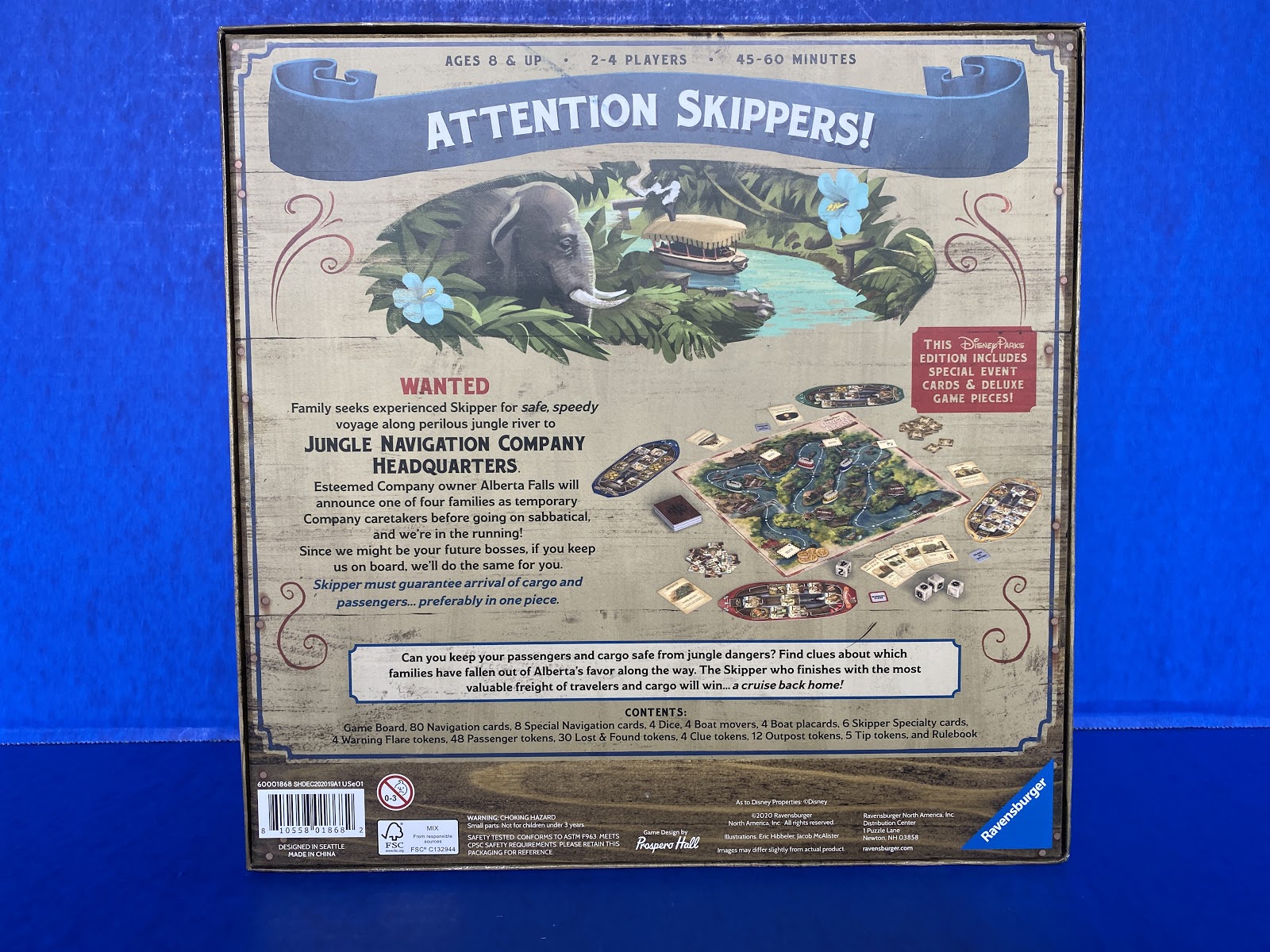 You’re a skipper for the world famous Jungle Navigation Company on your way to headquarters with a boat full of passengers. Along the way, you’ll encounter perils that might cause you to lose passengers, but you might also pick up some lost cargo. By the way, one of the four families on your boat has been chosen by the president of the Jungle Navigation Company, Alberta Falls, to be caretakers of the company while she takes a much-needed vacation. Try not to lose any of them! Players start by choosing from one of four different boats, which will be their pawn and help them keep track of their crew and cargo. The boats take their names from the multiple versions of the attraction with Amazon Annie, Congo Connie, Nile Princess, and Kissimmee Kate represented by the colors blue, green, yellow, and red. Players grab the crew tiles that correspond to their selected boat and distribute them on the boat’s four quadrants, which become important when you start drawing Navigation Cards. The quadrants are port, starboard, center, and stern. 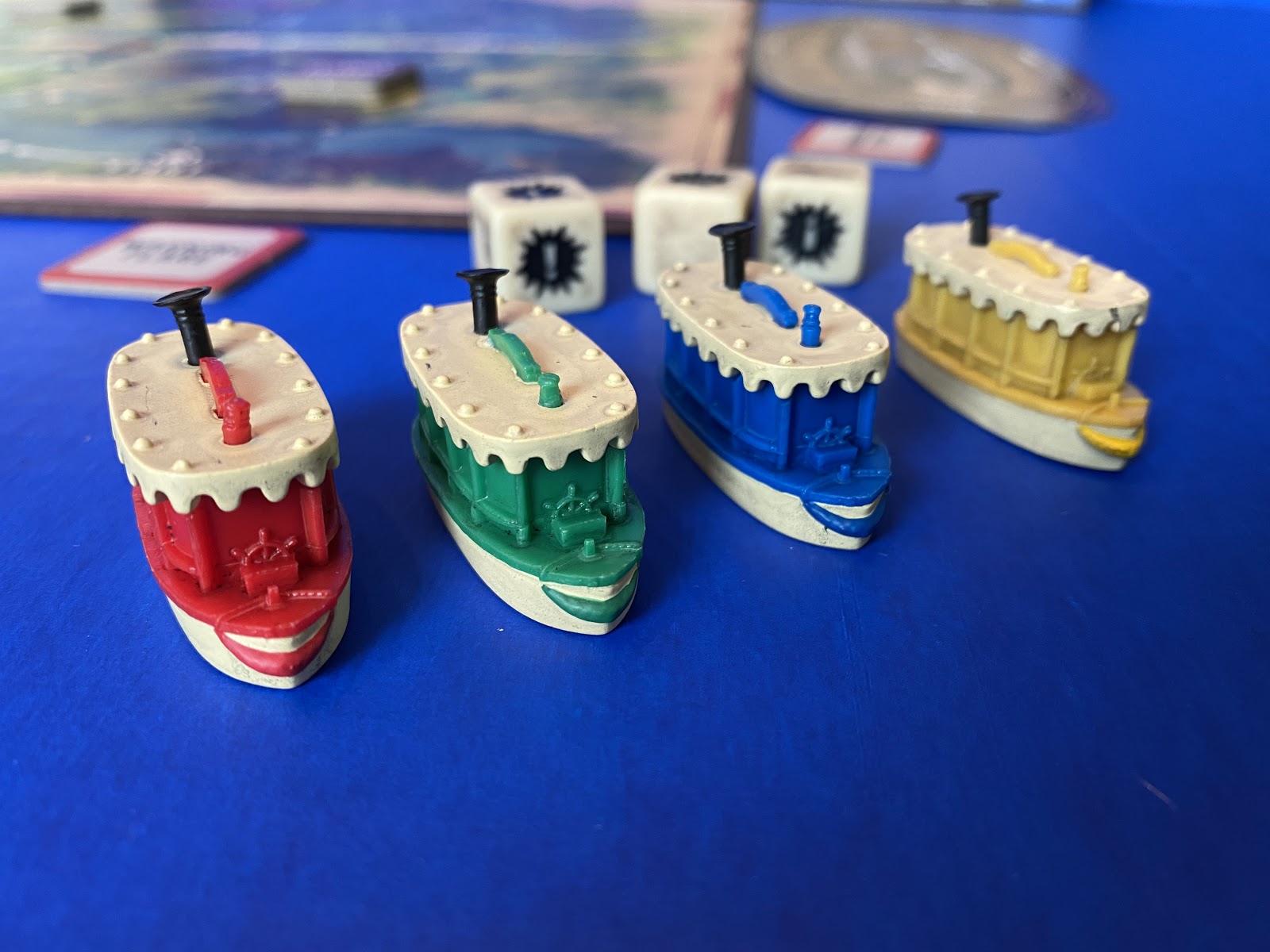 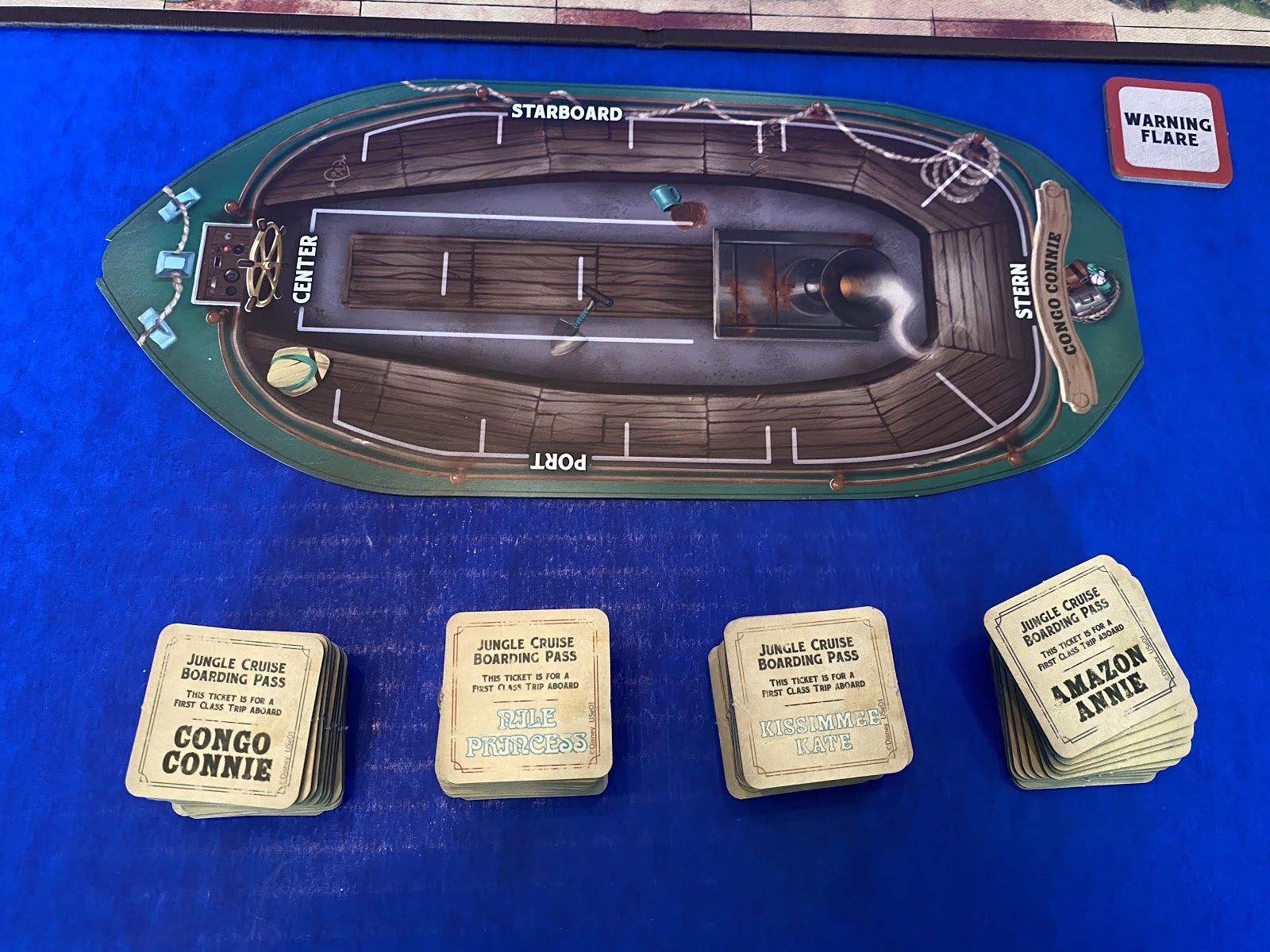 There are two types of cards. The Skipper Specialty Cards look like a pocket of a skipper’s shirt and contains one of six special abilities that assist them on each turn. Each player takes one at the start of the game. The other cards are Navigation Cards, which get shuffled into one desk that players draw from. Every time a player lands on a neutral space, they draw four cards, choosing the ones they want to play based on the number of spaces they moved during that turn (the max is four). These cards are themed to scenes in the attraction and contain jokes on them. There are three dice with “!” marks and players roll the number that corresponds to the danger on the card. The card also notes which section of the boat is being targeted. Players remove one crew or cargo from that section for every “1” they roll. 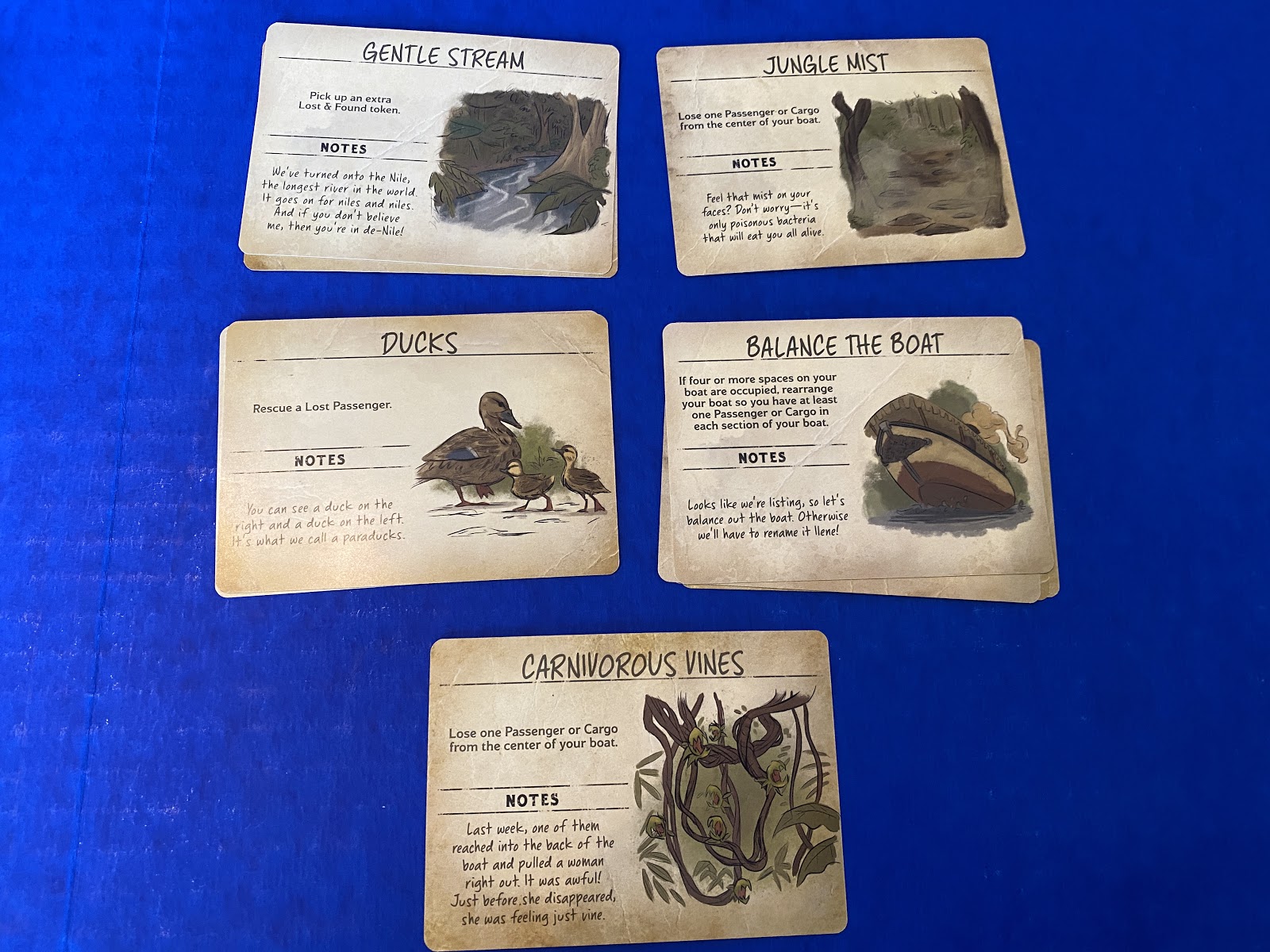 Each player receives a Warning Flare, which they can use for a reroll on a Navigation Card. There are four Outposts on the board where players must stop their turn when they pass. A used Warning Flare can be reactivated at an Outpost and players can also pick up Lost & Found items here, as well as at the start of every turn if they have an opening on their boat. There are three types of Lost & Found items, which become more important by the end of the game when each player’s cargo is evaluated to determine a winner. 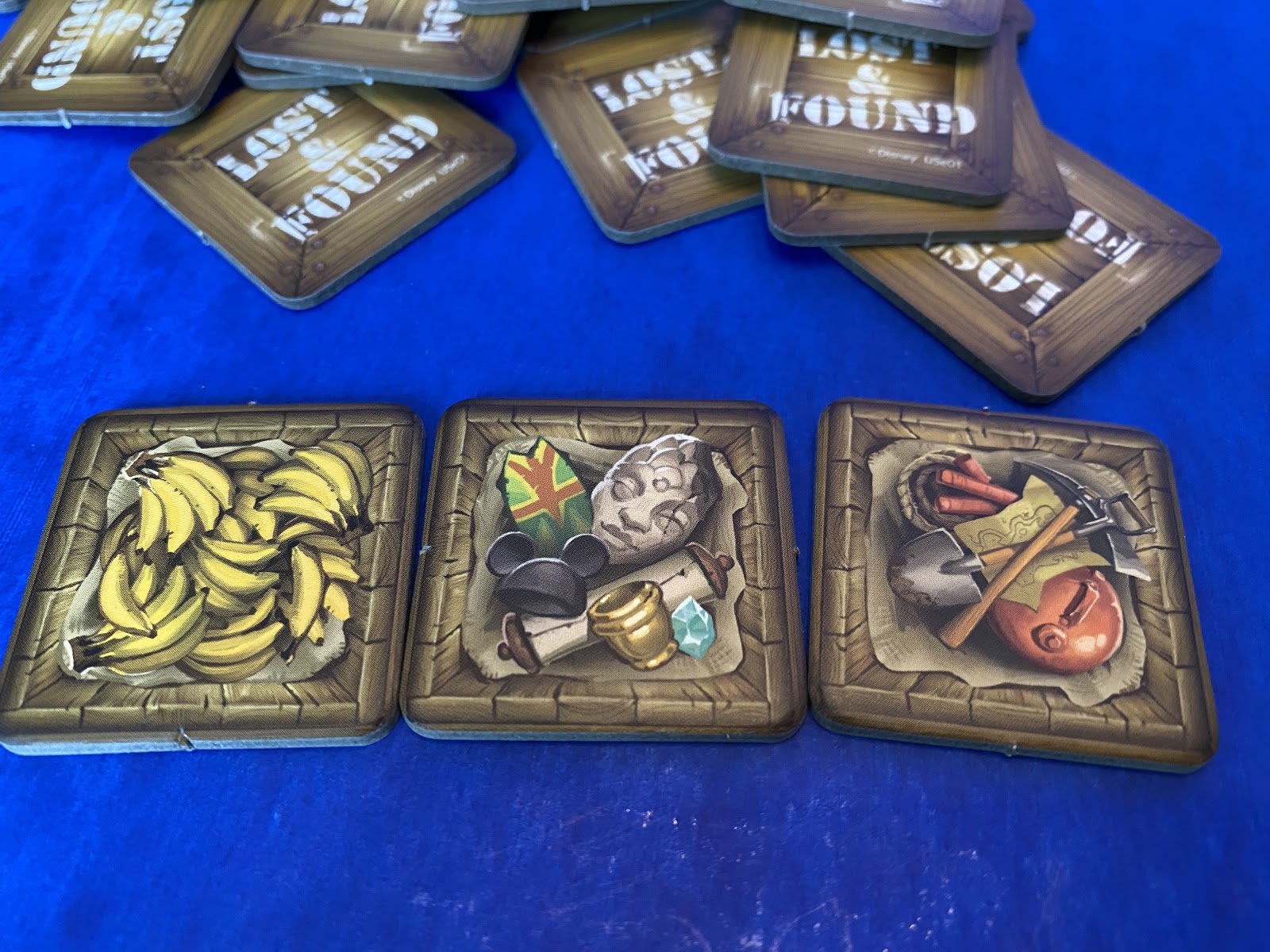 The goal of the game isn’t necessarily to be the first to arrive at headquarters, but to get there with the most number of crew and cargo. Bonus points are awarded for having a full set of all three types of cargo and passengers from the chosen caretaker family are worth more. Similar to Clue, there are tokens for the four families which get shuffled and distributed throughout the board. Players who take the longer routes through the board can see “Clues” by looking at the tokens that aren’t the chosen family. 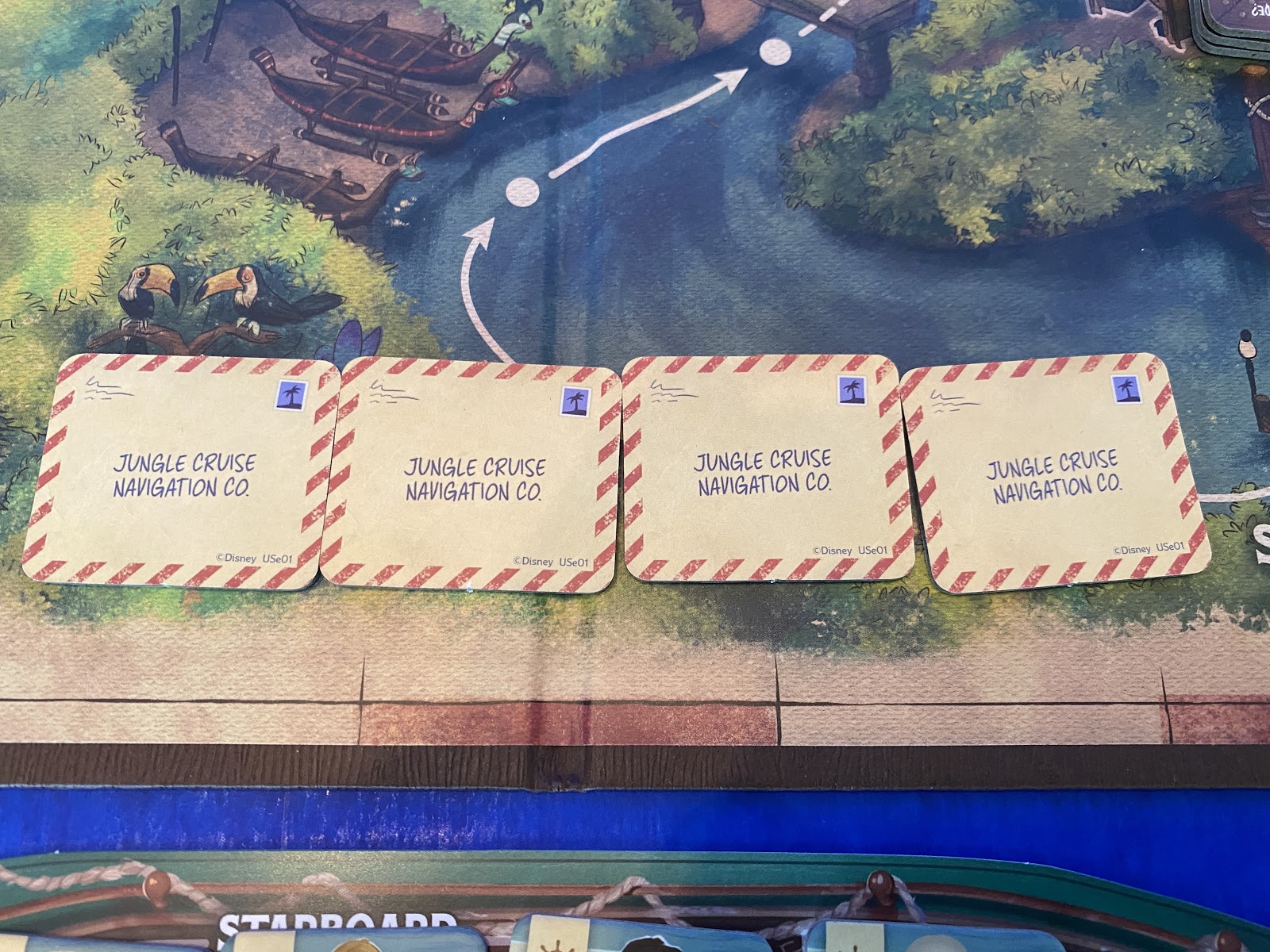 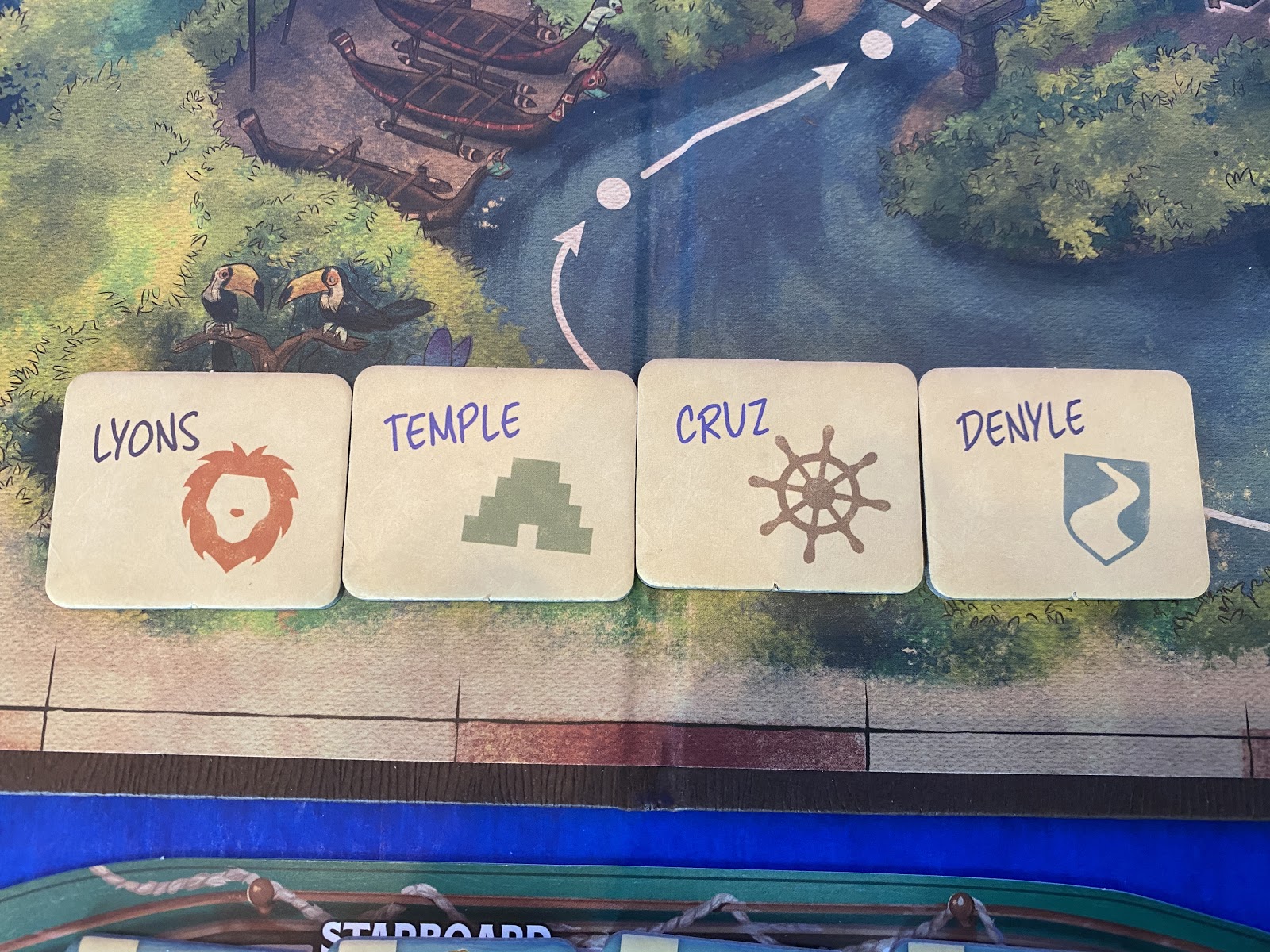 There is still an advantage to being the first to reach headquarters with tips that can be picked up on each skipped turn to add to your value. But truly the best strategy is to take your time and try to have a full boat when you arrive. Players can also rearrange their boat at the start of each turn and the instructions give a helpful hint: The safest place on the boat is in the center. 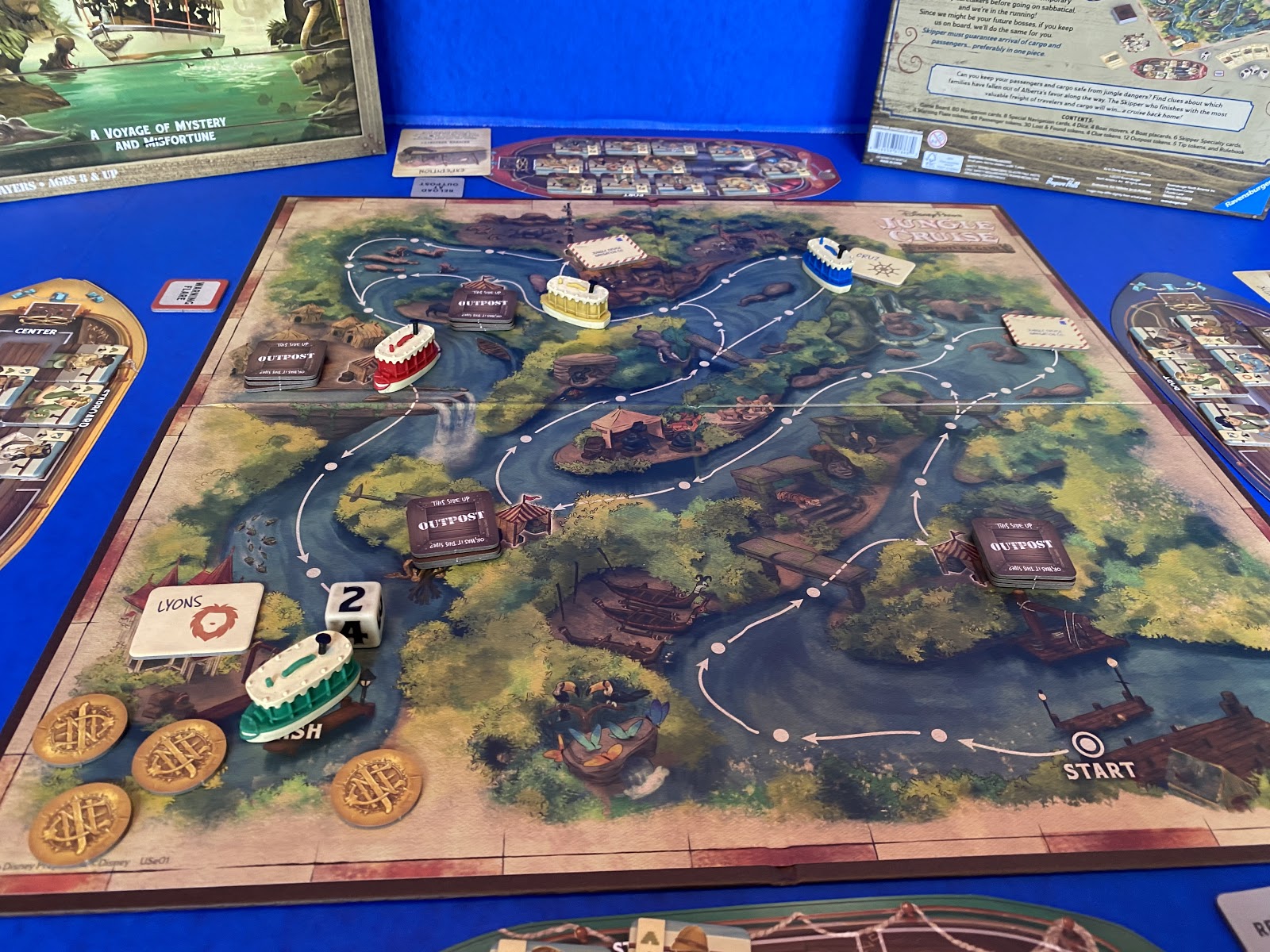 We had a lot of fun playing our review copy of Jungle Cruise: Adventure Game from Ravensburger. It allows Disney fans and families to bring home a piece of Adventureland and the game is even more fun the more you ham it up. Part of the game includes reading the jokes on the cards out loud. I hope you enjoyed this review. If you did, my name is Alex and this is LaughingPlace.com. If you didn’t, my name is Harvey and you’re watching TMZ.